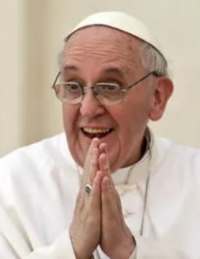 Two days ago, a female journalist asked the Pope how he reacted to the recent Open Letter accusing him of heresy.

His Humble Holiness responded: "With humor, my daughter," adding most condescendingly, "I also pray for them because they are wrong and poor people, some are manipulated. And who are those who signed...?"

"Who are those who signed?" They are your children, Holiness, whose souls should be your first responsibility.

I say "should be" because Francis evidently doesn't see it that way. He's above it! He hears credible accusations from competent sources and his heart overflows with sarcastic fellowship.

He laughs at them because it's hilarious, apparently, that a group of academics and clerics have placed their careers on the line because his pontificate has them at the end of their ropes.

The sheep are scandalized to the point of tears, and the shepherd mockingly asks:

(If you look very closely, you'll notice that's not actually Pope Francis. But I see why one might get confused.)

Give us a break, Holiness, please. Your humble pope shtick is getting old and tired, as the mob boss papal politician that you are reveals itself in all of its astronomical arrogance.

The tone Francis has here adopted strikes us less as that of the reasoned reaction of a responsible father and more like that of an impossibly insecure man whose ego simply cannot handle criticism.

Unfortunately, the choice is his, but his sheep are deserting this negligent and prideful shepherd in droves. They evidently smell the wolf under the shepherd's clothing.  Or perhaps they've just spied the telltale black sneakers where the shoes of the Fisherman are supposed to be.

Either way, the crowing of the cock is echoing all over as Peter tells the New World Order, "I don't know the Man signers."

[Comment Guidelines - Click to view]
The Remnant values the comments and input of our visitors. It’s no secret, however, that trolls exist, and trolls can do a lot of damage to a brand. Therefore, our comments are heavily monitored 24/7 by Remnant moderators around the country.  They have been instructed to remove demeaning, hostile, needlessly combative, racist, Christophobic comments, and streams not related to the storyline. Multiple comments from one person under a story are also discouraged. Capitalized sentences or comments will be removed (Internet shouting).
The Remnant comments sections are not designed for frequent personal blogging, on-going debates or theological or other disputes between commenters. Please understand that we pay our writers to defend The Remnant’s editorial positions. We thus acknowledge no moral obligation whatsoever to allow anyone and everyone to try to undermine our editorial policy and create a general nuisance on our website.  Therefore, Remnant moderators reserve the right to edit or remove comments, and comments do not necessarily represent the views of The Remnant.
back to top
Last modified on Saturday, June 1, 2019
Tweet