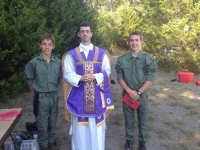 The Boy Scouts of America is considering filing for bankruptcy protection in order to negotiate with those who have sued in recent years. From FoxBusiness:

The organization is facing a shrinking membership and escalating legal costs related to lawsuits over how it handled allegations of sex abuse.

The Boy Scouts have been at the center of sexual-abuse scandals in the past, and the organization is facing a number of lawsuits that allege inappropriate conduct by employees or volunteers in incidents dating back as far as the 1960s.

...The organization has made news in recent years as it opened some of its programs to girls and transgender boys.

...The Boy Scouts group has drawn scrutiny over its slow pace to become more inclusive, including by lifting a ban in 2015 on gay men and lesbians serving in leadership roles.

...In the group’s latest annual report, Boy Scout officials said its future financial situation will partly depend on the outcome of sex-abuse-related litigation and future damages awarded.

REMNANT COMMENT: I beg to differ with Fox Business.  The Boy Scouts of America has drawn scrutiny over its "slow pace to become more inclusive, including by lifting a ban in 2015 on gay men and lesbians serving in leadership roles."  Oh, please! Yes, that's exactly what fathers like this writer were worried about: why can’t we get more homosexuals up in here?

Will these people never get over themselves!

The Boy Scouts of America drew scrutiny over precisely the opposite concern, i.e., the Scouts’ refusal to steer clear of crippling politicalcorrectomania.

The beliefs of Christian American families--the bedrock of the organization, historically, whose scriptures take a dim view of sodomy--were callously disregarded by the Boy Scouts of America, thus the need for bankruptcy protection here a few years later.

We're like the Who's down Whoville: these Grinchy ideologues can wreck age-old institutions all day long; they can legislate cherished American customs and traditions right out of existence with their ruthless fascism. But at the end of the day they can't take away our freedom to walk away.

The Boy Scouts of America have made their bed and now they've got to sleep in it.

We sincerely hope the Boy Scouts fade into obscurity.  They didn’t care about our children, and now we don’t particularly care about them. Good riddance, in fact!

Meanwhile, in God’s good Providence, a much better alternative presents itself. . .

[Comment Guidelines - Click to view]
The Remnant values the comments and input of our visitors. It’s no secret, however, that trolls exist, and trolls can do a lot of damage to a brand. Therefore, our comments are heavily monitored 24/7 by Remnant moderators around the country.  They have been instructed to remove demeaning, hostile, needlessly combative, racist, Christophobic comments, and streams not related to the storyline. Multiple comments from one person under a story are also discouraged. Capitalized sentences or comments will be removed (Internet shouting).
The Remnant comments sections are not designed for frequent personal blogging, on-going debates or theological or other disputes between commenters. Please understand that we pay our writers to defend The Remnant’s editorial positions. We thus acknowledge no moral obligation whatsoever to allow anyone and everyone to try to undermine our editorial policy and create a general nuisance on our website.  Therefore, Remnant moderators reserve the right to edit or remove comments, and comments do not necessarily represent the views of The Remnant.
back to top
Last modified on Tuesday, December 18, 2018
Tweet