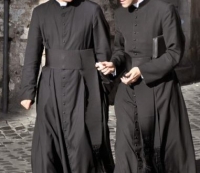 Over at FirstThings, several more sincere young clergy members manifest a comforting level of true Catholic instinct. God bless them, and may many more follow their example:

On our ordination days, each of us was asked by his ordaining bishop: “Do you promise respect and obedience to me and my successors?” Each of us answered in the affirmative, confident not in his own merits, but in the grace of God, who called each of us to priestly ministry in his Church. We are young Catholic clergy, and so we answered this question only a short time ago—some of us within the past year. And it is in the same spirit of respect and obedience that we write today. We wish to express our concern about the unfolding crisis of sexual abuse in the Church, especially the Church in the United States. Specifically, we are concerned about how this crisis relates to the Synod on the Faith, Young People, and Vocational Discernment, which is to take place in Rome in October.

Though the Synod Council could not have foreseen this when the topic was chosen three years ago, the Synod on Young People comes, to say the least, at an inopportune moment. The events of the past year demonstrate that the scandals that began to unfold in 2002—when many of us were children—are far from over. We believe that shining a light on these scandals, painful as it may be, is the only path to healing for the Church.

The lay faithful, whom we promised at our ordinations to pray for and serve unceasingly in the name of Christ and his Church, are wounded by these scandals and wondering whom to trust. Many young Catholics are particularly shaken. We stand with them in their anger, horror, and dismay. We also promised at our ordinations to discharge our priestly duties as worthy fellow workers with the bishops. This, we hope you will understand, has become far more difficult in just a short time. We see the anger and frustration of those for whom we serve, and we ourselves are unsure what else may be waiting in the shadows.

Fathers, some propose that the Synod on Young People should be postponed, even canceled, rather than proceed amid a scandal concerning the clerical sexual abuse of minors. In the event that it does proceed, we have concerns about the likely tenor of the discussion. But we also have hope, for the Synod presents an opportunity, if you are willing to seize it.

The Synod’s Instrumentum Laboris (working document) concedes too much to the sexual revolution, which has caused such great harm to young people. Our generation comes from “liquid” modernity. We have grown up in a culture hostile to all that the Church proposes: the life, death, and resurrection of Jesus Christ; the truths contained within Scripture; and the Church’s tradition as handed down from the Apostles until today, including her moral witness. We do our best to teach, preach, proclaim, and live these realities. So do many of our fellow young people.

When we read the Instrumentum Laboris, we do not find an extensive analysis of models that have proved successful in forming young people in the faith. Nor do we find guidance on how the socio-cultural concerns of young people can be raised and oriented toward a supernatural end. We find instead vague references to “some young people” who wish for this or that part of the Church’s teaching to change. But we know many young people who do not want the Church’s teachings to change, who instead want them proclaimed more vigorously—precisely because they see them as the antidote to the cultural wasteland in which we live. For this reason, we believe the Instrumentum needs substantial rethinking and revision. Only a powerful encounter with Jesus Christ and a joyful proclamation of the orthodox faith of the Church can inspire young hearts and fire young people to mission. Sociological analysis cannot achieve this.

We, as young people, know the toll of the sexual revolution in a visceral way: divorce, the unchecked pursuit of pleasure, objectification of women, sex trafficking, pornography, all of the horrors that precipitated the #MeToo movement, listlessness, despair, addiction. We already see the effects trickling into the next generation through smartphone addiction, teen depression and anxiety, and social media bullying. We don’t view these effects as liberating; we view them as shackling. And we think our peers are with us.

We grew up in a world that values radical autonomy above all else. We have all been compromised by it in one way or another. But it is a lie. And when young people realize they’ve been lied to, they go searching for answers. Then the Gospel of Jesus Christ manifests itself anew as liberation, as freedom from the shackles of our age, so that we instead become prisoners for the Lord, missionary disciples whose hearts are burning within them. We pray that the primary effect of this Synod will be an unabashed proclamation of this authentic Gospel for the young people of today.

Our culture is all too eager to sell us false idols. Only the Gospel, lived in its radical vigor, can satisfy. Christ alone is the answer to the challenges for our generation. May we embrace him and his call to holiness anew in this hour.

We're also reliably informed that dozens of young priests in dioceses near and far are refusing to take collections at Mass until their own chancery offices clean house. This is far from over. There's a civil war going on inside the Catholic Church and battle lines are forming, thanks be to God.

[Comment Guidelines - Click to view]
The Remnant values the comments and input of our visitors. It’s no secret, however, that trolls exist, and trolls can do a lot of damage to a brand. Therefore, our comments are heavily monitored 24/7 by Remnant moderators around the country.  They have been instructed to remove demeaning, hostile, needlessly combative, racist, Christophobic comments, and streams not related to the storyline. Multiple comments from one person under a story are also discouraged. Capitalized sentences or comments will be removed (Internet shouting).
The Remnant comments sections are not designed for frequent personal blogging, on-going debates or theological or other disputes between commenters. Please understand that we pay our writers to defend The Remnant’s editorial positions. We thus acknowledge no moral obligation whatsoever to allow anyone and everyone to try to undermine our editorial policy and create a general nuisance on our website.  Therefore, Remnant moderators reserve the right to edit or remove comments, and comments do not necessarily represent the views of The Remnant.
back to top
Last modified on Monday, September 24, 2018
Tweet

More in this category: « Humble Pope Unveils Picture of Dorian Gray Fessio to Pope: “Be a man, Francis!" »