Legatus to Help Defund the Vatican After Damning Viganò Testimony

Debris continues to fall from the two-week-old Viganò eruption, and the Vatican is still taking direct hits.

In a letter dated September 6, 2018, to the members of Legatus—an influential organization of business owners and CEOs—founder Thomas Monaghan of Domino’s Pizza fame, publicized the association’s decision to withhold its annual tithe to the Holy See:

“We have also had discussions regarding our (Legatus’) annual tithe to the Holy See, pertaining to how it is being used, and what financial accountability exists within the Vatican for such charitable contributions. The board has begun in dialogue long these lines, and in the meantime has decided to place the Holy See annual tithe in escrow, pending further determination (by the Board). Please certainly pledge our continued devotion to Holy Mother Church, and recognize the tithe has been an important commitment of Legatus since our founding. However, in light of recent revelations and questions, he believe it appropriate to respectfully request clarification regarding the specific use of these funds.” [See full letter below.]

Legatus is under the spiritual direction of Cardinal DiNardo, who said last week that the questions raised by Viganò’s Testimony “deserve answers that are conclusive and based on evidence."

National Catholic Register’s description of Legatus hints at why this is a big deal:

“Members must be Catholics in good standing and an owner, chairman, president or CEO of a business with a minimum of $6.5 million annual revenue and at least 49 employees, or, for a financial service company, with at least 10 employees and $275 million in assets under management. Membership grows through word of mouth, and the only advertisement is with bishops, who must give permission for a chapter to form in their diocese.” 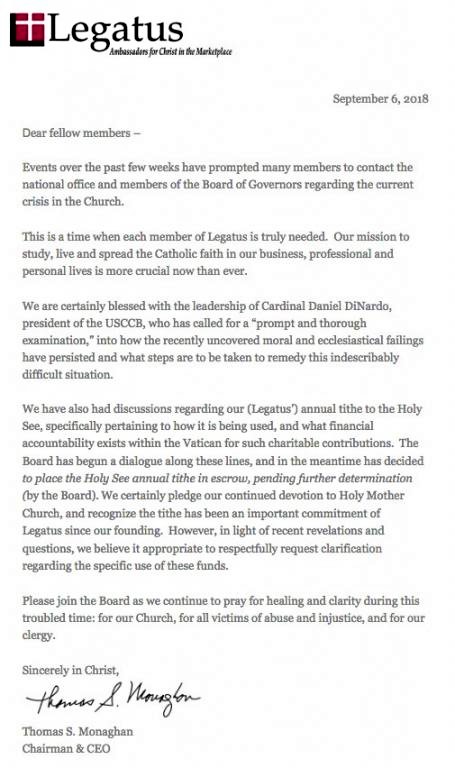 But what about Ave Maria University? How disappointing it must be for AVU founder, Tom Monaghan, to see his dream in the hands of a lifelong Democrat who has joined the shoot-the-messenger crowd down in Naples. A Democrat? Apparently so, if we’re to take President Jim Towey’s own word for it.

By the way, an article in today’s Naples Daily News not only cites The Remnant’s opposition to President Towey’s decision to provide cover for Francis, but also provides the latest update on a growing list of AMU alumni who are not standing for it:

Ave Maria University President Jim Towey’s statement in support of Pope Francis has prompted a swift backlash from several members of the Catholic community, including a group of nearly 70 alumni who signed an open letter asking he make a formal retraction. Towey has since amended his original statement and wrote a follow-up letter apologizing for some of his words, but he maintained his support of Pope Francis…A priest identified as Father John Paul Echert wrote a letter published in The Remnant, a Catholic newspaper, that said he was “utterly astonished and appalled” by Towey’s words.

Hats off to Mr. Monaghan and his Legatus organization for a courageous decision to help defund the Vatican, at least until Archbishop Carlo Viganò’s credible accusations against Pope Francis have been thoroughly investigated and steps taken to reform and restore a Catholic hierarchy in obvious moral and spiritual chaos.

[Comment Guidelines - Click to view]
The Remnant values the comments and input of our visitors. It’s no secret, however, that trolls exist, and trolls can do a lot of damage to a brand. Therefore, our comments are heavily monitored 24/7 by Remnant moderators around the country.  They have been instructed to remove demeaning, hostile, needlessly combative, racist, Christophobic comments, and streams not related to the storyline. Multiple comments from one person under a story are also discouraged. Capitalized sentences or comments will be removed (Internet shouting).
The Remnant comments sections are not designed for frequent personal blogging, on-going debates or theological or other disputes between commenters. Please understand that we pay our writers to defend The Remnant’s editorial positions. We thus acknowledge no moral obligation whatsoever to allow anyone and everyone to try to undermine our editorial policy and create a general nuisance on our website.  Therefore, Remnant moderators reserve the right to edit or remove comments, and comments do not necessarily represent the views of The Remnant.
back to top
Last modified on Friday, September 7, 2018
Tweet

More in this category: « Pope to Suspend Viganò? Another Bishop (Grand Rapids) Stands with Viganò »