Bless Me, Father, For I Am Going Trick-or-Treating 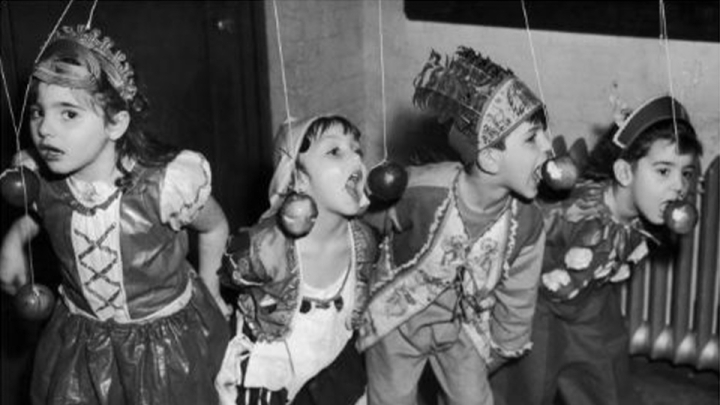 Children celebrate at a Halloween Party in NYC circa 1940

In a few hours, I’ll be taking my youngest son trick-or-treating in a wonderful old neighborhood in smalltown Wisconsin. We’ve been “doing Halloween” there for years, with relatives who live there year-round.

Call me a sentimentalist, but some of my fondest childhood memories date back to Halloweens from a long time ago.  And though this is not meant to be a comprehensive treatment of the question, here are a couple of thoughts on Halloween, hastily jotted down just before heading out the door.

Looking back, the runup to Halloween was the best part. Trying to decide what “to be”, picking out pumpkins, making a scarecrow for the front yard that was bound to terrify Mother.

The night before Halloween meant carving pumpkins, telling ghost stories, and maybe – if we were lucky – Arsenic and Old Lace on TV in those pre-VCR days of long ago.

Halloween is part of a Catholic Holy Day tradition that dates back to the 9th century. All the best days of the year in my childhood had deep Catholic roots.  And Halloween was no exception.

Then there was trick-or-treating. My Irish-Catholic mother would take us out for what seemed like hours and miles of fun. There was always some problem with my costume, too -- not enough string to hold the pillow in place for the fat-guy suit, a slipping wig, a dragging sword, the eyeholes in the sheet not cut quite wide enough to see through in that scariest ghost costume ever!

Man, what a blast! We’d stay out for hours amid glowing pumpkins on front porches, little goblins and witches, pirates and cowboys, hurrying past in the darkness, all of us on a wild quest to fill pillowcases with Snickers, Three Musketeers, Butterfingers, and my favorite – the $100,000 Candy Bar.

After the Halloween hunting and gathering had run its course, it was back to the living room floor, where – still in costume – the treasure would be poured out, trades made, and stories told all while pumpkin candles gradually burned themselves out.

The trick for my mother was getting us into bed in time to get up for Mass the next morning. It was the great Feast of All Saints. Halloween is part of a Catholic Holy Day tradition that dates back to the 9th century. All the best days of the year in my childhood had deep Catholic roots.  And Halloween was no exception.

Must we abandon our good and innocent traditions just because some lunatics want to turn our old Holy Days into celebrations of the macabre?

And it was fun! My father used to tell stories of the pranks he’d played on Halloween back in the 1920s. One of the favorites was something called “soaping windows” where, apparently, they’d take bars of soap and rub it on windows so neighbors couldn’t see out.

My father’s Halloween stories were similar to those depicted in the 1944 classic film, Meet Me in St. Louis, starring Margaret O’Brien and Judy Garland. The famous Halloween scene is a favorite of my children today:

Margaret O’Brien deserved an Oscar for that!

That was Halloween.  It was mischievous but innocent, and everyone knew that rights of passage were going on out there in the neighborhoods. There was no malice, and there certainly was no “satanism”, which is why I don’t believe it’s necessary to freak out (if you’ll pardon the pun) over trick-or-treating today.

Evil people today are going to do evil things, and on Halloween especially. But must we abandon our good and innocent traditions just because some lunatics want to turn our old Holy Days into celebrations of the macabre?

Some good Catholics might here object: “Halloween is about ghosts, and I do not believe in ghosts!”

Well, yes you do! “In the Name of the Father and of the Son and of the Holy GHOST” ….remember?

Like Christmas, Halloween traditions go way back into the days of old Christendom.

Catholics certainly do believe in ghosts. On our deathbeds, each of us will “give up the ghost.”  And, for that matter, what are ghosts if not poor souls in purgatory, some of whom are allowed to come back from the other side to remind us to pray for them.

Some of “scariest” ghost stories I’ve ever read, in fact, are included in Fr. F. X. Schouppe’s magnificent book: “Purgatory: Explained by the Lives and Legends of the Saints.” If you don’t believe in ghosts, then chances are you never read Father Schouppe’s book.  Haunted houses, haunted monasteries, even haunted churches – these are often the stories of poor souls asking for prayers.

Like those associated with Christmas, Halloween traditions go way back into the days of old Christendom. The custom of trick-or-treating on Halloween, for example, can be traced back to belief that the Poor Souls in Purgatory sometimes roam the earth looking for those who would pray for the repose of their souls.  One thinks of Jacob Marley from The Christmas Carol, for example.

A quick Google search reveals that European children five centuries ago, went door-to-door in costume, performing short scenes or parts of plays in exchange for food or drink. Sound familiar?  "A soul-cake, a soul-cake, have mercy on all Christian souls for a soul-cake." — they shouted on Eve of All Saints Day, aka: All Haloes Eve…what was to become Halloween.

In centuries past, it was not Satanism, but, yes, people did dress in the costumes of evil creatures so as to provide foils for those dressed as saints and angels.

People would visit their neighbors’ houses and ask for soul-cakes in return for praying for the souls of their faithful departed. It was known as 'Souling' and was recorded in parts of Britain, Flanders, southern Germany, and Austria.

In Ireland, there was "guising", where children would go from door to door in disguise, asking for gifts, food, coins or "apples or nuts for the Halloween party".

In Scotland, so says Wikipedia, they went house to house in white with masked, painted, or blackened faces, reciting rhymes and often threatening to do mischief if they were not welcomed. They sometimes used pumpkins or other gourds to collect their candy or apples, the origins of trick-or-treating having to do with charity and almsgiving, as well.

Tonight, many of the older generation will be sitting in their living rooms with huge bowls of candy in their laps, waiting for the little children to come and shout “Trick-or-Treat!” outside their front doors.

In Portugal, children go from house to house on All Saints Day and All Souls Day, carrying pumpkin-carved lanterns,  asking everyone they see for Pão-por-Deus ("Bread for God"), saying "It is for me and for you, and to give to the deceased who are dead and buried". Thus, the connection between Halloween and the dead, as in – the Poor Souls in Purgatory.

You get the idea. In centuries past, it was not Satanism, but, yes, people did dress in the costumes of evil creatures so as to provide foils for those dressed as saints and angels. To this day, in some traditional Catholic communities, young people dress as angels and wage a Halloween war on rivals dressed as devils. (The angels always win, by the way.)  And this goes back to the early festivals of the Catholic countries of Christendom.

So, let’s not throw the baby out with the bathwater. Let’s let our children be children. Let’s take care of them, of course, take due precautions, but have fun with them on Halloween and then go to Mass in the morning.  At least that’s how I see it.

Also, let’s not forget all the older people living in a world they hardly recognize anymore. Tonight, they’ll be sitting in their living rooms with huge bowls of candy in their laps, waiting for the little children to come and shout “Trick-or-Treat” outside their front doors. They enjoy guessing who the kids are dressed up as, and our children will thank them, practice manners, charity, neighborly kindness, and good fun.

For older folks, the Halloween tradition brings them back to their childhood, to a better world, to a more normal time.  Let’s not let this evil world deprive us of these beautiful little customs.  Instead, let’s let goodness overpower evil and light obliterate the darkness.

Happy Halloween, and a blessed Feast of All Saints, too.

[Comment Guidelines - Click to view]
The Remnant values the comments and input of our visitors. It’s no secret, however, that trolls exist, and trolls can do a lot of damage to a brand. Therefore, our comments are heavily monitored 24/7 by Remnant moderators around the country.  They have been instructed to remove demeaning, hostile, needlessly combative, racist, Christophobic comments, and streams not related to the storyline. Multiple comments from one person under a story are also discouraged. Capitalized sentences or comments will be removed (Internet shouting).
The Remnant comments sections are not designed for frequent personal blogging, on-going debates or theological or other disputes between commenters. Please understand that we pay our writers to defend The Remnant’s editorial positions. We thus acknowledge no moral obligation whatsoever to allow anyone and everyone to try to undermine our editorial policy and create a general nuisance on our website.  Therefore, Remnant moderators reserve the right to edit or remove comments, and comments do not necessarily represent the views of The Remnant.
back to top
Last modified on Tuesday, November 1, 2022
Tweet

More in this category: « Francis’s Prayer for Peace Highlights Why We Will Have None Don’t Catch on Fire »