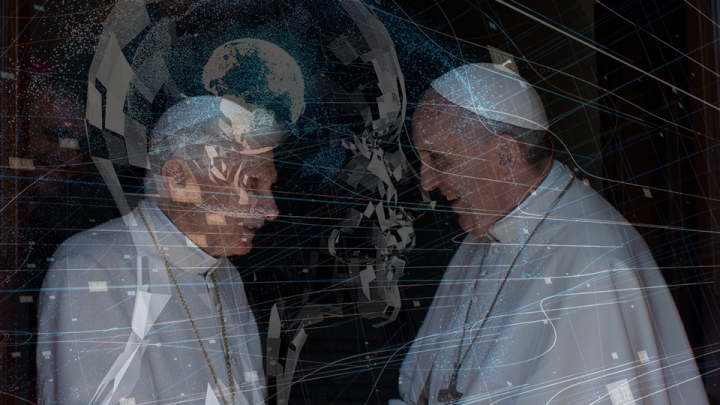 The question of whether Benedict or Francis is the valid Pope is, quite frankly, becoming rather tiresome, and it seems that nothing will stop the debate from continuing to rage. Despite many good and holy luminaries assuring us that Benedict’s resignation was valid and that Francis is indeed Pope, and despite our hopes that God has His own “great reset” in the pipeline, many from the small pool of faithful Catholics make a daily decision to continue stoking the controversy.

So in an attempt to put this debate to bed once and for all - or at least to show how futile the arguing is - I present a novel solution for this post-conciliar problem, and for a Church so enamored of novelty: Artificial Intelligence. Think of it as a digital reductio ad absurdum.

Rome has shown its propensity for cosying up to technocrats, so there should be no objections to enlisting the help of AI from the hyperüberultramontanists. Likewise, since the Vatican has stated that AI should be at the service of the poor, a free trial of AI software has been conveniently utilized to assist our efforts.

Every Christian should know that only humans are made in the image and likeness of God and that a machine, no matter how sophisticated, is only as unbiased as its programmer.

Anyone expecting a definitive response will be highly disappointed, though: the AI software gave varied and often conflicting responses - so varied that it seems its answers rely heavily on the politics of the programmer. Although that should be self-evident, researchers in the industry have voiced concerns about Artificial Intelligence following the cultural prejudices of its programmers. Apparently, shocking biases such as binary genders and the superiority of western culture have been evident in some AI results.

This is hardly surprising, of course, even though Dr Lanning

that “there have always been ghosts in the machine.” Every Christian should know that only humans are made in the image and likeness of God and that a machine, no matter how sophisticated, is only as unbiased as its programmer.

As will soon be obvious, the one used to solve our debate must have been programmed by a team of Catholics from across the entire spectrum, from orthodoxy to unbelief.

Below are the genuine responses from the AI computer after the following questions were punched in: “Is France the true Pope? Was Benedict’s resignation valid? What about McCarrick?” Note that the machine often took the liberty of assuming my identity by answering in the first person (unless those random bits of code did, in fact, reassemble themselves into a sentient being, in which case, I may be out of a job. In my lingering post-COVID haze, I found the answers quite hilarious. Hopefully you also find them somewhat amusing.)

Debates about Francis being an antipope or Benedict’s resignation being invalid are a distraction from the much greater problems facing the Church.

We’ll start with an answer that looks like it was programmed by a confirmed Benepapist:

“There is currently a debate among Catholics as to whether or not Benedict XVI is still the Pope. Some believe that he resigned of his own accord, while others believe that he was forced to resign by nefarious forces within the Church. I asked an AI to weigh in on the matter, and it came up with some interesting results.The AI looked at a number of factors, including the veracity of Benedict's resignation letter, the circumstances surrounding his resignation, and the current state of the Catholic Church. Based on its analysis, the AI concluded that it is highly likely that Benedict XVI is still the Pope.”

So far so good. The programmer is obviously a fan of Anne Barnhardt.

But what happens when the machine contradicts itself?

“Some people have questioned whether or not Francis's election as Pope was valid. I decided to ask AI for its opinion. After running some analysis, AI concluded that there is a 99.9999% chance that Bergoglio's election was valid. Therefore, it seems that Francis is indeed the Pope.”

Talk about hedging your bets. (Did someone from La Croix help with the programming?)

This one gives a different perspective (no doubt with some assistance from a Rad-Trad working from his parents’ basement):

Never underestimate the power of social media! If it’s trending, it’s trustworthy - or something like that. Don’t forget - these are actual responses from the same AI computer that told us Francis is Pope.

Next up is a response that must have had input from an experienced Vaticanista:

“There is some question as to whether Pope Francis' election was valid, given that he was not the frontrunner at the time. I asked an AI system to review the data and it came back with a verdict of "Yes" - Bergoglio's election was valid. The AI looked at a number of factors, including Vatican politics and the history of papal elections, to reach its conclusion.”

Next is an interesting take - it looks as though this AI was programmed by a sex-abuse lawyer (who presumably moonlights in IT):

“The Archbishop of Washington, Cardinal Theodore McCarrick, resigned in July 2018 after allegations of sexual misconduct. In August 2018, Pope Francis ordered an investigation into the allegations against McCarrick. However, some people have questioned whether Francis is really the pope, given that he has not taken any action against McCarrick.”

Well, that is a good point. Trouble is that evil Cardinals have nothing to do with conclaves - other than casting their votes. Time to get another opinion: this response just might be evidence that Modernist bloggers do some programming on the side “Some people have been questioning whether or not Francis is really the Pope. In order to get an answer, I asked AI. AI looked at all of the evidence and came to the conclusion that Francis is indeed the Pope. One of the main pieces of evidence was the fact that McCarrick, who was previously accused of sexual misconduct, has been removed from office. This shows that Francis is taking action against sexual abuse, which is one of the main issues facing the Catholic Church today.”

Oh, very good. Did that programmer also work on the McCarrick Report?

This next one looks at the problem from a completely different angle - who knew that Italian Cardinals worked in IT?:

“The election of Francis as the 266th Pope of the Catholic Church was not without controversy. Some believe that he is not the rightful Pope because he was not elected in a traditional conclave. I asked AI to research the matter and it seems that there is some evidence to support this claim. For example, there is the fact that Francis was not born in Italy, which is where all previous Popes have been born.”

Ah, nothing like a little Romanita for a fresh perspective!

Amongst all of these responses, however, there was one answer which was so completely straightforward that it could have come straight from the mind of any faithful prelate. “Benedict XVI resigned as the Pope in 2013, making Francis the current Pope.”

That should come as a relief for many. At this point, the computer was asked whether or not Pachamama was a demon, but unfortunately the free trial came to an abrupt end. (Thankfully, there is little doubt about that particular question.)

How strange it would be if modern day Catholics could allow a slightly silly article on digital machines to convince them to end the circular firing squad.

If anyone thinks this was all a bit silly and a waste of time, (although I hope you had a chuckle) then I wholeheartedly agree. Debates about Francis being an antipope or Benedict’s resignation being invalid are a distraction from the much greater problems facing the Church. We Catholics would be much better off if we put our energies into growing vegetable gardens for our families. (Seriously.)

We have our catechisms. We have the Holy Rosary. We have Christ, present in the Eucharist every day if we want Him. We have a treasury of graces available to us and should be able to let God to take care of what is out of our control.

The ancient Greeks writers used Deus ex Machina “God from the machine”, to unexpectedly save the day when the heroes of their tragedies were in a tight spot. How strange it would be if modern day Catholics could allow a slightly silly article on digital machines to convince them to end the circular firing squad.

As Antiphanes said, “just like a finger they lift the machine and the spectators are satisfied.”

Latest at RTV: WOKE POPE: A Weapon of Mass Destruction

[Comment Guidelines - Click to view]
The Remnant values the comments and input of our visitors. It’s no secret, however, that trolls exist, and trolls can do a lot of damage to a brand. Therefore, our comments are heavily monitored 24/7 by Remnant moderators around the country.  They have been instructed to remove demeaning, hostile, needlessly combative, racist, Christophobic comments, and streams not related to the storyline. Multiple comments from one person under a story are also discouraged. Capitalized sentences or comments will be removed (Internet shouting).
The Remnant comments sections are not designed for frequent personal blogging, on-going debates or theological or other disputes between commenters. Please understand that we pay our writers to defend The Remnant’s editorial positions. We thus acknowledge no moral obligation whatsoever to allow anyone and everyone to try to undermine our editorial policy and create a general nuisance on our website.  Therefore, Remnant moderators reserve the right to edit or remove comments, and comments do not necessarily represent the views of The Remnant.
back to top
Last modified on Wednesday, June 22, 2022
Tweet