The Stampede of the Green Lemmings 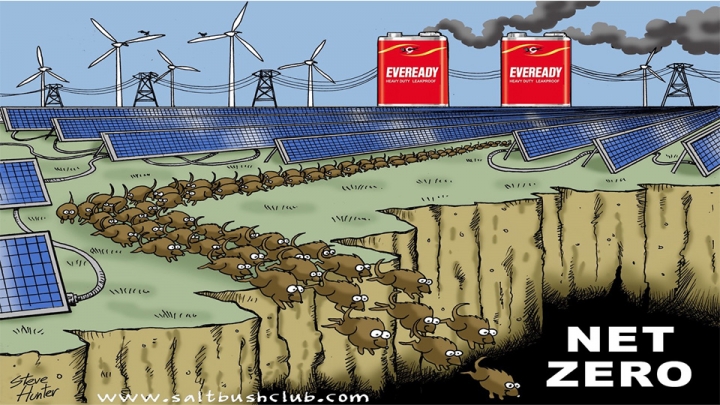 They are leaders in the Stampede of the Green Lemmings.

Solar energy has a huge problem. Even on sunny days almost nothing is generated to meet the demand peaks around breakfast time and dinner time - the solar energy union only works a six-hour day, goes on strike with little warning, and takes quite a few sickies.

So, for at least 18 hours of every day, electricity must come from somewhere else. Then around noon, the millions of solar panels pour out far more electricity than is needed, causing electrical and financial chaos in the electricity grid.

Naturally our green “engineers” see wind power as filling the solar energy gaps. But wind power has a union too and they take lots of sickies when there is no wind over large areas of the continent. And they down tool in storms, gales or cyclones in case their whirling toys are damaged.

So the green planners claim that batteries can solve these intermittent problems of the green energy twins.

They will need to be humungous batteries.

Batteries are just a crutch for a crippled generation system. And with fierce lithium battery fires reported regularly, who wants a humungous fire-prone battery over the back fence or in the basement?

A battery is not a generator of electricity – every battery (including Snowy 2) is a net consumer of electricity. Batteries are very expensive, most lose capacity as they age, and every conversion between DC storage and AC transmission triggers energy losses. To collect, back up and re-distribute green electricity will require a continent-spanning spider-web of transmission lines with all the costs and energy losses that network entails.

Still nights, and calm cloudy days, are what really expose the problems of wind-solar-plus-batteries.

Suppose electricity consumers require 100 units of electricity every day. A well designed coal, nuclear or gas power station can do that, 24/7, day after day, whatever the weather.

But to insure a wind/solar system against, say, 7 days of calm/cloudy weather would require a battery capable of storing 700 units of electricity. To re-charge this huge battery while still supplying consumers will require much larger wind/solar generating capacity. However if several weeks of windy/sunny weather then occur, this big battery will sit idle, connected to a bloated expensive generation system that is capable of delivering far more power than is needed.

Sunny/windy weather brings a deluge of green energy, causing power prices to plunge at irregular intervals, and forcing reliable generators to stop producing and lose money. Eventually they will close. Once all coal-gas generators are all gone, every (inevitable) green energy drought will awaken the spectre of extensive blackouts.

On top of all these practical problems of green energy, we have the massive carbon credits scam, where speculators sell green fairy stories to greedy bankers, and real producers are forced to buy these fictitious “products”, passing the costs onto real industry and consumers.

Australia is following the green energy lemmings of Europe.

Germany once produced abundant reliable electricity from coal and nuclear power – the backbone for German industry. Then green ants started nibbling at this backbone, replacing it with wind-solar toys. Now Germany has expensive electricity, a grid in danger of collapse and must rely on imported gas from Russia, nuclear power from France or hydro-power from Scandinavia.

UK is also following similar foolish energy policies, even banning exploration of their own oil/gas resources.

Australia is almost alone in the southern oceans, with no near neighbours to buy, beg or borrow electricity from. We cannot afford to follow the green energy lemmings or their billionaire pied pipers.

The dangers of explosions from battery farms:
https://www.dailymail.co.uk/news/article-9775467/UKs-battery-farms-spark-fears-explosions.html

The Impossible Costs of a fully wind/solar energy system:
https://www.manhattancontrarian.com/blog/2022-1-31-more-focus-on-the-impossible-costs-of-a-fully-windsolarbattery-energy-system

[Comment Guidelines - Click to view]
The Remnant values the comments and input of our visitors. It’s no secret, however, that trolls exist, and trolls can do a lot of damage to a brand. Therefore, our comments are heavily monitored 24/7 by Remnant moderators around the country.  They have been instructed to remove demeaning, hostile, needlessly combative, racist, Christophobic comments, and streams not related to the storyline. Multiple comments from one person under a story are also discouraged. Capitalized sentences or comments will be removed (Internet shouting).
The Remnant comments sections are not designed for frequent personal blogging, on-going debates or theological or other disputes between commenters. Please understand that we pay our writers to defend The Remnant’s editorial positions. We thus acknowledge no moral obligation whatsoever to allow anyone and everyone to try to undermine our editorial policy and create a general nuisance on our website.  Therefore, Remnant moderators reserve the right to edit or remove comments, and comments do not necessarily represent the views of The Remnant.
back to top
Last modified on Thursday, February 24, 2022
Tweet
More in this category: « The Indifferent Games Archbishop Viganò Addresses Locked Down Australia »