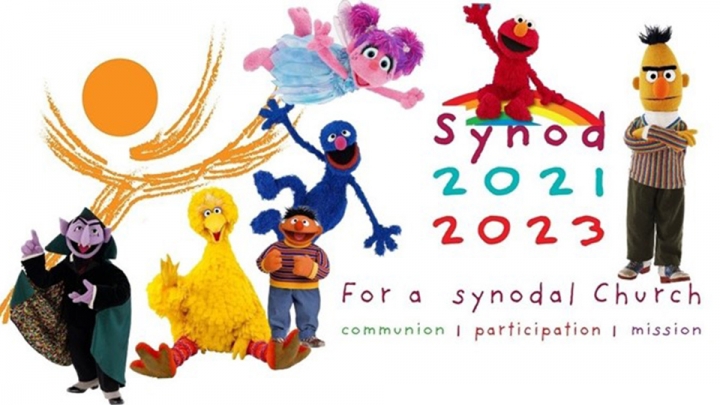 If you haven’t heard about the Synod on Synodality yet, I apologize in advance for ruining your day. The Vatican is currently planning for a synod in 2023 “for a synodal church.” As exemplified in this parody of the original logo, many people have said the whole thing feels more like Sesame Street than a Catholic council.

According to the preparatory document, “This journey, which follows in the wake of the Church’s ‘renewal’ proposed by the Second Vatican Council, is both a gift and a task: by journeying together and reflecting together on the journey that has been made, the Church will be able to learn through Her experience which processes can help Her to live communion, to achieve participation, to open Herself to mission.” Whatever that means.

Just like Vatican 2, nobody really knows why this synod is needed.

Just like Vatican 2, nobody really knows why this synod is needed. Does the Holy Father want to figure out how to correct the roughly 70% of professing Catholics who don’t believe in the dogma of real presence? Does he want to root out the Freemasons and Communists who have infiltrated the Church? Does he want to fight the Modernist revolution which has scandalized countless souls? Does he want to make reparation for the abomination of bringing Pachamama into the Vatican? How about reinstituting the Mass of All Time as the only Mass allowed in Roman Catholic parishes?

Sorry for all that negativity, I guess Oscar the Trad Grouch stole the keyboard for a second. The Synod on Synodality is going to be great; we’re all going to hold hands and sing songs as we journey together down Sesame Street! Yes, even people of other denominations and religions are coming with us. We know how to put the “ecumenical” in ecumenical council!

Oscar the Trad Grouch has a few objections to the synod. “Didn’t St. Paul say to avoid the heretic after the first and second admonition? Why, then, would we want to give heretics a voice in preparing the future of the Church? Shouldn’t we be seeking to convert these people, rather than listening to their heretical opinions?”

The Synod on Synodality is going to be great; we’re all going to hold hands and sing songs as we journey together down Sesame Street!

“Elmo doesn’t know who St. Paul is,” Elmo said, “but Pope St. Paul VI (maybe the same guy?) once said ‘The Church respects and esteems these non Christian religions because they are the living expression of the soul of vast groups of people.’ Therefore, it’s okay to have Protestants and even other religions at the synod. Plus, even Jesus ate with sinners.”

Oscar responded with a quote from St. Pius X, that “Whilst Jesus was kind to sinners and to those who went astray, He did not respect their false ideas, however sincere they might have appeared. He loved them all, but He instructed them in order to convert them and save them.” “So we can’t be in communion with them or invite them to synods until they repent,” Oscar tells Elmo. “It’s not Christlike to let people stay in their sins to avoid offending them, and we risk letting them lead others astray.”

“Elmo is confused,” Elmo replied. “Pope Francis said that ‘The good Lord will save everyone,’ and that includes non-Catholics. If everyone is going to Heaven, why would we need to evangelize or try to convert people?”

This is what’s happening across the board: nobody’s having meetings, and where there are meetings, nobody is showing up.

“WHAT?!?!?!” Elmo screamed. “Elmo cannot believe what he is hearing! Pope Francis can never be wrong about anything, because he is infallible at all times! Elmo is banning Oscar the Trad Grouch from the Sesame Street Synod. You claim to be Catholic, but you’re really a Protestant!”

Oscar tried to respond “But didn’t you say it was okay for Protestants to be at the Synod?” but it was no use, as Elmo had already run away in tears.

This satirical dialogue shows why I believe it is pointless for traditionalists to go to the synodal meetings and try to make the synod tradition-friendly. The vast majority of the bishops wrote very conservative schema to prepare for Vatican 2, but anything that did not reek of Modernism was thrown in the trash. Why should we expect anything different now? At least at the beginning of the council, most bishops were doctrinally conservative. Now, I can count the number of bishops I trust on one hand, and they’ve all gotten in trouble with Rome because of it.

My local parishes are quite tradition-friendly, and as a result none of them have had any sort of synodal meetings. I suspect that this is what’s happening across the board: nobody’s having meetings, and where there are meetings, nobody is showing up. Perhaps a few victories could be won at the parish level, and so I am more than willing to hear from those trads who think we should attend. Be that as it may, this article suffices to prove my point: if you disagree with the heads of the Sesame Street Synod, don’t be surprised when they label you as Oscar the Trad Grouch. To close, I wrote a song for the synod, revised from the Sesame Street theme.

Synodal Days,
Sweeping the trads away
On my way to kiss Pachamama’s feet
Can you tell me how to get
How to get to Synodality Street?

[Comment Guidelines - Click to view]
The Remnant values the comments and input of our visitors. It’s no secret, however, that trolls exist, and trolls can do a lot of damage to a brand. Therefore, our comments are heavily monitored 24/7 by Remnant moderators around the country.  They have been instructed to remove demeaning, hostile, needlessly combative, racist, Christophobic comments, and streams not related to the storyline. Multiple comments from one person under a story are also discouraged. Capitalized sentences or comments will be removed (Internet shouting).
The Remnant comments sections are not designed for frequent personal blogging, on-going debates or theological or other disputes between commenters. Please understand that we pay our writers to defend The Remnant’s editorial positions. We thus acknowledge no moral obligation whatsoever to allow anyone and everyone to try to undermine our editorial policy and create a general nuisance on our website.  Therefore, Remnant moderators reserve the right to edit or remove comments, and comments do not necessarily represent the views of The Remnant.
Last modified on Monday, January 31, 2022