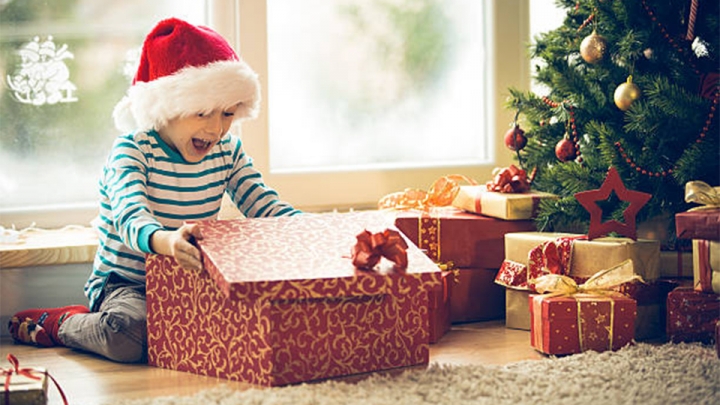 IT IS 1987 in southern Louisiana. Late December. Christmas Eve, in fact. I am gussied up in what I am told are “slacks,” and I am also wearing a shirt with a strange appendage known as a “collar.” The oeuvre is completed by a burgundy clip-on tie. And the temperature is below sixty degrees, so I will have to wear a jacket when we go out. Because it’s already dark, and my family and I are on our way to Midnight Mass.

The damp Louisiana air is heavy with a wintry aroma of pine needles and distant chimney smoke. The sky is dark but the road to the church is lantern-lit with the headlights of all the cars. It’s like a Mardi Gras of Hondas and Fords, pulling one by one into the church parking lot. We have to park way in the corner, near the magnolia tree. My shoes have hard soles and they make a smart, unfamiliar sound as we walk toward the big front doors, where all the other people are also going in.

Inside the church the mood is hushed. Holy water, genuflect, sign of the cross—at ten years old this is much deeper than just second nature. We are south Louisiana Catholics. Even oddballs who don’t pull for LSU are in the south Louisiana Catholic group. It’s who we are in the marrow of our bones, and way beneath that, too, in our hearts and souls.

You might think that it would be hard for a ten-year-old boy to stay up for Midnight Mass. But you’d be wrong. I am aflutter with anticipation, because I have a pretty strong suspicion that in just a few hours I will be unwrapping a spanking new Voltron set, in a box the size of a Sidewinder missile case.

The pews are packed and the ushers are asking gentlemen to give up their seats for old ladies. We take up a position along the wall in the back and wait. I read through the bulletin and the missalette. The back of the bulletin has advertisements for plumbers and real estate agents. And there’s one for the auto body shop my friend’s dad runs. In the missalette are readings from the Bible, the stories that all mean that God loves you and so you’d better straighten up and fly right.

You might think that it would be hard for a ten-year-old boy to stay up for Midnight Mass. But you’d be wrong. I am aflutter with anticipation, because I have a pretty strong suspicion that in just a few hours I will be unwrapping a spanking new Voltron set, in a box the size of a Sidewinder missile case. This is what I really, really want this year. I have watched so many Voltron cartoons that the images are burned into my retinas. What could possibly be better than a robot made of smaller robot lions assembled into one invincible metal machine? Totally awesome. And it is at the top of my list.

This article appears in the Christmas issue of The Remnant Newspaper.
Don't miss the rest -- SUBSCRIBE TODAY! 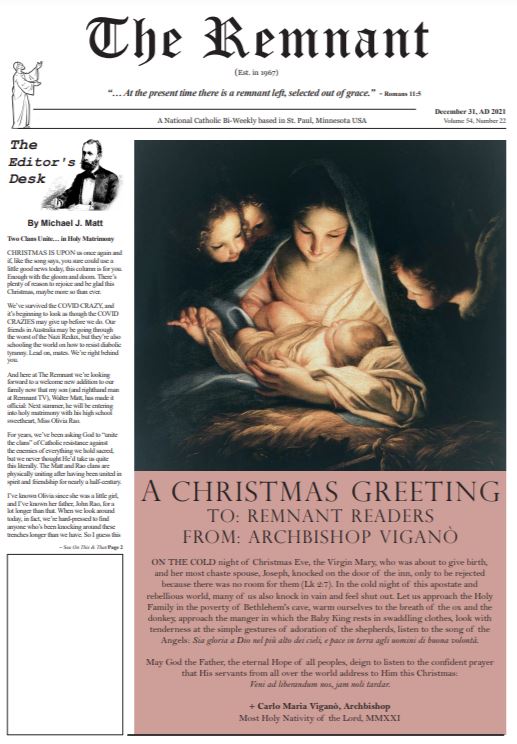 I asked Santa myself for a Voltron, so I know the comms went through. He had come to my Uncle Lance’s house a few weeks ago, when Uncle Lance wasn’t there. We all went to see Santa at Uncle Lance’s and tell him what we wanted and get some crummy peppermint sticks for our trouble. When it came my turn, I sat on Santa’s lap and told him in no uncertain terms that I wanted the Voltron, the giant one, the one advertised in commercials during the Voltron show. I was positive Santa knew just what I meant.

Besides, beneath the big, cottony beard and the scraggly, bushy eyebrows, Santa’s visage bore a striking resemblance to that of old Uncle Lance. Which made it a lock. Us and Santa must be kin. (I wonder if Uncle Lance knows?) So if justice doesn’t do the trick then nepotism surely will. Voltron, I thought with glee, is as good as mine.

Plus, we’d done all the other Christmas things, so any objective Santa should be able to see that I had earned such a gnarly (in 1987 my brother and I loved that word) toy.

This was before Antifa, so there were no hooligans in ski masks committing arson or crowbarring Copeland’s Christmas decorations.

We’d gone to see the Christmas lights on Al Copeland’s house, for example. Copeland owned Popeyes Fried Chicken and had a boat racing hobby on the side. He was rich as Croesus, a New Orleans boy made good. Come Christmas, he would string up beaucoup lights around his gigantic property and folks like us would drive around the neighborhood and ooh and aah.

(This was before Antifa, so there were no hooligans in ski masks committing arson or crowbarring Copeland’s Christmas decorations. In New Orleans, “rich” and “poor” are temporary karmic markers, not absolute states. There was never much class envy in southern Louisiana. When the levees break, we’re all doomed anyway. Funny how happy fatalism can make you. Laissez les bon temps rouler.)

And we’d done our Advent calendar, opening the little windows to set the scene for the coming of the big day. We’d made construction paper chains, red and green, and cut a link each morning, watching the chain shorten as our excitement built. We’d helped my grandfather flock his tree. (In Louisiana, if you want a snow-covered Christmas evergreen, then you’re going to have to buy the snow in plastic foam-form at Ace Hardware.) We’d hung ornaments on that tree and on our own at home, baubles and sentimental knick-knacks, many of them from before I was born.

Come to think of it, I’m not quite sure whether it was the fatalism or the Christianity that made us happier back then.

My mother always hung the ornaments I and my brother had made in the best place. Those ornaments were laminated scrawl from a kindergarten class, and the hook was a bent paperclip. If you looked real close, you might be able to tell whether we had meant to draw a Santa hat or a spaceship. Not exactly a Faberge egg, but to my mother those things were solid gold. I hope my old Ma goes straight to Heaven for the things like that that she did.

And we’d walked around the French Quarter and gone shopping at Jax Brewery, white people and black people milling around in one another’s company as though—if you can believe it—we weren’t all destined to slit each other’s throats in a race war. The black folks were reading the same Bible we learned during Mass readings, and if our interpretation of the book was the same as theirs then we both knew that God wasn’t too impressed with any of us. So we’d best pardon our brother and try to live in peace, lest we get what we had coming.

Come to think of it, I’m not quite sure whether it was the fatalism or the Christianity that made us happier back then. New Orleans had a lot of both, back in the old century, when things were a lot more complicated, and also a lot simpler in the same measure. We didn’t hate each other. We’d had more than enough of that and we were glad to be through.

I always thought Louisiana was my home, but singing “Adeste Fideles” I got a strange feeling that I had another home besides that one.

So there I was at Midnight Mass, in a packed, quiet church, ready as ready got for Christmas to come, with its Voltron and other sundries under the fake-snow tree and stuffed in the red felt stocking with my name written on it by my Momma. The New Orleans Saints had even won more than three games that year, so the stars were definitely aligned. Things were looking good. I was practically guaranteed to get just what I wanted in the morning.

And then the singing started. The Christmas carols. Several hundred people belting out “Adeste Fideles” and filling the church with its refrains. The joyful and faithful and triumphant—danged if that wasn’t us. And it had nothing at all to do with Voltron, I realized with a twinge. Jesus was given to us and somehow everything was going to be all right. Not that I knew much of suffering then. That was to come later for most of us, when the world turned upside down. But in that church the music lifted us up out of ourselves, to a place where there wasn’t any Louisiana, only us and God. I always thought Louisiana was my home, but singing “Adeste Fideles” I got a strange feeling that I had another home besides that one.

Because I was singing, too. Singing like a fool, the notes were so fat and the folks around were singing them so loudly, too. I noticed my face was wet. Being joyful and faithful and triumphant was probably what did it.

I looked furtively around and noticed others with wet faces, too. The priest came in and the Mass was said and the Host was elevated and we all knelt and God was there with us, a baby on straw and a man on a cross and a savior in Heaven, our gift.

Crying is a serious liability when you’re ten. There would be repercussions on the playground when Catholic school let back in in the new year if word got out that Morgan was blubbering at Midnight Mass. I was put in the awkward position of trying inconspicuously to dry my eyes with the sleeve of a jacket I wore probably three times a year. And if my brother happened to glance over and see me I would have no choice but to slug him on the shoulder, Mass or no.

But the singing made it not matter, really. I looked furtively around and noticed others with wet faces, too. The priest came in and the Mass was said and the Host was elevated and we all knelt and God was there with us, a baby on straw and a man on a cross and a savior in Heaven, our gift. Merry Christmas, the priest said. Merry Christmas, we just about shouted back at him. Joy to the world. And we meant it.

Thank God for that. Thank God for a New Orleans Christmas in what is now a lost world. There were hard times coming, and I think I am not the only one now who looks back thirty-five years into the past and gives thanks for those damp Decembers in southern Louisiana. The memory of those happier times, and the Savior Who will win us incomparable joy in the end, are with me still.

I got the Voltron, by the way. But I can’t remember what happened to it.

[Comment Guidelines - Click to view]
The Remnant values the comments and input of our visitors. It’s no secret, however, that trolls exist, and trolls can do a lot of damage to a brand. Therefore, our comments are heavily monitored 24/7 by Remnant moderators around the country.  They have been instructed to remove demeaning, hostile, needlessly combative, racist, Christophobic comments, and streams not related to the storyline. Multiple comments from one person under a story are also discouraged. Capitalized sentences or comments will be removed (Internet shouting).
The Remnant comments sections are not designed for frequent personal blogging, on-going debates or theological or other disputes between commenters. Please understand that we pay our writers to defend The Remnant’s editorial positions. We thus acknowledge no moral obligation whatsoever to allow anyone and everyone to try to undermine our editorial policy and create a general nuisance on our website.  Therefore, Remnant moderators reserve the right to edit or remove comments, and comments do not necessarily represent the views of The Remnant.
Last modified on Sunday, December 26, 2021