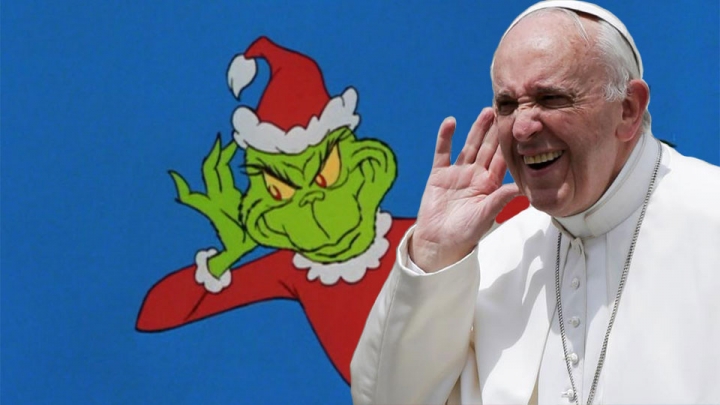 Years ago, I had a priest friend who rose through the clerical ranks of his diocese, to become rector of the Cathedral. He was favored by his bishop, and rightly so, for his priestly zeal and competence. But then, along came a pharaoh who knew not Joseph, and the next bishop despised this priest, because he had been favored by his predecessor. And so, he bided his time, until just the right moment, to inflict pain upon the innocent priest. On Good Friday, precisely at 3:00 pm, the bishop sent an email to the priest, notifying him he would be removed from his position as rector of the Cathedral, immediately after Easter Sunday.

Timing matters, and the timing of this email was not lost on my friend. Imagine the darkness in the soul of his bishop, who chose the hour of the Crucifixion of Christ to crucify an innocent priest—by email!

Speaking of timing, the most recent outrage from Rome demonstrates that timing matters—to hurt others.

It is certainly no coincidence that the new Vatican guidelines that dramatically restrict the Trad Mass and Sacraments were released so close to Christmas.

Imagine the darkness in the soul of Jorge Bergoglio, who clearly derives pleasure from the pain of others.

First, note that the Vatican document implementing draconian restrictions upon the traditional Mass and Sacraments was released on the day following the 85th birthday of Bergoglio. One cannot help but think of the wicked Herod Antipas, on whose birthday the girl Salome danced sensually before the King. Such was his delight that Herod promised her anything she should ask for, which was the head of John the Baptist. One imagines that at Bergoglio’s birthday party, Archbishop Roche, Prefect of the Congregation for Divine Worship and Discipline of the Sacraments, danced before Bergoglio in his finest magenta cassock. So delighted was Jorge that he granted him his earnest desire: the heads of traditional Catholics.

If you aren't subscribed to The Remnant Newspaper, you're missing Fr. Celatus' bombshell articles in EVERY ISSUE 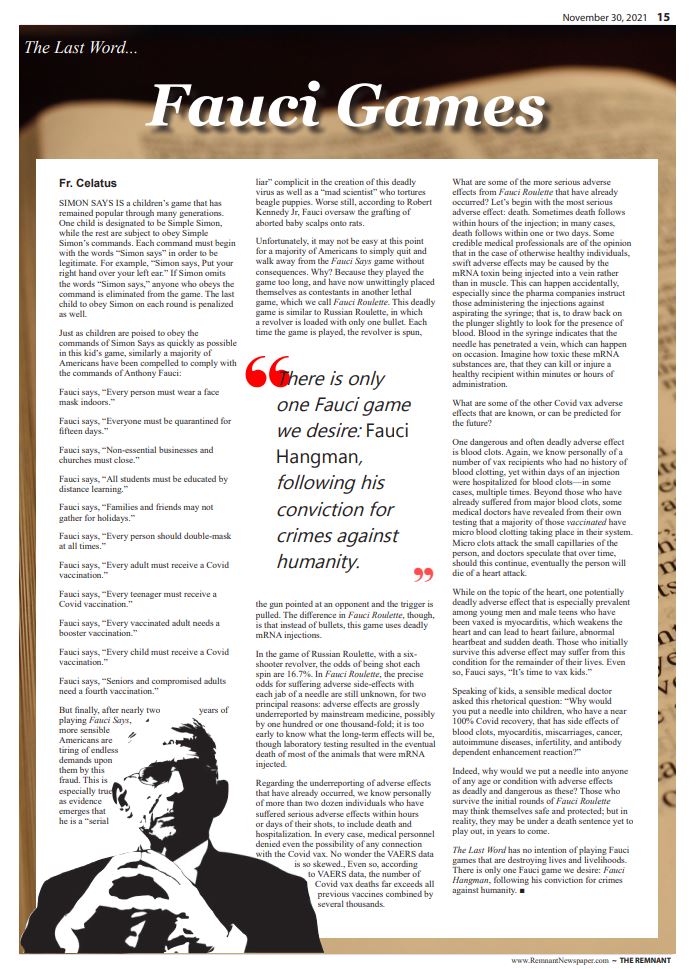 But even more significant than the birthday of Bergoglio, when it comes to timing, is the birthday of our Savior. It is certainly no coincidence that the new Vatican guidelines that dramatically restrict the Trad Mass and Sacraments were released so close to Christmas. If the restrictions enumerated in this document were to be implemented immediately, as Rome intends, it would cancel out countless Christmas Masses worldwide that are already scheduled for the faithful. It would truly be the Grinch who stole Christmas.

The Last Word is not the only one who has noticed and commented upon this proximity to Christmas. Several secular and religious media headlines have described the wretched restrictions as a Christmas Bomb, or a Christmas Diss, or Coal in Stockings, or by reference to the Grinch Who Stole Christmas. By far the most appropriate association between this apostolic act and Christmas is personified by the Grinch.

Our assessment of Jorge Bergoglio as a diabolical narcissist is not based solely upon this most recent instance of wreaking havoc and hurting others, just in time for Christmas.

How the Grinch Stole Christmas is a Dr. Seuss children’s story about a mean-spirited, grouchy green creature who hated Christmas. The reason for his hatred is that he had a heart “two sizes too small.” He is particularly perturbed by the annual Christmas merriment in Whoville, the sounds of which rise up to his solitary existence in a cave on Mount Crumpit. One year he decides to end Christmas, by stealing all the trappings of Christmas, such as presents and stockings and trees on Christmas Eve. Expecting the Whos to be miserable on Christmas Day, instead they sang Christmas songs, as “Christmas means a bit more.” 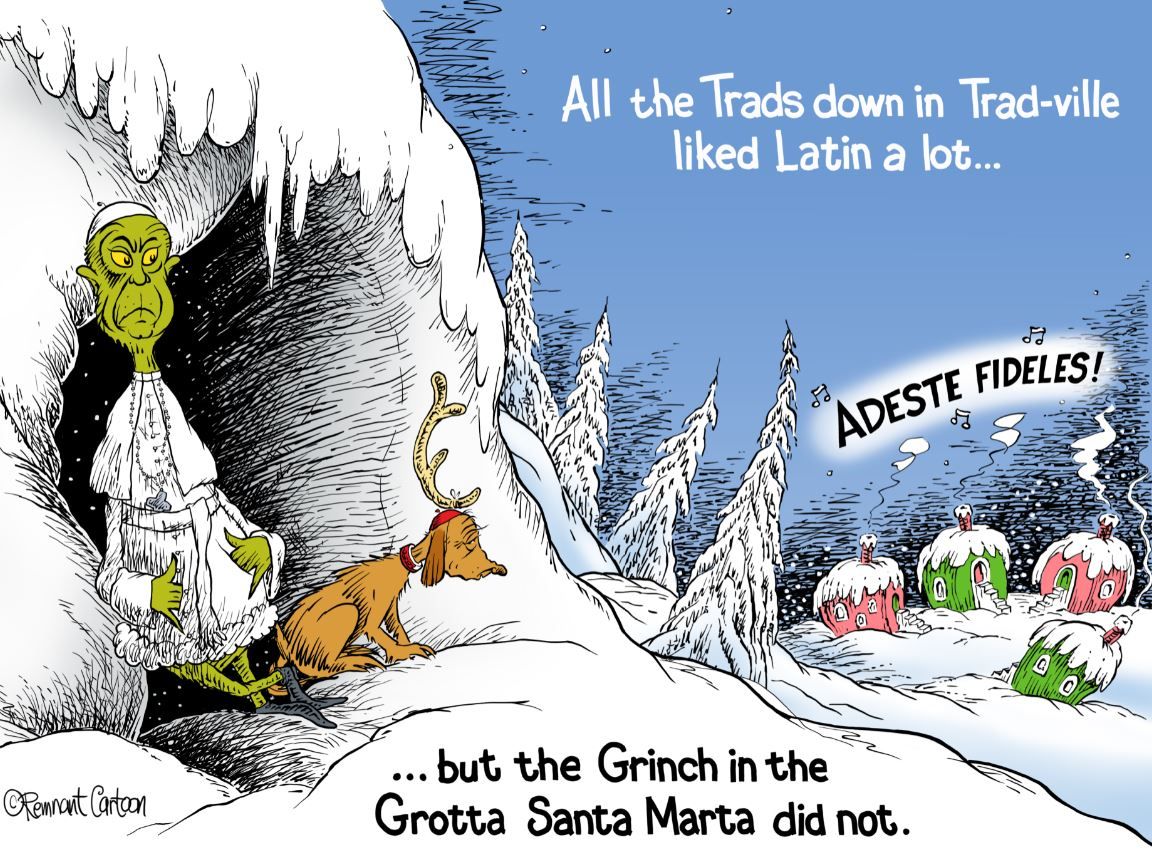 The fictional figure of the Grinch is a narcissist, lacking in love, loathsome to self, with no empathy for others. While in the story the Grinch’s heart grows three sizes, in reality, narcissism is hard to overcome.

We believe that the nonfictional figure of Jorge Bergoglio is also a narcissist, lacking in love, loathsome to self, with no empathy for others. Even worse, he would seem to be a diabolical narcissist (hat tip to Ann Barnhardt), who has so purged himself of supernatural love that he seeks to destroy innocence and love in others. We call it diabolical because the behavior mimics that of the demons, who are devoid of love, loathing themselves for what they have become, yet choosing to destroy others rather than repent.

Consider his condescending words to those who work in the Vatican or to priests who labor in the vineyard. Remember that this man restored a predator to power, who destroyed the innocence of victims.

Our assessment of Jorge Bergoglio as a diabolical narcissist is not based solely upon this most recent instance of wreaking havoc and hurting others, just in time for Christmas. In fact, this Christmas Bomb from Bergoglio was fully predictable and anticipated by many. If fits his character and his characteristic behavior, now as Bishop of Rome and before that, as Archbishop of Buenos Aires. Recall the scorn with which he spoke of the religious nuns who gave him a spiritual bouquet of rosaries. Eyewitnesses testify to his frequent outbursts in the Vatican lunchroom, which must be evacuated due to his profanities. How about the traditional religious communities that were thriving, only to be destroyed by Jorge’s treachery? Consider his condescending words to those who work in the Vatican or to priests who labor in the vineyard. Remember that this man restored a predator to power, who destroyed the innocence of victims.

Among his restrictions for Chicago, Cardinal Cupich prohibits the celebration of the traditional Mass on the first Sunday of every month, Christmas, the Triduum, Easter Sunday, and Pentecost Sunday https://t.co/6MyUWs9x16 @cnalive

Now, one last word on the topic of timing. Just days prior to the release of new restrictions on the traditional Mass and Sacraments, a modification was made to a Church canon that provides penalties for those who publicly oppose acts of the Apostolic See or the Bishop of Rome. Previously, the canon only applied to those who govern. Now, Canon 1373 applies to anyone: A person who publicly incites hatred or animosity against the Apostolic See or the Ordinary because of some act of ecclesiastical office or duty, or who provokes disobedience against them, is to be punished by interdict or other just penalties.

The best way to overcome a bully—including a green bellied bully—is to stand up to him and call his bluff. And so, we say to Francis of Rome and Archbishop Roche: We publicly oppose you and we call upon others to have hatred and animosity toward your modernist acts and agenda.

Well, the Last Word believes that the best way to overcome a bully—including a green bellied bully—is to stand up to him and call his bluff. And so, we say to Francis of Rome and Archbishop Roche: We publicly oppose you and we call upon others to have hatred and animosity toward your modernist acts and agenda. We intend to disobey you and we urge other priests and all the faithful to disobey you as well. We dare you to punish us by an interdict or another unjust penalty, to include excommunication. You can send the decree of excommunication in care of the Remnant. Go ahead, make my Christmas, you Grinch!

[Comment Guidelines - Click to view]
The Remnant values the comments and input of our visitors. It’s no secret, however, that trolls exist, and trolls can do a lot of damage to a brand. Therefore, our comments are heavily monitored 24/7 by Remnant moderators around the country.  They have been instructed to remove demeaning, hostile, needlessly combative, racist, Christophobic comments, and streams not related to the storyline. Multiple comments from one person under a story are also discouraged. Capitalized sentences or comments will be removed (Internet shouting).
The Remnant comments sections are not designed for frequent personal blogging, on-going debates or theological or other disputes between commenters. Please understand that we pay our writers to defend The Remnant’s editorial positions. We thus acknowledge no moral obligation whatsoever to allow anyone and everyone to try to undermine our editorial policy and create a general nuisance on our website.  Therefore, Remnant moderators reserve the right to edit or remove comments, and comments do not necessarily represent the views of The Remnant.
back to top
Last modified on Monday, December 27, 2021
Tweet
More in this category: « Michael Matt calls for ecumenical coalition to resist Francis The Christmas Pause »