Why Suffer for Sacred Tradition? 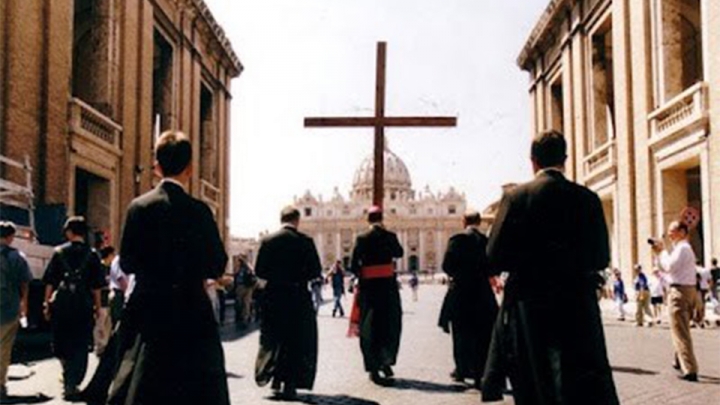 As a Traditional Catholic, I am often asked why I go to all the work to keep being traditional. Why do I drive out of town for the Traditional Mass when the Novus Ordo is much closer? Why do I believe that Catholicism is the only true religion, outside of which nobody will be saved? Why do I fast from meat on Fridays? Why do I reject the Second Vatican Council? Why am I so rigid? Why don’t I just get with the times?

Getting with the times would be such a lighter cross. I have liberal friends and family members who love Pope Francis, as well as pro-choice President Joe Biden, who is definitely the most devout Catholic the world will ever see! I would be so lost without the friendly reminders that if you disagree with the Pope, then you ain’t Catholic. That shouldn’t worry me at all, though, because Francis still says that “The good Lord will save everyone.” I could be much happier if I’d just agree with him.

Traditionalists must remember that the essence of Catholic Tradition is deeper than liturgical nostalgia; it is the faith itself.

If I were to obey Traditionis Custodes and go to the Novus Ordo, I wouldn’t have to seek out sacraments from canonically irregular priests. I would save money on Latin-English missals, since the priest says the Mass to me in English. There’s no need to be rigid and reverent when we’re just having a communal meal with friends. It’s not like this is the Sacrifice of Calvary or anything, right?

As tempting as it can be for me to just shut up, I know that there’s a reason why I resist.

Watch the Latest from RTV -  THE ONE WORLD RELIGION: Francis and the Abrahamic Family House

If the great St. Athanasius had just let his fellow bishops push the Arian heresy, they would’ve never sent him into exile, but God would have done so. Tradition told him that Jesus Christ is divine, even if some in the hierarchy said otherwise. This is why he wrote “Even if Catholics faithful to Tradition are reduced to a handful, they are the ones who are the true Church of Jesus Christ.”

Therefore, we suffer for sacred tradition because our souls would suffer eternally without it.

With this in mind, traditionalists must remember that the essence of Catholic Tradition is deeper than liturgical nostalgia; it is the faith itself. If the changes in the Conciliar Church do not threaten the Catholic faith, we are wasting our time by resisting them. St. Paul tells us “Therefore, brethren, stand fast; and hold the traditions which you have learned, whether by word, or by our epistle,” (2 Thessalonians 2:14, Douay-Rheims). The Second Council of Nicea gives us the most stern warning that “if anyone rejects any ecclesiastical tradition, whether written or unwritten, let him be anathema.”

Therefore, we suffer for sacred tradition because our souls would suffer eternally without it. It is by tradition that we have received the Catholic Faith, and it is by tradition that we will hand it down to our children. The pope is not above the faith he is charged with transmitting, especially if he fails to transmit it. In the words of the saintly Archbishop Marcel Lefebvre, “No authority, not even the highest in the hierarchy, can force us to abandon or diminish our Catholic Faith, so clearly expressed and professed by the Church’s Magisterium for nineteen centuries.”

[Comment Guidelines - Click to view]
The Remnant values the comments and input of our visitors. It’s no secret, however, that trolls exist, and trolls can do a lot of damage to a brand. Therefore, our comments are heavily monitored 24/7 by Remnant moderators around the country.  They have been instructed to remove demeaning, hostile, needlessly combative, racist, Christophobic comments, and streams not related to the storyline. Multiple comments from one person under a story are also discouraged. Capitalized sentences or comments will be removed (Internet shouting).
The Remnant comments sections are not designed for frequent personal blogging, on-going debates or theological or other disputes between commenters. Please understand that we pay our writers to defend The Remnant’s editorial positions. We thus acknowledge no moral obligation whatsoever to allow anyone and everyone to try to undermine our editorial policy and create a general nuisance on our website.  Therefore, Remnant moderators reserve the right to edit or remove comments, and comments do not necessarily represent the views of The Remnant.
back to top
Last modified on Friday, November 19, 2021
Tweet
More in this category: « APPEAL FOR AN ANTI-GLOBALIST ALLIANCE Following the Lord, Noting the Science »