The Synodal Path of Diabolical Disorientation 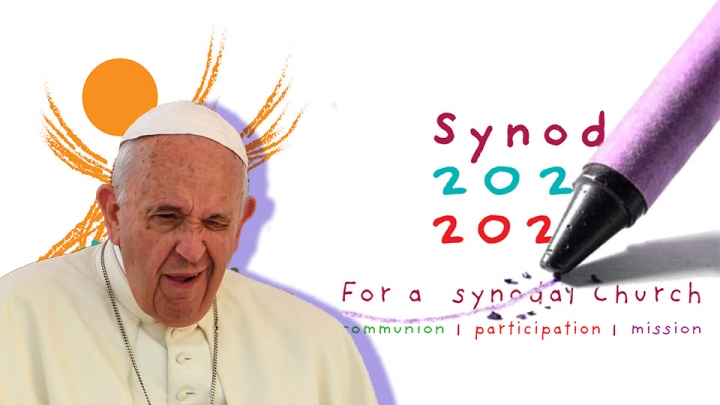 It is easy to dismiss, or at least mock, Francis’s “Synod for a Synodal Church.” Everything about the Synod seems intentionally ridiculous. Truly, it is designed to humiliate the Mystical Body of Christ, with the premise that God got some things right but now we must let sinful men give it a shot.

So the very process of the Synodal path would lead to a different faith because it will be a human faith, even if it has some resemblance to Catholicism.

It would, of course, be bad enough if it were simply a process of reevaluating everything about the Church. Even if the process yielded a church which resembled the Catholic Church during her most glorious years, it would still be sinister because it would be a church created by the consensus of men rather than the authority, wisdom, and love of God. In his The Catechism of the Crisis in the Church, Fr. Matthias Gaudron describes this fundamental fault of the Synod: the process by which personal judgment leads to the supernatural faith being replaced by a purely human faith:

“Faith does not depend on our personal judgment, but on the authority of God who reveals Himself and who can neither deceive nor be deceived. Thus it is necessary to receive everything that God has revealed and not take only that which seems good to us. Therefore someone who makes a choice about the revealed deposit of faith and does not want to accept it as a whole imposes a limit on God, for he lets his reason have the last word. He who acts in this way no longer has a supernatural faith, but only a human faith, however numerous the points on which it may be in accord with supernatural faith.”

So the very process of the Synodal path would lead to a different faith because it will be a human faith, even if it has some resemblance to Catholicism.

Unfortunately it gets worse. Paragraph 17 of the “preparatory document” for the Synod introduces an image for the journey:

“An original scene appears, in its fundamental structure, as the constant of the way in which Jesus reveals himself throughout the Gospel, as he announces the coming of the Kingdom of God. Essentially, three actors (plus one) are involved. The first, of course, is Jesus, the absolute protagonist who takes the initiative, sowing the words and signs of the coming of the Kingdom without ‘showing partiality’ (cf. Acts 10:34).”

The next several paragraphs of the Synod’s preparatory document purport to teach us about the way in which Jesus reveals himself throughout the Gospel. This little introduction intentionally sparks our curiosity — it speaks of “three actors (plus one)” involved in the process . . . who is the “plus one”?

The Synodal path began in hell and leads to hell.

The introduction also mentions that Jesus is the “absolute protagonist” because He “takes the initiative,” not because He is God. In paragraph 18, we learn that Jesus’s work depends in some way on His “constant openness” to the second actor in the scene, the crowd following Him:

“In fact, the work of evangelization and the message of salvation would not be comprehensible without Jesus’ constant openness to the widest possible audience, which the Gospels refer to as the crowd, that is, all the people who follow him along the path, and at times even pursue him in the hope of a sign and a word of salvation: this is the second actor on the scene of Revelation. The proclamation of the Gospel is not addressed only to an enlightened or chosen few. Jesus’ interlocutor is the ‘people’ of ordinary life, the ‘everyone’ of the human condition, whom he puts directly in contact with God’s gift and the call to salvation. In a way that surprises and sometimes scandalizes the witnesses, Jesus accepts as interlocutors all those who emerge from the crowd.”

“The third actor’s entrance on the scene occurs not thanks to a cure or a conversion, but because it coincides with Jesus’ call. The election of the apostles is not the privilege of an exclusive position of power and separation but the grace of an inclusive ministry of blessing and fellowship. . . . Thanks to the gift of the Spirit of the Risen Lord, they are to guard the place of Jesus, without replacing him: not to put filters on his presence, but to make it easy to encounter him.”

Indeed, during sane periods of Church history, Catholics would have been forbidden to participate in such an unholy and dangerous spectacle.

So Jesus, our protagonist, took the initiative to spread the word about the Kingdom of God to the crowd, and the Apostles are there, “not to put filters on his presence, but to make it easy to encounter him.” Just as we do not get any sense that Jesus is the “absolute protagonist” because He is God, this view of the Apostles does not include any sense that they are entrusted to faithfully transmit what Jesus has taught them. This idea that they are “not to put filters on His presence” seems to suggest that the Apostles would violate their mandate if they tried to teach anything.

Thus we have the “three actors,” but we know from paragraph 17 that we still need to meet the mysterious “plus one.” Paragraph 21 tells us about this “extra”:

“Then, there is the ‘extra’ actor, the antagonist, who brings to the scene the diabolical separation of the other three. Faced with the perturbing prospect of the cross, there are disciples who leave and mood-changing crowds. The insidiousness that divides—and, thus, thwarts a common path—manifests itself indifferently in the forms of religious rigor, of moral injunction that presents itself as more demanding than that of Jesus, and of the seduction of a worldly political wisdom that claims to be more effective than a discernment of spirits. In order to escape the deceptions of the ‘fourth actor,’ continuous conversion is necessary.”

It seems odd that anyone would be excluded from the feel-good synodal path but here we understand that the fiendish “antagonist” will not be receiving the official Synod crayons to design a new church. These insidious extras operate with “religious rigor” and “moral injunction.” In other words, they believe and practice the Catholic Faith as it has always been believed and practiced. And for Francis these antagonists are obstacles, who “thwart a common path” because they do not give proper weight to the “discernment of spirits.” As a result, Francis and his collaborators must “escape the deceptions of the fourth actor” through some mysterious process of “continuous conversion.” In short, if you are a faithful Catholic, you are the insidious extra who is not welcome to join the Synodal journey.

Above all else, though, we need to become saints, now.

The Synodal path began in hell and leads to hell, so we should not feel too distraught about not being invited. Indeed, during sane periods of Church history, Catholics would have been forbidden to participate in such an unholy and dangerous spectacle. But we cannot ignore this diabolical disorientation, for it attacks the Mystical Body of Christ: we must pray, perform penance, fight for the truth, and refute the monstrous lies Francis and Satan intend to spread in the name of Catholicism. Above all else, though, we need to become saints, now.

May the Blessed Virgin Mary help us to fight these demons that she will ultimately crush. Queen of the Most Holy Rosary, pray for us!

[Comment Guidelines - Click to view]
The Remnant values the comments and input of our visitors. It’s no secret, however, that trolls exist, and trolls can do a lot of damage to a brand. Therefore, our comments are heavily monitored 24/7 by Remnant moderators around the country.  They have been instructed to remove demeaning, hostile, needlessly combative, racist, Christophobic comments, and streams not related to the storyline. Multiple comments from one person under a story are also discouraged. Capitalized sentences or comments will be removed (Internet shouting).
The Remnant comments sections are not designed for frequent personal blogging, on-going debates or theological or other disputes between commenters. Please understand that we pay our writers to defend The Remnant’s editorial positions. We thus acknowledge no moral obligation whatsoever to allow anyone and everyone to try to undermine our editorial policy and create a general nuisance on our website.  Therefore, Remnant moderators reserve the right to edit or remove comments, and comments do not necessarily represent the views of The Remnant.
back to top
Last modified on Tuesday, November 2, 2021
Tweet

More in this category: « THE STRAWMAN: Do Traditional Catholics Cherry Pick Only Novus Priest Sex Scandals? A Veteran Affair »