What’s the Big Deal with the Pentecost Octave? 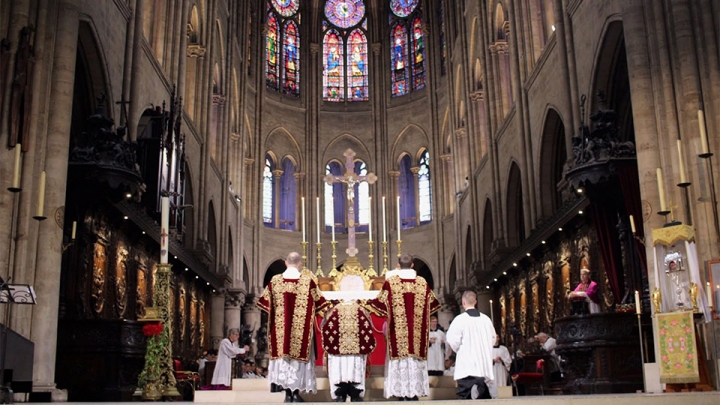 An “octave” is an eight-day period in which the Church—not content to remember some great mystery only on a single day—extends her joyful celebration for the period of a full week, with a culminating remembrance on the eighth or octave day.

The concept of the eighth day is important in Christian theology. The eighth, being one more beyond the seven-day week that represents the order of creation, symbolizes the eternal life reached after passing through this earthly life. In the Jewish reckoning, in which the Sabbath is the seventh day, Sunday—the day of Our Lord’s resurrection from the dead—can be seen as both the first day (the new creation of light) and the eighth day (the gateway to eternity). Running through a week like this—the week of creation that culminates in God’s rest, and beyond it to the day of the resurrection—symbolizes the fullness of the Church’s rejoicing (it is for all time) and the eternal joy of heaven.

The Church Fathers and the medieval theologians also saw in the mathematical structure of music a natural sign: the octave, or eighth note, is, in a way, both the same note as the lower octave (a C is a C), and yet a different note (a lower C is not a higher C), so that we have the sense of both homecoming and making progress. Our earthly pilgrimage toward heaven is bringing us to the perfection and joy for which we were created in the beginning. Like passing through the notes of a scale to reach the octave, we celebrate the feast day by day to arrive at the place from which we began, in a “virtuous circle.” Life is not meaningless repetition or equally meaningless variety, but ordered steps with directionality.

The gift of the Holy Ghost is not just for one day, but for every day of the Church’s history, and for the eighth day of eternity.

The idea behind a liturgical octave is that certain feasts are so immense, so profound, so consequential, that we cannot give them only one day, as if checking off a box (“been there, done that”). Rather, just as small bodies give off no gravitational field but very large bodies do (that’s why people don’t spontaneously attract objects but the earth attracts everyone on it and holds them to its surface), so the greatest feasts—and, above all, Christmas, Easter, Pentecost—throw a certain “field” around themselves, pulling in time beforehand (the O Antiphons, Holy Week, the novena of Ascension and the Pentecost Vigil) and extending outward to an afterglow of seven more days and into a season.

Christmas, Easter, and Pentecost are the most ancient octaves, but over the course of time the Roman rite acquired quite a few octaves, owing to a healthy instinct for maximalism that has always characterized the development of liturgical worship. In 1955, Pope Pius XII did away with fifteen of the eighteen octaves (!), leaving only the three mentioned—a move that lovers of the Roman tradition cannot help but view as a bloody butchery. Among other things, it stripped the Church’s calendar of the much-loved and highly fitting octaves of Epiphany, Corpus Christi, the Sacred Heart, the Ascension, the Immaculate Conception, and the Assumption, which suffused the year with Christological and Mariological warmth. The post-Vatican II liturgical reform added one more massacred body to the heap by abolishing the ancient octave of Pentecost itself in the new calendar of 1969. Unlike Pius XII’s move, which passed itself off as a return to a simpler ancient calendar, this new step was patently absurd, since it violated the records of antiquity as well as the unanimous understanding of the preeminence of Pentecost, which was, for a long time, considered superior even to the Christmas feast.

The earliest extant record of the Pentecost octave is from the late sixth century—the same century in which we find the first indication of the observance of an octave day for Christmas, January 1, the feast of the Circumcision of Our Lord—but a prolonged celebration of Pentecost is probably much older, considering its universal presence in East and West. Something done by both the Latins and the Greeks unanimously and from the earliest records is likely to belong to the apostolic period or shortly thereafter. (One might add, in a spirit of interreligious dialogue, that even observant Jews celebrate Pentecost, Shavuot or the “Feast of Weeks,” for two days instead of just one, which may partly explain the special importance that was always given to Pentecost Monday, still a civic holiday in some European countries.)

The traditional Introit for Pentecost Tuesday explodes with joy as the Church welcomes the supreme gift, the Holy Ghost: “Receive the most sweet gift which shall be your glory, alleluia: giving thanks to God, alleluia, who hath called you to the heavenly kingdom, alleluia, alleluia, alleluia. V. Attend, O My people, to My law: inclined thine ear to the words of My mouth.” When the priest or the schola repeats this antiphon, they will fittingly end up saying or singing the word “alleluia” ten times, pointing to the number of Commandments on the two tablets brought down from the holy mountain. The psalm verse (“Attend, O My people, to My Law”) recalls that the original meaning of Pentecost among the Jews was to recall with gratitude the giving of the Law, which, in the age of Christ, becomes the writing of the Law upon the fleshy tablets of our hearts—in other words, the very essence of the Christian life and the whole point of it. In the “network of mysteries” recollected and re-presented in the sacred liturgy, the descent of the Holy Ghost at Pentecost stands on an equal level with the Nativity of the Savior we celebrate on December 25 and with the commemoration of His Passion on Good Friday, for the birth and death of the Savior would have been of no benefit to us had He not poured out upon us the Spirit of adoption, making us “Sons in the son,” mystically united to His Passion, death, resurrection, and ascension.

No wonder the Church cries out in the Preface of Pentecost, used every day of the octave from Pentecost Sunday to Trinity Sunday:

It is truly meet and just, right and availing unto salvation, that we should at all times and in all places give thanks unto Thee, O holy Lord, Father almighty and everlasting God; through Christ our Lord. Who ascending above all the heavens, and sitting at Thy right hand, on this day sent forth the Holy Ghost, as He had promised, on the children of adoption. Wherefore does the whole world rejoice with exceeding great joy; the hosts above and also the angelic powers join in singing the hymn to Thy glory, saying without ceasing: Sanctus, sanctus, sanctus…

“The whole world rejoices with exceeding great joy!” Perhaps a Christian world did so, in the High Middle Ages; but in darker times such as ours, at least the Church on earth should be rejoicing for the same span she gives to Christmas and Easter, and should follow up that octave with weeks of basking in the light of the mystery—a “Pentecosttide” that corresponds to Christmastide and Eastertide. Surely enough, that is just what the traditional calendar always did and still does: after Pentecost, an octave of Pentecost; and after Trinity Sunday, the successive Sundays are marked as “Sundays after Pentecost,” placing the longest span of the year under the wings of the Dove, the mighty rushing wind that drives on the Barque of the Church until the Second Coming of Christ.

The gift of the Holy Ghost is not just for one day, but for every day of the Church’s history, and for the eighth day of eternity. How we structure time should reflect our awareness of the magnitude of this gift and of the danger of losing it by sin. For if the Church cannot be completely derailed, individual laymen, religious, and clerics by no means share the same immunity to defection. The indefectibility of the Church means only that somewhere the Faith will remain intact and the sacraments will be given; it does not mean that you or I or any member, no matter how lowly or lofty, will keep the Faith and receive the sacraments unto salvation. This is why we plead year after year for the coming of the Holy Ghost into our heart and mind, into our family, parish, nation, world. Sine tuo numine / nihil est in homine / Nihil est innoxium. “Without Thy numinosity / Nothing is in man / Nothing is harmless” (Sequence).

The traditional Latin Mass retains this octave of Pentecost and the Time after Pentecost. Let us rejoice that this ancient, beautiful, and fitting custom still belongs to us today. In the Novus Ordo, some of the clergy—reminiscent of the Jews whom St. Paul says are jealous about the benefits accruing to the Gentiles from the coming of Christ—are longing to possess such riches and choose to celebrate Votive Masses of the Holy Spirit throughout the week after Pentecost, building as much of an octave as the rubrics will allow. This, however, as we all know, is a stop-gap measure, rather like the baptism of John that needed to give way to the baptism of Jesus. The solution to a pneumatologically-challenged liturgy is the wholesale restoration of the Roman rite in its authentic form. For this, let us beseech the Lord and Giver of Life, who can restore the ruined and revive the dying.

[Comment Guidelines - Click to view]
The Remnant values the comments and input of our visitors. It’s no secret, however, that trolls exist, and trolls can do a lot of damage to a brand. Therefore, our comments are heavily monitored 24/7 by Remnant moderators around the country.  They have been instructed to remove demeaning, hostile, needlessly combative, racist, Christophobic comments, and streams not related to the storyline. Multiple comments from one person under a story are also discouraged. Capitalized sentences or comments will be removed (Internet shouting).
The Remnant comments sections are not designed for frequent personal blogging, on-going debates or theological or other disputes between commenters. Please understand that we pay our writers to defend The Remnant’s editorial positions. We thus acknowledge no moral obligation whatsoever to allow anyone and everyone to try to undermine our editorial policy and create a general nuisance on our website.  Therefore, Remnant moderators reserve the right to edit or remove comments, and comments do not necessarily represent the views of The Remnant.
back to top
Last modified on Wednesday, May 26, 2021
Tweet