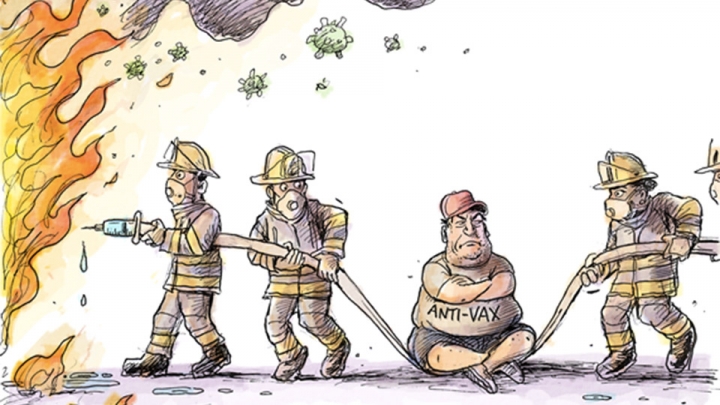 The popular astrophysicist Neil deGrasse Tyson recently Tweeted a cartoon intending to summarize the great crisis we now face in America. In it we see four firemen in Covid-masks attempting to put out a fire. But an obese white male in an “anti-vax” t-shirt is sitting on the fire hose, arms crossed, such that only a trickle of fluid flows from the vaccine needle at the end of the hose.

The fat white man wears a plain red hat that might as well say “Make America Great Again” because it is clear — as the intended audience has been conditioned to recognize — that he is precisely the type of slob who wishes we still had President Trump. It figures! People who think that egregious voting irregularities ought to be investigated are probably the same type of people who think that we ought to consider the side-effects of an experimental gene therapy that evidently does not prevent its recipients from catching or spreading Covid-19. As the only unmasked person in the cartoon, we also get a sense of the anti-vaxer’s toxic masculinity and presumptive racism as he scowls at a small fireman of color. One can only imagine that this fat white man has monstrous disregard for the preferred pronouns of the firepeople. 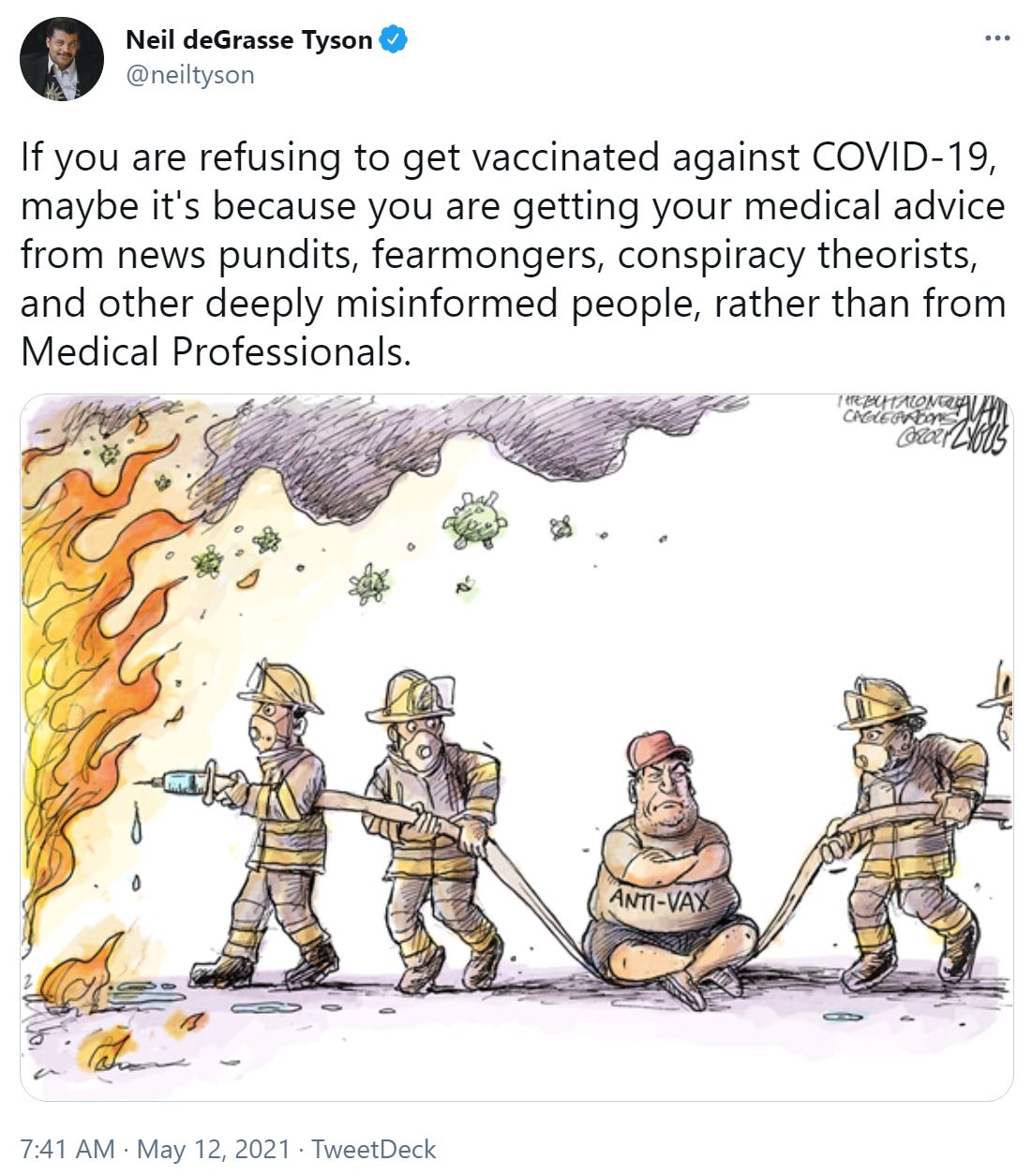 We may criticize the cartoon for its rather idiotic and malicious mischaracterizations of reality, but on a certain level it adequately conveys one of the most important realities facing us today: the fact that anyone who balks at the woke new order will be demonized, demoralized, and ultimately crushed. Beyond that, it offers us several images that help define our current crisis:

Flames. Many people who disagree with each other on almost everything share the sense that the world is on fire. The existence of the cartoon itself illustrates the fact that there is a concerted effort on the part of the arsonists to convince the world that the flames have been fed by traditional belief structures that must now be cut off at the source. Serious Christians, on the other hand, see this conflagration as a predictable result of having turned away from God. The arsonists will continue to wage war with every weapon they have, but we have now entered a phase in which they can simply turn the faithful of the Church of Covid against the infidels. These hellish flames will of course spread as society accelerates away from God, and the opposing sides will blame each other.

Imposters. Like the firemen in the cartoon who wear Covid-masks and wield a vaccine hose, so many people in positions of responsibility have proven to be imposters in the face of our current crisis. Medical professionals push experimental “vaccines” with dubious effectiveness and serious side-effects, and yet they fail to prescribe safe treatments such as Hydroxychloroquine and Ivermectin that have been quite effective for many Covid patients. Governmental officials allow thugs to burn and loot their cities but quickly crack down on those who fail to comply with their arbitrary and nonsensical Covid rules. Cowardly politicians see the greatest threats in their nations’ respective histories but refuse to stand up for what they know to be right. Catholic clerics follow Bergoglio in rejecting Christ while embracing and promoting sin. All of these imposters feed the flames while attempting to retain the appearances of combating the fires. Onlookers who do not have their eyes fixed on timeless Truth must continually adjust their view of reality to make some sense of it all. Over time, this process creates so many imposters that the woke mob will no longer tolerate those who actually perform their responsibilities in an honest manner. In many places, we have already arrived at that point.

Crisis of Authority. In his cartoon Tweet, Professor Tyson makes an appeal to authority:

“If you are refusing to get vaccinated against COVID-19, maybe it's because you are getting your medical advice from news pundits, fearmongers, conspiracy theorists, and other deeply misinformed people, rather than from Medical Professionals.”

This battle of authority extends back to the fall of Satan and his tempting of Eve, but it took a dramatic turn for the worse when the visible authorities of the Church relinquished their moral authority in the wake of Vatican II. Today we find the highest authorities of the Church telling us to follow them in abandoning the Faith. Every inch of authority ceded by the leaders of the Church is seized by the prince of lies. As a result, we no longer need to have much of an imagination to envision how we could arrive at the time foretold by Jesus:

“And you shall be betrayed by your parents and brethren, and kinsmen and friends, and some of you they will put to death. And you shall be hated by all men for my name’s sake” (Luke 21:16-17).

These words should make us cleave to the Truths which the Church has always taught, for this infallible authority will remain even if we can find no living proponent of it. And we have it on the highest authority that if we watch and pray we can persevere through whatever trials await:

“Watch ye, therefore, praying at all times, that you may be accounted worthy to escape all these things that are to come, and to stand before the Son of man” (Luke 21:36).

Remembering Who We Are. The world will of course try to convince us that we are deplorable slobs who selfishly fan the flames engulfing society. Our enemies are always trying to make us forget who we are. As Fr. Raymond argued in his 1954 book, God, A Woman, and the Way, the great problem facing the world, even then, was that so many Christian men and women suffer from this amnesia:

“He has forgotten that he is a man and not a machine, the masterpiece of visible creation and not the product of blind forces, and immortal living in time, an exile with a home in a far country, a breath of God, in a vessel of clay. He has forgotten his own identity and his essence. That is the amnesia which must be cured. It is man’s memory, not man’s mind, that demands the treatment. If he can be made to bring to the surface of his consciousness the true concept of what he is, modern madness ends. The patient cures himself. And the cure lies in correct self-consciousness.”

With the exception of the suggestion that man’s mind does not require treatment, this has become even more true over the past several decades. The builders of the diabolical future (that is already within view) know who they are and what they are doing. And they have every natural reason for their confidence — most Christians have, in the words of St. James, forgotten who they are and what they are called to do:

“Be ye doers of the word and nor hearers only, deceiving your own selves. For if a man be a hearer of the word and not a doer, he shall be compared to a man beholding his own countenance in a glass: for he beheld himself and went his way, and presently forgot what manner of man he was.” (James 1:23-24)

As Fr. Raymond wrote, we can cure the modern madness when we, as the Church Militant, remember who we are.

Emergency Responders. From the lives of the saints we know that certain Christians have responded to desperate situations by exercising heroic virtue. Perhaps we realize that we too could be doing more, and we may even acknowledge that certain circumstances might nudge us to give everything for Christ.

Day by day, many of us are beginning to recognize that we are running out of options. The emergency responders of the woke religion will continue to see us as the source of the flames that threaten their bread and circuses. They will turn their woke weapons against us, forcing us into a corner with only one way out. And, Deo Gratias, that corner happens to be the one that prompts us to give everything to Christ.

Related - TO HELL with GLOBALISM: United We Stand, One Nation, Under God

We are the ones to whom Jesus Christ addressed these words that should fill us with hope and confidence: “Amen, amen I say to you: if you ask the Father anything in My name, He will give it to you. Hitherto you have not asked anything In My name: ask, and you shall receive, that your joy may be full” (John 16:23-24).

Our Lord’s words are still true today, so if there is a failure to obtain what we seek we can surmise that we have not truly been asking as we should. But, if we can truly turn to God, as though our earthly lives and eternal beatitude depended upon it, we can ultimately echo the words of thanksgiving that the Church presents before us in the Mass for Virgin Martyrs:

“Thou hast been my helper. And Thou has delivered me, according to the multitude of the mercy of Thy name, from them that did roar, prepared to devour; out of the hands of them that sought my life, and from the gates of afflictions which compassed me about: from the oppression of the flame which surrounded me, and in the midst of the fire I was not burnt: from the depth of the belly of hell, and from an unclean tongue, and from lying words, from an unjust king, and from a slanderous tongue. My soul shall praise the Lord even to death: because Thou, O Lord our God, deliverest them that wait for Thee, and savest them out of the hands of the nations.” (Ecclesiasticus 51: 3-8, 12)

If we can fight these vile flames with hearts that burn for love of Jesus, we can emerge unburnt, praising God for delivering us from the woke mob that will continue to grow ever closer to its leader, the prince of lies. St. Michael the Archangel, defend us in battle!

[Comment Guidelines - Click to view]
The Remnant values the comments and input of our visitors. It’s no secret, however, that trolls exist, and trolls can do a lot of damage to a brand. Therefore, our comments are heavily monitored 24/7 by Remnant moderators around the country.  They have been instructed to remove demeaning, hostile, needlessly combative, racist, Christophobic comments, and streams not related to the storyline. Multiple comments from one person under a story are also discouraged. Capitalized sentences or comments will be removed (Internet shouting).
The Remnant comments sections are not designed for frequent personal blogging, on-going debates or theological or other disputes between commenters. Please understand that we pay our writers to defend The Remnant’s editorial positions. We thus acknowledge no moral obligation whatsoever to allow anyone and everyone to try to undermine our editorial policy and create a general nuisance on our website.  Therefore, Remnant moderators reserve the right to edit or remove comments, and comments do not necessarily represent the views of The Remnant.
back to top
Last modified on Friday, May 21, 2021
Tweet

More in this category: « CROSSING DAVOS: Christianity vs. the New World Order What’s the Big Deal with the Pentecost Octave? »