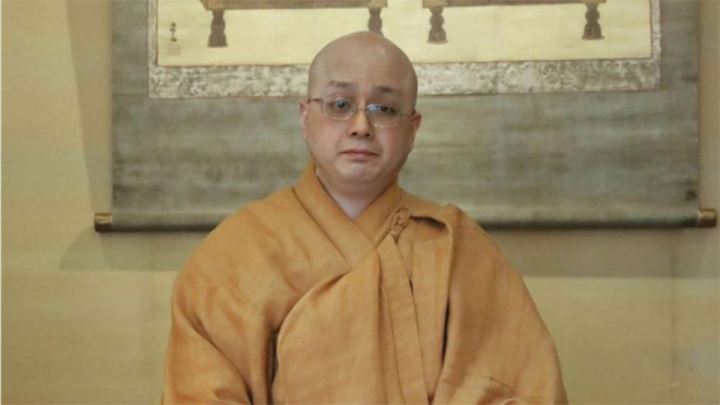 On April 1, 2021, a man named Watanabe Mitsuomi emerged from a secluded enclave on the grounds of the Enryakuji temple on Mt. Hiei, on the outskirts of Kyoto. In keeping with a tradition stretching back nearly unbroken for twelve centuries, Watanabe—an unassuming-looking monk dressed in pale saffron robes and wearing nondescript eyeglasses under his shaved head—had spent every single day for twelve years rising at four a.m. to read aloud the Buddhist sutras. The former engineering graduate and company employee entered monastic life in 2002, and in April of 2009 he swore off television, newspapers, and other contact with the outside world. For twelve years after that, he devoted himself to prayer on Mt. Hiei, utterly alone.

Like a time traveler, when his twelve years of rōzan (“holed up in the mountains”) was finished, Watanabe stepped back into a world that had changed radically since he left it. I could not help but think about how unrecognizable things would be to an American who had gone up into the hills of Arkansas in April of 2009 only to come back down blinking into the USA of 2021.

Not battles and boot camp, but pregnant women in flight suits and accommodating gender dysphoria, was the talk of the Potomac.

Consider that in April of 2009, for example, Barack Hussein Obama was still three years and one month away from “evolving” on the question of whether sodomy constituted marriage. The Defense of Marriage Act—always a stop-gap political measure, to be sure—remained in effect.

A mild-mannered monk in a Buddhist temple was just halfway through his dozen years of sutra-reading when the United States Supreme Court uprooted thousands of years of tradition from virtually every human society that had ever existed. The sutra practices that Watanabe performed were initiated by a Tendai monk named Saichō around the turn of the ninth century. By contrast, it was just one year from Obama’s “evolution” to Windsor, and just two more years to Obergefell. In April of 2009, the United States military was still at the pinnacle of strength and internal composition. Don’t Ask, Don’t Tell was the policy.

In October of 2019, when Watanabe was still some year and a half away from completing his sutra cycle, Pope Francis blessed a pagan she-devil idol and then processed it into St. Peter’s Basilica.

By the time Watanabe wrapped up his twelve years of sutra-chanting, however, the Pentagon had taken the lead in indoctrinating the military in anti-American propaganda. The ranks were bombarded, not by enemy mortar rounds, but by books and PowerPoint presentations about critical race theory. The mission of the Pentagon had changed from combat to politics. Honest-to-goodness apparatchiks and political minders were being assigned to monitor the political purity of the enlisted and officers alike. Not battles and boot camp, but pregnant women in flight suits and accommodating gender dysphoria, was the talk of the Potomac when Watanabe sat down among his fellow monks for the first time in more than a decade a few days ago.

In a bitter twist of irony, the country which had instructed Watanabe’s spiritual master, Saichō, in the esoterics of Tendai Buddhism was, when Watanabe finished his Tendai readings, engaged in a new kind of esoterics—that of the liberal-supported genocide. One would think that the American military would be just the organization to put a stop to this kind of horror, but things had changed quite a bit since April of 2009.

In Alaska in 2021, the Americans tried chiding the former Buddhists for their extermination campaigns against innocent women and children in Uighur concentration camps. But in the past twelve years the NBA had declared itself on the side of the genocidists, and virtually every other institution had followed suit. Anti-American had become the esoteric religion of the American elite. The hapless American bureaucrats in Alaska were forced to agree with the genocidists that, yes, America was thoroughly racist and not worth defending in the first place. Precisely what the military teaches our troops today. This would have been unthinkable in April of 2009.

The Chinese Communist Party, which one of Francis’ top deputies, Bishop Marcelo Sanchez Sorondo, has called “a model of Catholic social teaching”.

And, in April of 2009, the pope was a Catholic. Battling against the dictatorship of relativism—and actually welcoming a meeting with the Dalai Lama in defiance of the genocidal globalists in Beijing—Benedict XVI maintained the teachings of the Church despite enormous pressure from globalists to fall in line with their agenda.

In October of 2019, when Watanabe was still some year and a half away from completing his sutra cycle, Benedict’s successor, Pope Francis, abandoned the martyrs, the missionaries, and the Magisterium when he blessed a pagan she-devil idol and then processed it into St. Peter’s Basilica, where it was placed before the altar of God.

It was likely in that same month that a dangerous bioweapon escaped from a globalist-funded laboratory in Wuhan, where genocidal mastermind Xi Jinping’s own spiritual father, Mao Zedong, once maintained a private villa. Watanabe continued his prayers oblivious to the global plague visited upon humanity by the Chinese Communist Party, which one of Francis’ top deputies, Bishop Marcelo Sanchez Sorondo, has called “a model of Catholic social teaching”. It took as many years as there had been apostles for Rome to “evolve” into communion with the People’s Republic of China.

Jorge Mario Bergoglio was halfway through a second term as president of the Argentine Episcopal Conference, puttering away in the Peronist garden of ecclesial politics in South America.

Over the past dozen years, we have gotten a million different glimpses of what the globalists mean when they speak of “progress”. There is always more evolving to do, always another revolution needed to cure the ills of the last one. None of this has anything to do with God. In fact, the point of evolving is to disentangle ourselves from the Commandments and to absolve humanity of its duty to love and serve God in this life and be happy with Him in the next.

These past twelve years we humans have taken the reins, and have sped progress without telos up to warp speed. It’s a vision of hell.

These past twelve years we humans have taken the reins, and have sped progress without telos up to warp speed. It’s a vision of hell. Hell, in fine, is eternal progress.

To you also in this hellish present, I ask: Imagine if you had gone up on Mt. Hiei twelve years ago and closed the door to the world. When you came back into civilization in April of 2021, would you recognize your surroundings?

[Comment Guidelines - Click to view]
The Remnant values the comments and input of our visitors. It’s no secret, however, that trolls exist, and trolls can do a lot of damage to a brand. Therefore, our comments are heavily monitored 24/7 by Remnant moderators around the country.  They have been instructed to remove demeaning, hostile, needlessly combative, racist, Christophobic comments, and streams not related to the storyline. Multiple comments from one person under a story are also discouraged. Capitalized sentences or comments will be removed (Internet shouting).
The Remnant comments sections are not designed for frequent personal blogging, on-going debates or theological or other disputes between commenters. Please understand that we pay our writers to defend The Remnant’s editorial positions. We thus acknowledge no moral obligation whatsoever to allow anyone and everyone to try to undermine our editorial policy and create a general nuisance on our website.  Therefore, Remnant moderators reserve the right to edit or remove comments, and comments do not necessarily represent the views of The Remnant.
back to top
Last modified on Wednesday, April 14, 2021
Tweet

More in this category: « GOOD FRIDAY MEDITATION: The Only Great Reset That Matters All-Star Strikeout »