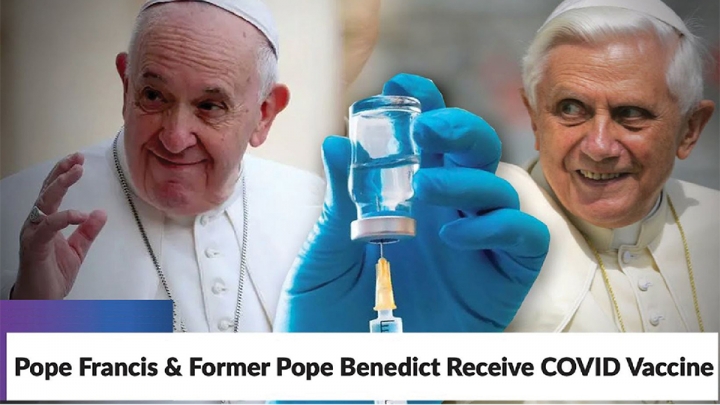 If the Vatican is willing to instruct the faithful to passively cooperate with abortion derived vaccines, then the Vatican will likely disown their failure to resist immoral research.  As more light is shed upon this depravity of the Vatican, it will become clear that the conflicts of interest prevent the Vatican from offering any credible guidance regarding the grave sin of murder derived vaccines.  Along with the multiple scandals tied to the Dermatopathic Institute of the Immaculate (IDI), the IDI is responsible for various experiments with HEK 293.  In light of the murdered child being repeatedly used by the Vatican research center, it is reasonable to suspect that all current and future Vatican hospitals, research centers and drug labs will not prohibit the use of other murdered children.

The illicit experiments found in these papers were performed in Vatican owned and operated laboratories.  The Vatican owns these sins.

THE JOURNAL OF BIOLOGICAL CHEMISTRY, December 11, 2009

Proteolytic Activation Cascade of the Netherton Syndrome–Defective Protein, LEKTI, in the Epidermis: Implications for Skin Homeostasis

PNAS (Proceedings of the National Academy of Sciences), January 24, 2012

These studies, credited with contributions from Vatican entities, conducted experiments with HEK 293.  The illicit experiments found in these papers were performed in Vatican owned and operated laboratories.  The Vatican owns these sins.

The Pontifical Academy for Life’s 2005 document, Moral Reflections About Vaccines Prepared From Cells of Aborted Human Fetuses, admitted that it is sinful to use aborted fetal cells for scientific research.  The Vatican owned and operated Dermatopathic Institute of the Immaculate has continually committed this sin.  The examples above show that the Vatican directly participates in the grave sin of using aborted fetal cells for medical research.

Though the Congregation for The Doctrine of Faith may have failed to stand against murder derived vaccines, they did manage to leave no excuse for the Vatican’s direct participation in evil.

Though the Congregation for The Doctrine of Faith may have failed to stand against murder derived vaccines, they did manage to leave no excuse for the Vatican’s direct participation in evil.  The Congregation for the Doctrine of The Faith offers the following teaching from their 2008 document entitled Instruction Dignitas Personae on Certain Bioethical Questions:

"In this regard, the criterion of independence as it has been formulated by some ethics committees is not sufficient. According to this criterion, the use of “biological material” of illicit origin would be ethically permissible provided there is a clear separation between those who, on the one hand, produce, freeze and cause the death of embryos and, on the other, the researchers involved in scientific experimentation. The criterion of independence is not sufficient to avoid a contradiction in the attitude of the person who says that he does not approve of the injustice perpetrated by others, but at the same time accepts for his own work the “biological material” which the others have obtained by means of that injustice. When the illicit action is endorsed by the laws which regulate healthcare and scientific research, it is necessary to distance oneself from the evil aspects of that system in order not to give the impression of a certain toleration or tacit acceptance of actions which are gravely unjust.  Any appearance of acceptance would in fact contribute to the growing indifference to, if not the approval of, such actions in certain medical and political circles."

It should not surprise us to discover that along with the sins of clericalism, the same hierarchy mired in financial corruption, sexual perversion, and systemic child abuse, is also guilty of illicit participation in the trafficking of murdered babies.  Along with direct participation in the grave sins of death-cult science, the Vatican leads the faithful to participate in direct communion with the antisacrament of vaccines derived from child sacrifice.

The evil lie is caught in the tangled web of the 2005 Pontifical Academy for Life document.  In spite of that document’s many deficiencies, there was still a moral guideline that prevents the faithful from receiving murder derived vaccines.  According to the document, for murder derived vaccines to be received, the following four conditions must be met:

Though, under certain conditions, it may be tolerable to accept murder derived vaccines, these vaccines are never capable of being accepted as moral goods.  They are evil.  They are Satanic.  They pose grave danger to your embodied soul.  Vaccines derived from murdered young ones are not moral goods.

Any and every golden-calf-vaccine associated with murdered offspring, murdered children sacrificed for the lie of Satan, any and every vaccine of this kind, should be destroyed and abolished.  This should be the clear statement of the Pontifical Academy for Life, were it worthy of the name.

[Comment Guidelines - Click to view]
The Remnant values the comments and input of our visitors. It’s no secret, however, that trolls exist, and trolls can do a lot of damage to a brand. Therefore, our comments are heavily monitored 24/7 by Remnant moderators around the country.  They have been instructed to remove demeaning, hostile, needlessly combative, racist, Christophobic comments, and streams not related to the storyline. Multiple comments from one person under a story are also discouraged. Capitalized sentences or comments will be removed (Internet shouting).
The Remnant comments sections are not designed for frequent personal blogging, on-going debates or theological or other disputes between commenters. Please understand that we pay our writers to defend The Remnant’s editorial positions. We thus acknowledge no moral obligation whatsoever to allow anyone and everyone to try to undermine our editorial policy and create a general nuisance on our website.  Therefore, Remnant moderators reserve the right to edit or remove comments, and comments do not necessarily represent the views of The Remnant.
back to top
Last modified on Saturday, March 6, 2021
Tweet
More in this category: « Mask Wednesday COVID CASINO: Vaccination Roulette »