Bishops Schneider, Strickland on the Morality of Vaccines 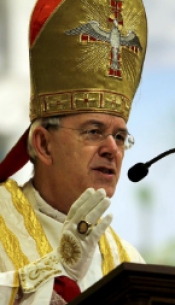 Editor's Intro: With most of the world now facing the unsettling prospect of being forced to take a vaccination against a virus with a 99.5 percent recovery rate, we are truly grateful to Bishop Athanasius Schneider and Bishop Joseph Strickland for issuing this important new statement on the moral illicitness of vaccines derived from the fetal cell lines of aborted fetuses.

Not all the vaccine candidates include fetal cells, but it is important for Christians everywhere to understand the differences and to become familiar with the moral ramification of accepting vaccines which are the work of those who evidently have no problem violating the sanctity of life in this ghoulish manner.

Please note that this statement is dated December 12, 2020, the liturgical memorial of Our Lady of Guadalupe, Patroness of the Unborn. May she intercede for us to that we may have the strength to know and understand our duty as Christians to uphold the moral law in these troubling and indeed Christophobic times.

As noted in the text, the statement "was written at the advice and counsel of doctors and scientists from various countries." 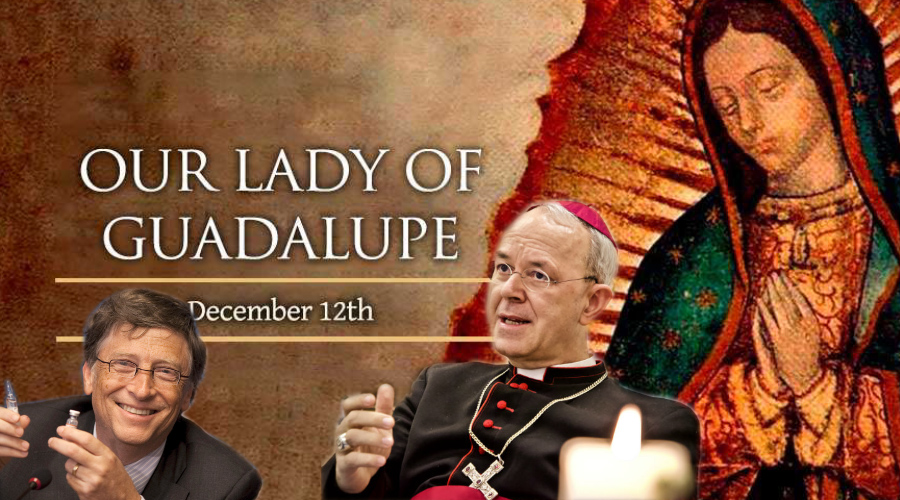 In recent weeks, news agencies and various information sources have reported that, in response to the Covid-19 emergency, some countries have produced vaccines using cell lines from aborted human fetuses. In other countries, such vaccines are being planned.

A growing chorus of churchmen (bishops’ conferences, individual bishops, and priests) has said that, in the event that no alternative vaccine using ethically licit substances is available, it would be morally permissible for Catholics to receive vaccines made from the cell lines of aborted babies. Supporters of this position invoke two documents of the Holy See: the first, from the Pontifical Academy for Life, is titled, “Moral reflections on vaccines prepared from cells derived from aborted human fetuses” and was issued on June 9, 2005; the second, an Instruction from the Congregation for the Doctrine of the Faith, is titled, “Dignitas Personae, on certain bioethical questions” and was issued on September 8, 2008. Both of these documents allow for the use of such vaccines in exceptional cases and for a limited time, on the basis of what in moral theology is called remote, passive, material cooperation with evil. The aforementioned documents assert that Catholics who use such vaccines at the same time have “the duty to make known their disagreement and to ask that their healthcare system make other types of vaccines available.”

In the case of vaccines made from the cell lines of aborted human fetuses, we see a clear contradiction between the Catholic doctrine to categorically, and beyond the shadow of any doubt, reject abortion in all cases as a grave moral evil that cries out to heaven for vengeance (see Catechism of the Catholic Church n. 2268, n. 2270), and the practice of regarding vaccines derived from aborted fetal cell lines as morally acceptable in exceptional cases of “urgent need” — on the grounds of remote, passive, material cooperation. To argue that such vaccines can be morally licit if there is no alternative is in itself contradictory and cannot be acceptable for Catholics.

One ought to recall the following words of Pope John Paul II regarding the dignity of unborn human life: “The inviolability of the person which is a reflection of the absolute inviolability of God, finds its primary and fundamental expression in the inviolability of human life. Above all, the common outcry, which is justly made on behalf of human rights — for example, the right to health, to home, to work, to family, to culture — is false and illusory if the right to life, the most basic and fundamental right and the condition for all other personal rights, is not defended with maximum determination.” (Christifideles Laici, 38). Using vaccines made from the cells of murdered unborn children contradicts a “maximum determination” to defend unborn life.

The theological principle of material cooperation is certainly valid and may be applied to a whole host of cases (e.g. in paying taxes, the use of products made from slave labor, and so on). However, this principle can hardly be applied to the case of vaccines made from fetal cell lines, because those who knowingly and voluntarily receive such vaccines enter into a kind of concatenation, albeit very remote, with the process of the abortion industry. The crime of abortion is so monstrous that any kind of concatenation with this crime, even a very remote one, is immoral and cannot be accepted under any circumstances by a Catholic once he has become fully aware of it. One who uses these vaccines must realize that his body is benefitting from the “fruits” (although steps removed through a series of chemical processes) of one of mankind’s greatest crimes.

Any link to the abortion process, even the most remote and implicit, will cast a shadow over the Church’s duty to bear unwavering witness to the truth that abortion must be utterly rejected. The ends cannot justify the means. We are living through one of the worst genocides known to man. Millions upon millions of babies across the world have been slaughtered in their mother’s womb, and day after day this hidden genocide continues through the abortion industry, biomedical research and fetal technology, and a push by governments and international bodies to promote such vaccines as one of their goals. Now is not the time for Catholics to yield; to do so would be grossly irresponsible. The acceptance of these vaccines by Catholics, on the grounds that they involve only a “remote, passive and material cooperation” with evil, would play into the hands of the Church’s enemies and weaken her as the last stronghold against the evil of abortion.

What else can a vaccine derived from fetal cell lines be other than a violation of the God-given Order of Creation? For it is based on a serious violation of this Order through the murder of an unborn child. Had this child not been denied the right to life, had his cells (which have been further cultivated several times in the lab) not been made available for the production of a vaccine, they could not be marketed. We therefore have here a double violation of God’s holy Order: on the one hand, through the abortion itself, and on the other hand, through the heinous business of trafficking and marketing the remains of aborted children. Yet, this double disregard for the divine Order of Creation can never be justified, not even on the grounds of preserving the health of a person or society through such vaccines. Our society has created a substitute religion: health has been made the highest good, a substitute god to whom sacrifices must be offered — in this case, through a vaccine based on the death of another human life.

In examining the ethical questions surrounding vaccines, we have to ask ourselves: How and why did all of this become possible? Was there truly no alternative? Why did murder-based technology emerge in medicine, whose purpose is instead to bring life and health? Bio-medical research that exploits the innocent unborn and uses their bodies as “raw material” for the purpose of vaccines seems more akin to cannibalism than medicine. We also ought to consider that, for some in the bio-medical industry, the cell lines of unborn children are a “product,” the abortionist and vaccine manufacturer are the “supplier,” and the recipients of the vaccine are “consumers.” Technology based on murder is rooted in hopelessness and ends in despair. We must resist the myth that “there is no alternative.” On the contrary, we must proceed with the hope and conviction that alternatives exist, and that human ingenuity, with the help of God, can discover them. This is the only way to pass from darkness to light, and from death to life.

The Lord said that in the end times even the elect will be seduced (cf. Mk. 13:22). Today, the entire Church and all Catholic faithful must urgently seek to be strengthened in the doctrine and practice of the faith. In confronting the evil of abortion, more than ever Catholics must “abstain from all appearance of evil” (1 Thess. 5:22). Bodily health is not an absolute value. Obedience to the law of God and the eternal salvation of the souls must be given primacy. Vaccines derived from the cells of cruelly murdered unborn children are clearly apocalyptic in character and may possibly foreshadow the mark of the beast (see Rev. 13:16).

Some churchmen in our day reassure the faithful by affirming that receiving a Covid-19 vaccine derived from the cell lines of an aborted child is morally licit if an alternative is not available. They justify their assertion on the basis of “material and remote cooperation” with evil. Such affirmations are extremely anti-pastoral and counterproductive, especially when one considers the increasingly apocalyptic character of the abortion industry, and the inhuman nature of some biomedical research and embryonic technology. Now more than ever, Catholics categorically cannot encourage and promote the sin of abortion, even in the slightest, by accepting these vaccines. Therefore, as Successors of the Apostles and Shepherds responsible for the eternal salvation of souls, we consider it impossible to be silent and maintain an ambiguous attitude regarding our duty to resist with “maximum of determination” (Pope John Paul II) against the “unspeakable crime” of abortion (II Vatican Council, Gaudium et Spes, 51).

This statement was written at the advice and counsel of doctors and scientists from various countries. A substantial contribution also came from the laity: from grandmothers, grandfathers, fathers and mothers of families, and from young people. All of those consulted — independent of age, nationality and profession — unanimously and almost instinctively rejected the idea of a vaccine derived from the cell lines of aborted children. Furthermore, they considered the justification offered for using such vaccines (i.e. “material remote cooperation”) as weak and unsuitable. This is comforting and, at the same time, very revealing: their unanimous response is a further demonstration of the strength of reason and the sensus fidei.

More than ever, we need the spirit of the confessors and martyrs who avoided the slightest suspicion of collaboration with the evil of their own age. The Word of God says: “Be simple as children of God without reproach in the midst of a depraved and perverse generation, in which you must shine like lights in the world” (Phil. 2, 15).

December 12, 2020, Memorial of the Blessed Virgin Mary of Guadalupe

+ Tomash Peta, Metropolitan archbishop of the archdiocese of Saint Mary in Astana

+ Athanasius Schneider, Auxiliary bishop of the archdiocese of Saint Mary in Astana

[Comment Guidelines - Click to view]
The Remnant values the comments and input of our visitors. It’s no secret, however, that trolls exist, and trolls can do a lot of damage to a brand. Therefore, our comments are heavily monitored 24/7 by Remnant moderators around the country.  They have been instructed to remove demeaning, hostile, needlessly combative, racist, Christophobic comments, and streams not related to the storyline. Multiple comments from one person under a story are also discouraged. Capitalized sentences or comments will be removed (Internet shouting).
The Remnant comments sections are not designed for frequent personal blogging, on-going debates or theological or other disputes between commenters. Please understand that we pay our writers to defend The Remnant’s editorial positions. We thus acknowledge no moral obligation whatsoever to allow anyone and everyone to try to undermine our editorial policy and create a general nuisance on our website.  Therefore, Remnant moderators reserve the right to edit or remove comments, and comments do not necessarily represent the views of The Remnant.
back to top
Last modified on Friday, December 11, 2020
Tweet

More in this category: « Election 2020: The Ave Maria Game WAR IN HELL: A Report on the DC Stop the Steal Rally »