A Time to Heel 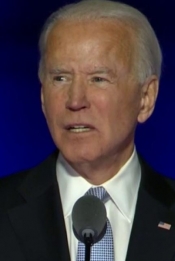 Joe Biden’s “time for healing” and to “stop treating our opponents as our enemies” speech was anything but Lincolnesque as the most divisive, volatile election since the Civil War has put many in doubt.

One teacher’s union has already demanded that Biden oppose any charter school expansion, while putting an end to school choice for Washington D.C.’s low-income families.  This is the same city that Biden won 93 percent of the vote.  With such gaudy numbers, Democrats must believe that everyone is as easily manipulated.

Biden’s Chief of Staff Ron Klain is a former lobbyist for Silicon Valley titans Google, Facebook and Twitter, so forget about restricting their monopoly of social media censorship.

For at least two generations, Democrats have amplified how politics is not about compromise, but unadulterated power.  Any opposition is accused of being a racist, homophobic, and xenophobic bigot who must be subdued by any means in a nation where Judeo-Christian principles once governed our hearts and minds.

Turning a jaundiced eye toward Biden’s platitudes after tens of millions of Americans remain convinced the election was stolen isn’t difficult.  Biden’s plea is political virtue-signaling in the first-degree. Leftists in government, media, sports, big-tech, and entertainment continue to wage a relentless smear campaign against Trump and those who voted for him.

Democrats arrogantly called themselves the “resistance”, saying Trump was an “illegitimate” president before he was even sworn in.  So, after four years of character assassination, anti-Trump hysteria and impeachment, race baiting, rioting, looting, and arson, Democrats now want healing.

In Biden-speak, “healing” is code for tax dollars that will subsidize abortions, mask and vaccination mandates, open borders, Green New Deal, reparations, and tax increases.  Such actions will only exacerbate conflict and constitutional disputes.

Healing should include exposing any election fraud, no?

Reconciling will occur when the unbridled slaughter of the unborn ends, and when the Little Sisters of the Poor and every other faith group’s conscience is protected.

With healing comes truth and transparency.

How did Biden retail his influence as vice president to the Chinese, Russians and Ukrainians?  What about the police and business owners who were killed, injured and looted?   Are the blacks who supported Trump still black?  Are the nearly 74,000,000 voters for Trump still “systemic” racists?  What about AOC’s call for persecution of them?   What about Biden’s silence on the Gen. Flynn cabal, the Mueller decapitation, and the Steele dossier, knowing they were all a pack of lies?  The left has not only opposed Trump’s policies; they have opposed his very existence.  And now after such debauchery, they insist on singing a chorus of kumbaya’s?

Provided Biden is serious, he will get plenty of flak from his own party. And don’t forget Kamala Harris beacons a heartbeat away.

The healing Biden desires only happens after amputations.

Healing and unity for Democrats is a one-way street and only applies when they are in control, which is why the runoff senate race in Georgia on Jan. 5, 2021 is pivotal.  Provided the GOP is victorious, Biden will have no choice but to govern from the center at least for the first two years of his administration.  That is, provided the political mooring of Mitt Romney, Lisa Murkowski and Susan Collins, refuse to stand fast.

There are more instances of the abridgment of the freedom of the people by the gradual and silent encroachment of those in power than by violent and sudden usurpation.”

Biden, like Obama, will soon occupy the same White House as James Madison, the owner of that quote and father of our Constitution.  Obama and Biden never knew him, but Madison clearly knew them and those like them.

Unifying the country by a career politician like Biden is wishful at best.  If Washington D.C. is the swamp, then the 78-year-old Biden is its version of the swamp fox.

Our fundamental divisions concentrate on a demise of traditional, moral values.  They are essentially spiritual schisms which evolve from our relationship, or lack thereof, with God.  However, no matter how divided we used to be by political ideology, the nation always historically managed to circle the wagons around our shared Judeo-Christian roots, where its foundational virtues and conventions were passed down from generation to generation.

Authentic healing will only come through the grace of Divine Providence, not ersatz political bipartisanship.

More in this category: « CATHOLIC ACTION: SSPX Priest pens Open Letter to Archbishop of Tokyo Viganò on the Great Reset »