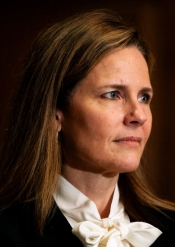 She does not just believe her faith and legal opinions; she lives them and therein lies the problem.
_____________

As the nation lurches toward the most combative presidential election in generations, another vindictive Supreme Court confirmation hearing will serve as its prologue.

Nominee Amy Coney Barrett’s intellect, character, and temperament is precisely the class of jurist America needs on the Supreme Court. What the nation does not need is another contentious and antagonistic round of hearings in order to get it done.

Shortly after President Trump announced Barrett as his selection, some circulating comments were that she must be an “elitist” having finished first in law school at Notre Dame.  Moreover, since she and her husband adopted two children from Haiti, the poorest country in the Western Hemisphere, she must be a “white colonizer.”

The hearings will not be Barrett’s first confirmation rodeo; she already experienced just how malicious democrats can be when her Catholic faith was challenged by Sen. Diane Feinstein, the ranking member of the Senate Judicial Committee, during her 2017 nomination for the 7th Circuit Court of Appeals. “When you read your speeches,” Feinstein said, “the conclusion one draws is that the (Catholic) dogma lives loudly within you.”

It was Feinstein’s way of signaling her fellow democrats that then-Professor Barrett opposed abortion.  Why is Barrett not treated with the same cavalier attitude that they have toward Joe Biden’s Catholicism?

The Democrats on the Senate Judicial Committee will attempt to portray Barrett as a judicial extremist and religious zealot. The New York Times estimates that $40 million will be spent fighting Barrett’s confirmation.

Regardless of your political or religious affiliation, such questioning violates the Constitution’s guarantee in Article VI, Clause 3 that “no religious test shall ever be required as a qualification to any office or public trust under the United States.”  These constant attacks underscore how Christianity has become increasingly countercultural.

Once upon a time in America, Barrett’s nomination would have been met with celebration, not condemnation. The Senate confirmed Supreme Court Justice Antonin Scalia, for whom Barrett clerked, by a 98-0 vote.  Then again, that was in 1986.

Not all on the left are against Barrett and rightly so.  Barrett’s expertise, character, and collaborative temperament have been applauded.  Harvard law professor Noah Feldman, a self-described liberal, writes:

“I know her to be a brilliant and conscientious lawyer who will analyze and decide cases in good faith, applying the jurisprudential principles to which she is committed. Those are the basic criteria for being a good justice.  Barrett meets and exceeds them.”

Feldman admits that he disagrees with Barrett’s judicial philosophy but respects her ability and character.  If a liberal would endorse Barrett, why is there so much opposition?  The problem lies not with her aptitude or qualifications, but with her religiosity.  She does not just believe her faith and legal opinions; she lives them and therein lies the problem.

Barrett served on the 7th Circuit without reproach in a career built on judicial acumen, while embracing who she is as a woman, wife, and mother of seven.  Barrett’s youngest child has Down syndrome; two-thirds of American babies diagnosed with this condition are aborted and this has the left quaking in their boots.

Her confirmation will unlikely end legalized abortion. Rather, it could end federally imposed abortion.  It is in the states where abortion remains lawful that the fight for the unborn will continue.

After a half century of enduring the Democrat Party’s counterfeit “living” Constitution, Barrett understands that as a justice she is to interpret the law – not make it.  A return to Constitutionally based rulings at a time when Democrats and their leftists allies are content to ignore the Bill of Rights is desperately needed.

Considering how Democrats’ shameful character assassination of Brett Kavanaugh’s confirmation hearings dragged on and embarrassed the nation, having Barrett fill Ginsburg’s vacancy is nothing short of judicial karma.

This nomination could be the latest chapter in the decline of the Senate that was once described by President James Buchanan as “the greatest deliberative body in the world.”

Provided Barrett responds to any acrimony with the same grace and dignity she has demonstrated throughout her career, she will do much to advance the Gospel.

Senate Democrats need to confirm this excellent nominee who will assist in restoring judicial sanity and proper constitutional government that is long overdue.

[Comment Guidelines - Click to view]
The Remnant values the comments and input of our visitors. It’s no secret, however, that trolls exist, and trolls can do a lot of damage to a brand. Therefore, our comments are heavily monitored 24/7 by Remnant moderators around the country.  They have been instructed to remove demeaning, hostile, needlessly combative, racist, Christophobic comments, and streams not related to the storyline. Multiple comments from one person under a story are also discouraged. Capitalized sentences or comments will be removed (Internet shouting).
The Remnant comments sections are not designed for frequent personal blogging, on-going debates or theological or other disputes between commenters. Please understand that we pay our writers to defend The Remnant’s editorial positions. We thus acknowledge no moral obligation whatsoever to allow anyone and everyone to try to undermine our editorial policy and create a general nuisance on our website.  Therefore, Remnant moderators reserve the right to edit or remove comments, and comments do not necessarily represent the views of The Remnant.
back to top
Last modified on Friday, October 9, 2020
Tweet

More in this category: « Bishop Schneider Facebook livestream conference on Fatima LEPANTO REVISITED: Trump and the World on the Brink »