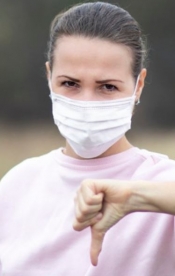 A Letter from a Concerned Reader...

I entered the church at 11am. I was greeted and my temperature was taken, and I was told to have a good day by the greeter in the church.

I sat, (very) socially distanced, in a pew, with no face mask on.

I was approached by a man with a face mask and a plastic guard over his face and told to put a face mask on. I politely told him that I do not wear a mask.

He then said, “Ma’am, you need to put a face mask on”. I politely told him that I do not wear a face mask.

Then, as the processional song ended, the priest, from the altar, before he started holy mass, shouts out to me, “Ma’am, you need to put a face mask on.”

I politely said, “Father, I am exempt from having to wear one.”

Shame on you Father. You, sir, are doing the work of Satan.”

Then several other people started booing me and 4 men escorted me out. I was outside of the church and a deacon came out, almost apologetically told me that if I waited outside, he would serve me the Holy Eucharist. I thanked him and walked to my car and sat in it, upset at what had happened. Then, as I sat in my car, the security guard came and took a photo of my car/license plate. I got out of my car and asked him what he was doing.

He said that he was done talking to me and that he could tell I was going to be trouble as I walked into the church.

I calmly asked the other man why they were taking a photo of my license plate. He told me that they needed it for their “paperwork”. When I asked, “what paperwork”, he ignored me and told the security guard to call the police because I was criminally trespassing. I went and sat in my car.

The police arrived in 2 separate cars. I walked up to them and one of the policemen asked me what was going on. I told him exactly what happened, and he told me that I was criminally trespassing and that he would give me a “warning ticket”. He asked for my driver’s license and I questioned that as well. I walked over to my car and the policeman followed me.

Video of priest calling the police at minute 3:26

I asked him to please “call off the dogs (the 2 men from the church) because they were clearly trying to harass and intimidate me”. The policeman told me that they were just “doing their job”, so they stayed there.

I gave my driver’s license to the policeman and he told me he would be back in a few minutes. The policeman came back and asked me to sign a document of acknowledgement, with my finger, on his device. I asked what I was acknowledging. He told me to sign it and then he would give me a copy of it. I said that I was not going to sign anything until I knew what it was I was signing. I wanted to read what I was signing.

He asked me if I were refusing because if I were, he would arrest me.

I said that I was not going to sign a document until I had a chance to know what it was I was signing. He said he would read it to me, which he did. I signed it, he went back to his car and then returned with a copy of it and told me to leave the premises. I told the 2 men from the church that I was going to stay to receive the Holy Eucharist and they told me that I was not allowed to receive it now because I had criminally trespassed.

I left the church.

I am going to find out the legality of criminal trespassing. They may be in their legal right, or not.

The MOST dangerous part of this experience is that the priest made the decision to call me out in front of the entire church body, stopping the holy mass, to insist that I put a face mask on or leave. Why?

Why would he decide that he needed to force this issue when I was at least 15 feet away from any other person; had had my temperature taken upon entering the church and was sitting alone, waiting for mass to start.

This had NOTHING to do with the spread of a virus. It had everything to do with forcing his own agenda. He was so in it for power that he exemplified it in front of the entire parish, interrupted the holy mass just to embarrass me and harass me and to show just how powerful he is. A loud few joined in booing and shouting at me to “Get the Hell and out of here”. The priest said nothing to them for their behavior.

This is yet another of many, many similar or worse examples of what the people in power are doing to us all, even in our churches.

[Comment Guidelines - Click to view]
The Remnant values the comments and input of our visitors. It’s no secret, however, that trolls exist, and trolls can do a lot of damage to a brand. Therefore, our comments are heavily monitored 24/7 by Remnant moderators around the country.  They have been instructed to remove demeaning, hostile, needlessly combative, racist, Christophobic comments, and streams not related to the storyline. Multiple comments from one person under a story are also discouraged. Capitalized sentences or comments will be removed (Internet shouting).
The Remnant comments sections are not designed for frequent personal blogging, on-going debates or theological or other disputes between commenters. Please understand that we pay our writers to defend The Remnant’s editorial positions. We thus acknowledge no moral obligation whatsoever to allow anyone and everyone to try to undermine our editorial policy and create a general nuisance on our website.  Therefore, Remnant moderators reserve the right to edit or remove comments, and comments do not necessarily represent the views of The Remnant.
back to top
Last modified on Monday, July 27, 2020
Tweet

More in this category: « McCARRICK UPDATE: Major Interview of Archbishop Viganò by Marco Tosatti Are you ready for some FOOTBALL!?! »