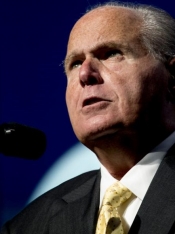 Maybe for a little while we could all stop sharing the death stories on Facebook and the pictures of people on respirators in the hospitals in Italy, and while we settle into the second week of quarantine, take comfort in the fact that men in the position to know a little more than we do, are staring down the panic and helping people feel confident again.

RUSH LIMBAUGH: I’m always interested in people’s reaction to this program. I think I have a lot of empathy, and I think one of the reasons why the relationship you and I have is good is ’cause I know how you hear this show. That, I think, is a key ingredient. It’s called empathy. I know how you hear it.

So when I check emails and get questions from people, usually I’m not surprised, and I’m not surprised that I got beaucoup number of questions: “Rush, you don’t sound panicked over any of this. The last two days, you don’t sound panicked, and yet everybody’s panicked. I’m panicked,” people say in their email. “I’m scared to death. I mean, I’ve looked, the stock market was pulling up to 30,000. Now it’s down to 21,000. The Democrat Party, every move they’re making is designed to grow government, make government bigger, and you don’t seem alarmed.”

Folks, panic is… I don’t know. I’m not panicked. I am ticked off like you cannot believe, and I am really having a conversation with myself about how far to go in explaining why I’m mad, ’cause I’m mad about the politics of this. For example, let me give you some statistics. How many of you even remember the swine flu 2009, 2010? I don’t remember it. I mean, I remember we had it. But I don’t remember any panic about it. I don’t remember a thing about the swine flu.

I went back and looked at the stats and I was stunned. Are you ready for this? The swine flu outbreak in this country in 2009 and 2010, 60 million Americans were infected. Do you remember that? Sixty million were infected. Dr. Siegel, one of the Fox doctors was on TV explaining this last night. He was not my primary source for it, but he ended up confirming it. Sixty million people were infected.

There wasn’t any media panic. The Republican Party did not politicize it at all. They made not one single effort that anybody can find or remember to try to make political hay out of it. It was treated as a health issue from top to bottom. Sixty million Americans infected, 300,000 hospitalized. I don’t know what the death toll was. The numbers with the coronavirus are not even close. They are barely a fraction of a percentage compared to the swine flu.

And then we also had Ebola. And I do remember a little bit more about Ebola, and once again, the Drive-By Media was praising the skills and the composure and the brilliance of Barack Obama in dealing with it. And I remember being kind of ticked off about that because there wasn’t anything anybody can do about Ebola. Ebola is like any of these other viruses. There’s nothing we can do to contain them.

See, the reason I’m not panicked is I don’t have enough emotion left for panic ’cause I’m too mad. I’m too ticked off at this. We’re watching the U.S. economy be wrecked here. There’s some people enjoying it. And it makes me mad. There’s some people’s lives here that are being seriously damaged over this. And you know what’s gonna happen? It’s gonna end. We are going to overcome it. It’s going to fizzle out like all of these do.

How did we ever survive 60 million infected with the swine flu? But we did to the point that hardly anybody remembers it. And that’s just 10 years ago, 300,000 hospitalized. So we overcame it. We overcame Ebola. This is gonna end, it’s gonna pass. And I’ll tell you what else is gonna happen. Because of the actions President Trump has taken, like this travel ban from Europe, that has really put the Democrats in a dicey position.

There’s some real positives if you want to find ’em here, and I, of course, have, and I’ll share them with you in a minute. The point is we’re gonna rebound from this, and when we do, you had better get ready and hold on tight, because this market’s gonna rebound. The people who are selling right now and getting out of it are panicking, and they don’t want to be selling. Everybody’s doing this from a very defensive posture and point of view.

And it’s adding… Like we get news that Tom Hanks and his wife have coronavirus. “Oh, no, it’s all going (mewling)! It’s over. Oh, my…” And then his kid — his kid, Chet — goes on TV, tries to calm everybody. “They’re fine. They’re in Australia. They’re fine. They’re not suffering at all. Everything’s fine!” It doesn’t matter. They’ve got it.

Anyway, this is gonna end, and this market is gonna rebound like you can’t believe because the people who have been selling off want to get back in it. And we are taking economic procedures right now that are going to serve to further reignite the economy when all this passes. And when we get back into the growth trajectory, some of the proposals the president’s making regarding payroll taxes, Small Business Administration loans, even a tax holiday?

You just wait until people have no more emotion left to be panicked and get tired of this and want to go a different direction. And that day is gonna happen. The day’s gonna come where people are gonna wake and say, “I’m tired of living this way. I’m fed up with being panicked every day. I’m fed up,” and then — because of the actions the president’s taken — we’re not gonna have that many brand-new infections.

By shutting off this travel from Europe… As I said, this has really put the Democrats in a bad position ’cause they love the European Union. They love it, and the very fact that travel from their beloved European Union has been shut down… But let… If they come out and oppose this, then they’re essentially coming out for open borders. This is actually… If you want to look at it politically, it’s a good move from that standpoint.

But I’m not panicking ’cause I’m too mad about this.

This is… I don’t know. (sigh) It’s… I know some of you are saying, “Rush, easy for you to say.” It isn’t easy for me to say, folks. Nobody’s immune from what’s happening here. I mean, you go back and you look at these swine flu numbers and you ask, “What was different? (chuckles) What was different was we had a Democrat in the White House and so the media didn’t want to be critical of the government.

Remnant Reminder: Before you jump to blame conservatives for politicizing this thing, here's the lastest from Dr. Drew--certainly no conservative!

[Comment Guidelines - Click to view]
The Remnant values the comments and input of our visitors. It’s no secret, however, that trolls exist, and trolls can do a lot of damage to a brand. Therefore, our comments are heavily monitored 24/7 by Remnant moderators around the country.  They have been instructed to remove demeaning, hostile, needlessly combative, racist, Christophobic comments, and streams not related to the storyline. Multiple comments from one person under a story are also discouraged. Capitalized sentences or comments will be removed (Internet shouting).
The Remnant comments sections are not designed for frequent personal blogging, on-going debates or theological or other disputes between commenters. Please understand that we pay our writers to defend The Remnant’s editorial positions. We thus acknowledge no moral obligation whatsoever to allow anyone and everyone to try to undermine our editorial policy and create a general nuisance on our website.  Therefore, Remnant moderators reserve the right to edit or remove comments, and comments do not necessarily represent the views of The Remnant.
back to top
Last modified on Saturday, March 21, 2020
Tweet

More in this category: « AN OPEN LETTER: For God’s Sake, Don’t Deny Access to Our Church Reflections on the Coronavirus and the Ancient Wisdom of Job »