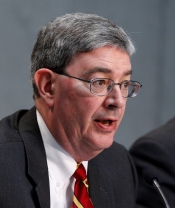 There is not a trace of such an assessment in any of the pronouncements of the Popes before Vatican II.  Quite to the contrary, they consistently remarked the Church’s increasing missionary success despite the world’s hostility. Thus, only a few years before the Council, Pope Pius XII, while observing that “The human race is involved today in a supreme crisis, which will issue in its salvation by Christ, or in its dire destruction,” also observed that missionary activity had grown explosively over the previous 25 years, that that “[t]he preachers of the Gospel are using their talents and energy to extend the Kingdom of Christ,” and that even in the midst of a growing civilizational crisis “it has become more apparent that the religion of Jesus Christ is really Catholic and that no part of the world is excluded from it.”

Yet Weigel shows no signs of regret over the Council’s apocalyptic failure, which of course he cannot admit without discrediting the entire neo-Catholic narrative he has promoted throughout his career. It is the narrative of the Council that gave birth to ineffable intuitions of newness by which the Faith of old has somehow been surpassed in ways from which there is no turning back. These ineffable intuitions have spawned a horde of neologisms that attempt to give them concrete meaning: “collegiality,”   “ecumenism,” “ecumenical venture,” “dialogue,” “ecumenical dialogue,”  “interreligious dialogue,” “dialogue with the world,” “partial communion,” “imperfect communion,” “reconciled diversity,” “the Church of the new Advent,”  “the new springtime of Vatican II,” “the new Pentecost,” “the civilization of love,” “the purification of memory,” “responsible parenthood,” “solidarity,” “the globalization of solidarity,” “the Spirit of Assisi,” “what unites us is greater than what divides us,” and “the New Evangelization” to which Weigel refers.

Then there are the Bergoglian additions: “discernment,” “accompaniment,” “culture of encounter,” “ecological conversion,” “time is greater than space,” the “synodal Church,” the Church as “polyhedron” and assorted other Modernist blather.

As I noted in The Great Façade some 18 years ago: “Never before in Church history has the activity of the Church come to be governed by slogans and buzzwords that appear nowhere in the perennial Magisterium.” And the result has been “corruption, failure and confusion in every area those novelties have touched.” As Cardinal Ratzinger famously observed of the results of the Council:

The results of the Council seem cruelly to have contradicted the expectations everybody had, beginning with John XXIII and Paul VI…. [W]e have been confronted instead with a continuing process of decay that has gone on largely on the basis of appeals to the Council, and thus has discredited the Council in the eyes of many people. [L’Osservatore Romano, November 9, 1984, later to be known as The Ratzinger Report.]

But not in the eyes of what remains of the neo-Catholic establishment after more than six years of a pontificate exhibiting the final stages of the ecclesiastical analogue of rabies.  In the face of the paroxysmal death-agony of the illusory “conciliar Church,” Weigel maintains the pretense that all is well precisely because of its vain novelties, and in particular “the New Evangelization.”

According to Weigel, “the Church has rediscovered the fact that everyone is a missionary, each of us, and everywhere is mission territory, including the places that look really Catholic.”  A moment’s reflection reveals layers of nonsense behind this glittering cliché of neo-Catholic thinking.

First of all, if the Church has “rediscovered” that everyone is a missionary, where is all the missionary activity that should have ensued? Why, instead, does Weigel pronounce the impending death of what remains of Catholic countries, even in overwhelmingly Catholic Poland, where Pope John Paul II, the very herald of the New Evangelization, was born?

Secondly, if before the Council the Church had not yet “rediscovered” that everyone is a missionary, why was there so much growth in missionary activity and the number of conversions immediately before the Council, when missionary work was done by good old missionaries while ordinary lay Catholics lived out their workaday Catholic lives?  And how did the Church extend her influence throughout the world from her humble beginnings in Jerusalem during all those centuries when it was manifestly not the case that “everyone is a missionary”?

Before the Church “rediscovered” that everyone is a missionary—in which case, no one is a missionary as such—not only Pius XII but also John XXIII, the very Pope who launched the Council, was pleased to remark the “the rise and growth of the immense energies and of the apostolate of prayer, of action in all fields” and “the emergence of a clergy constantly better equipped in learning and virtue for its mission; and of laity which has become ever more conscious of its responsibilities within the bosom of the Church, and, in a special way, of its duty to collaborate with the Church hierarchy.” [Apostolic Constitution Humanae Salutis, December 25, 1961].

Indeed, during the deliberations of the Council itself a prominent Council Father (the Armenian Patriarch of Cilicia), echoing Pope Pius XII on the worldwide success of the missions at the Council’s opening, declared that “the Church, notwithstanding the calamities that plague the world, is experiencing a glorious era, if you consider the Christian life of the clergy and of the faithful, the propagation of the faith, and the salutary universal influence possessed by the Church in the world today.” [Wiltgen, “The Rhine Flows into the Tiber”, p. 113]

Yet that same robust “pre-conciliar Church” was quickly reduced to a basket case after the Council that was supposed to give it a new impetus in “the modern world” as the “old” evangelization gave way to the “new” evangelization that has turned out to be no evangelization.

Thirdly, if places that “look Catholic” are not really Catholic but actually missionary territory today, then why should we suppose that those engaged in “the New Evangelization,” whatever that is and whoever these people might be, are really Catholics or that any results they might achieve—which are far from apparent—produce real Catholicism?

Finally, if the “New Evangelization” simply accepts as an irremediable given that there can no longer be Catholic countries because of “21st century cultural conditions,” then has it not already pronounced itself a total failure, incapable of effecting a reconversion of the Western world such as that which followed the collapse of the Roman Empire, a reconversion led precisely by civil authority under the influence of the monasticism the post-conciliar debacle has all but extinguished from the face of the earth?

Like all the remaining exponents of the neo-Catholic narrative, Weigel has effaced from memory what was irreplaceably right with the Church in the centuries before the Council, was abandoned after the Council and must be recovered if the Church is to be restored. Willfully self-deprived of the capacity for a reverent institutional recollection, he is incapable of seeing anything radically wrong with an ill-starred, improvidently convoked, hastily rewritten Council whose pernicious ambiguities provoked a ruinous “implementation” that has devastated the ecclesial commonwealth in all but a few narrow precincts where Tradition survives intact.

Nothing, it seems, can dim the eternal sunshine of the spotless Vatican II mind.

[Comment Guidelines - Click to view]
The Remnant values the comments and input of our visitors. It’s no secret, however, that trolls exist, and trolls can do a lot of damage to a brand. Therefore, our comments are heavily monitored 24/7 by Remnant moderators around the country.  They have been instructed to remove demeaning, hostile, needlessly combative, racist, Christophobic comments, and streams not related to the storyline. Multiple comments from one person under a story are also discouraged. Capitalized sentences or comments will be removed (Internet shouting).
The Remnant comments sections are not designed for frequent personal blogging, on-going debates or theological or other disputes between commenters. Please understand that we pay our writers to defend The Remnant’s editorial positions. We thus acknowledge no moral obligation whatsoever to allow anyone and everyone to try to undermine our editorial policy and create a general nuisance on our website.  Therefore, Remnant moderators reserve the right to edit or remove comments, and comments do not necessarily represent the views of The Remnant.
back to top
Read 3377 times Last modified on Tuesday, January 21, 2020
Tweet

More in this category: « No Creed? No surprises in NuChurch! St. Timothy, Jan 24 »