Andreas Hofer: Hero of the Sacred Heart of Jesus 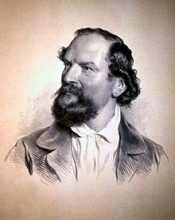 TO ALL MEMBERS OF THE REMNANT LEAGUE OF THE SACRED HEART

Consecration to the SACRED HEART of Jesus features centrally in the history of the Holy Roman Empire and, more particularly, in the uprising by the people of Tyrol, within the Holy Empire, against the secularisation of their country by the French revolutionaries and by Napoleon Bonaparte.

Their leader was an Inn-keeper hero called Andreas Hofer. He, it was, who dedicated his followers and his country specifically to the SACRED HEART of Jesus, just as had the heroic Catholics in the Vendee in France, the Carlists in Spain and the Cristeros in Mexico.

Andreas Hofer is, to this day, the national hero of the Tyrol, the land of “yodelling”, brass “oompah” bands and gentle folk-singing.

Andreas Hofer, the Inn-Keeper hero of the Habsburg land of Tyrol, in his defence of the Catholic Holy Roman Empire against the invasion of the Tyrol by Bonaparte and the French Revolution, 3 times beat the armies of Bonaparte, the enemy of God.

But the SACRED-HEART-consecrated Hofer was, sadly, later betrayed and, by personal order of Napoleon Bonaparte, was tried and shot, faithful to Christ, the Holy Empire and the Faith, unto the end.

Hofer was made, by the Holy Roman Emperor (the Kaiser or “Caesar” of Catholic Christendom) Franz II, Imperial Intendant and Commandant of the Tyrol, after the government had fled, shortly after Hofer had consecrated the whole of the Tyrol to the SACRED HEART of Jesus. That was in 1809 – the famous Anno Neun (Year Nine, so-called) of the Tyrol.

He occupied the Imperial Hofburg (Court Castle), from whence the government had fled, and became the leader of the Catholic resistance to militant secularism in the Tyrol, just like the Vendeans in France, the Carlists in Spain and the Cristeros in Mexico.

Once a year the mountains of the Tyrol, Austria and Italy, are illuminated with high fires in the form of hearts and crosses and the people sing ancient songs to remember the past and glorious years of the Catholic Tyrol, faithful province of the Holy Catholic Empire.

Every year, on the first Sunday after Corpus Christi, the Tyroleans light up high fires on the peaks of the mountains: the fires stand for an ancient tradition dating from 1796, and especially 1809, when the Catholic Tyrol was oppressed by the French revolutionaries, and their Bavarian allies under the secularising and despotic Count Montgelas, Bonaparte’s ally and Chief Minister of the Kingdom of Bavaria.

The Tyroleans, consecrated to the SACRED HEART of Jesus and under command of Andreas Hofer, fought off these secularising enemies of Christ.

They made an oath to the SACRED HEART of Jesus, which, they believed, helped them to win against the oppressors and secularisers invading their Catholic homeland.

The Tyroleans pledged eternal loyalty to Christ under the symbol of the SACRED HEART of Jesus.

With these annual fires, the holy land of Tyrol remembers the oath and renews it every year, the people always celebrating in their ancient costume!

Below is a wonderful painting of the humble peasant leader, Andreas Hofer, receiving a golden chain at the hand of a nobleman sent from Vienna by the Holy Roman Emperor Franz II, marking Hofer’s appointment as Imperial Intendant of the Tyrol, shortly after he had consecrated the Holy Land of the Tyrol to the SACRED HEART of Jesus.

As they say in the Tyrol…

All hail the mountains, Holy Tyrol! 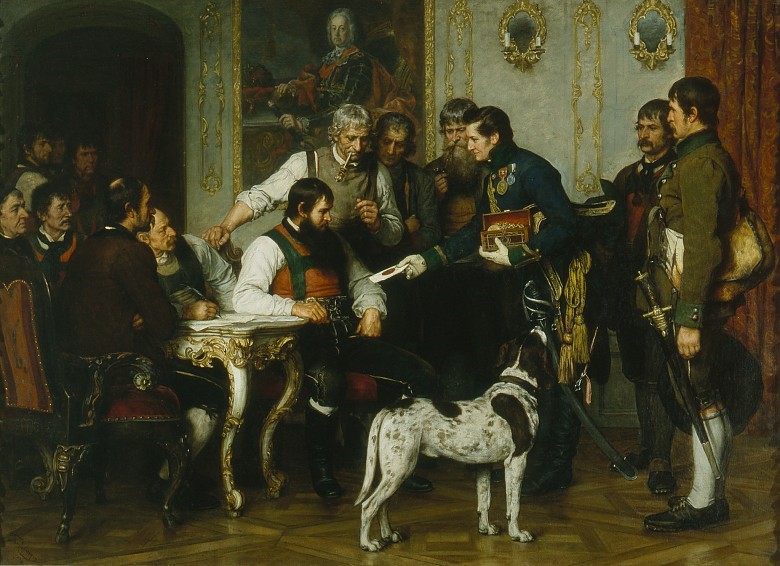 Hofer is seen here in the Imperial Hofburg (Court Castle) in Innsbruck. He was then in charge of the uprising against the secularisation of the Catholic Tyrol by the anti-Catholic Napoleon Bonaparte. Here he is presented with a golden chain by a nobleman sent by the Holy Roman Emperor, Francis II, in Vienna, appointing Hofer as the Imperial Intendant in the Tyrol to defend the sacred land from the forces of the French Revolution. It was said that the normally aristocratic elegance of the Imperial Hofburg was replaced by an assembly of sturdy Tyrolean peasants, in traditional costume of lederhosen (leather trousers), knitted socks, cummerbunds with religious symbols, short jackets and broad-brimmed hats bedecked with feathers, drinking beer from huge biersteins and smoking huge Tyrolean pipes through their long beards, surrounded by their St Bernard mountain dogs. Before each battle Hofer called to his men “You’ve heard your mass, you’ve drunk your schnapps – now forward, in the name of God!”.

In the Tyrol, the Innkeepers, whose families had often owned their inns for centuries, formed a kind of peasant aristocracy, their inns being the centre of trade and survival and they themselves the backbone of the militia, as lieutenants and captains, also making up most of the deputies of the Innsbruck parliament, called the Landtag.

These peasants were deeply faithful to Christ, to Empire and to Faith because they had been granted by the Emperor important rights, since the Middle Ages, later formalised in  the Tirolerfreiheitsbrief (Tyrolean Freedom Brief) of 1342, namely no taxation or conscription without the consent of their own Landtag in Innsbruck.

Like most good ideas, it was a fully Catholic idea, flowering first in the heart of the Catholic Holy Roman Empire. 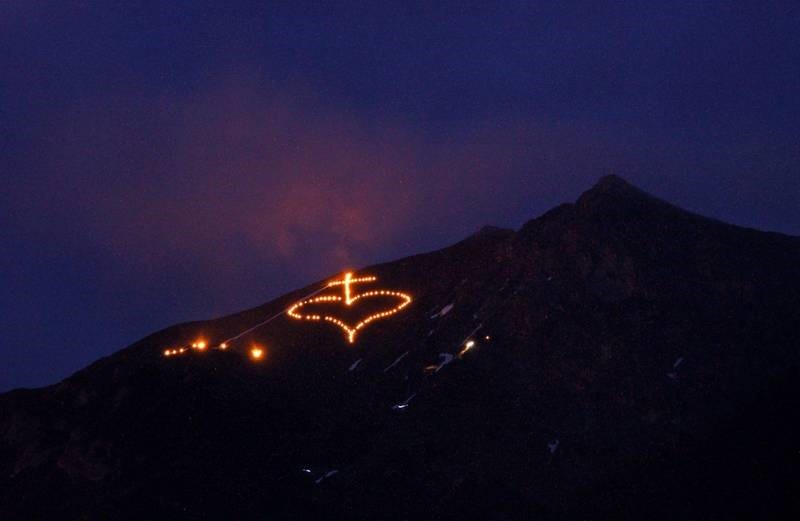 The fires of Herz-Jesu Sunday in the South Tyrol 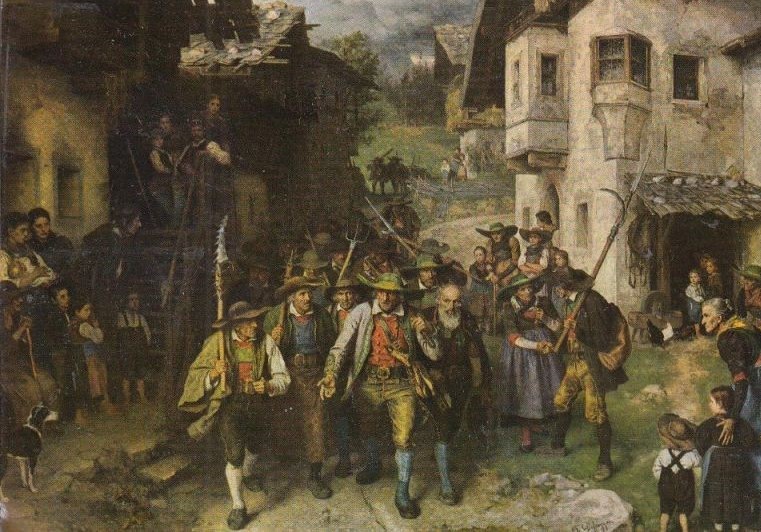 Das Letzte Aufgebot: the last Call to Arms of Andreas Hofer, in the year 1809, the Anno Neun of the Tyrol.

The sturdy, highland peasants go off to fight and die, for the last time, for God, for Emperor, for the Catholic Faith, each one consecrated to the SACRED HEART of Jesus. Like the Catholic Vendeans, they wore the SACRED HEART symbol and tied their Rosaries to their jackets. Heil die Berge – Sankt Sud-Tirol! All hail the Mountains – Holy South Tyrol! 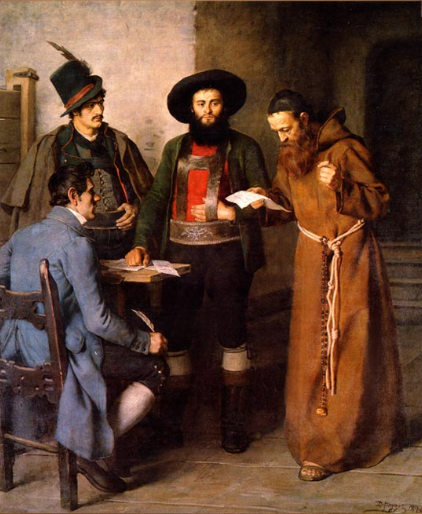 Haspinger, being a priest, did not carry arms but he did carry a stout stick which he used to good effect as he led many charges in battle against the French revolutionaries!

Here is a film clip from a German-language film entitled “1809 Andreas Hofer: the Freedom of the Eagles”, starting with Fr Haspinger warning his flock against the revolutionary secularism of Bonaparte and the French Revolution and ending with the show trial and murderous execution of the SACRED HEART-consecrated Hofer by the French revolutionary soldiers of Bonaparte:

And here is a Tyrolean hymn to the SACRED HEART:

Here is a song of Andreas Hofer called “Ach Himmel, es ist verspielt” (“Oh heaven! It is all played out!”)

The last verse is as follows:

In thee I place my trust

Thou beloved Maid, I pray,

Forsake your servant* not!

[*Literally the “Sandwirt” - Sandhof Inn-keeper- as he was known, the Tyrolean innkeepers all being known by the name of their Inn]

And finally, the Tyrolean national Hymn (Tirolerlandeshymne), the Song of Andreas Hofer (note the strong objection to being part of secularist, nationalist Italy):

Here is the wonderful inscription on the tomb and memorial of Hofer’s lieutenant, Josef Speckbacher (seen in the picture above with Hofer and Haspinger):

In battle fierce, yet nonetheless humane,

In peace, a quiet, law-abiding dove,

He was, as fighter, vassal and as man,

Right worthy both of honour and of love. 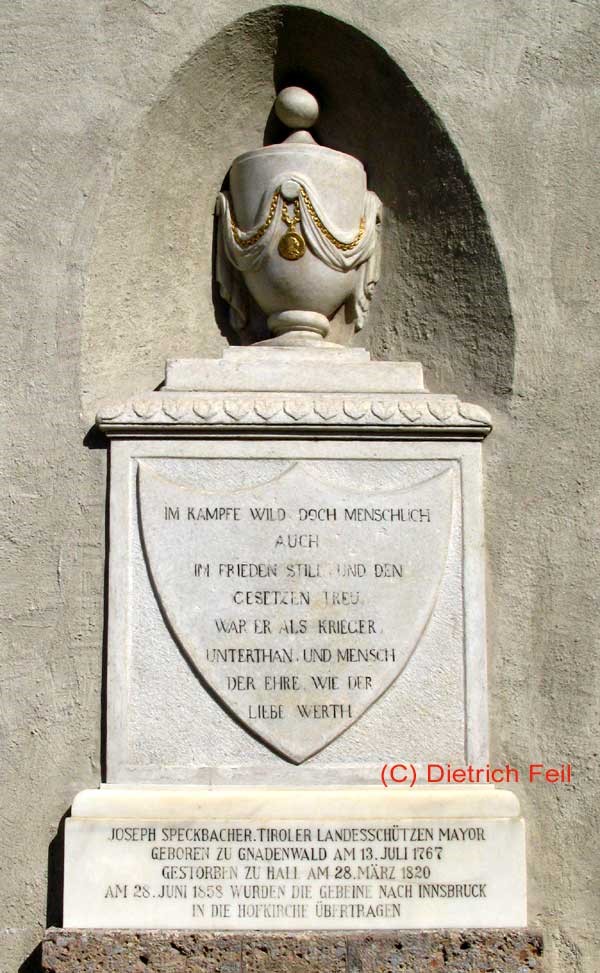 By profession a gamekeeper, he was one of the leaders of the Tyrolean rising against the compulsory secularisation of the Tyrol by Napoleon Bonaparte. Speckbacher, too, consecrated himself to the SACRED HEART of Jesus. He died on 28 March 1820 in Hall-in-Tyrol, but, on 28 June 1858, his remains were transferred to the Hofkirche in Innsbruck, where his chief, Andreas Hofer is buried. 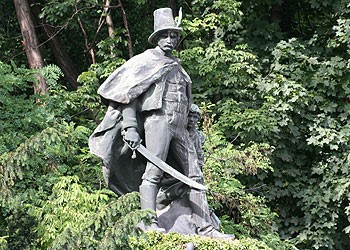 Memorial of Josef Speckbacher in Hall in Tyrol.

The Emperor’s brother, his Imperial and Royal Highness the Archduke Johann of Austria, lovable and loyal, a wonderful, devout Catholic and the best of men, was such a devoted partisan of the Holy Tyrol that he gave every support to Andreas Hofer and his uprising, constantly urging his cause upon his brother the Holy Roman Emperor Franz II, and even morganatically married a Tyrolean, Anna Plochl, the daughter of a humble postmaster, thereby disqualifying his descendants from ever inheriting the Imperial throne. Their children were, however, given the title of Counts of Meran and the family subsists to this day.

Below are 3 portraits of Archduke Johann[1] as a youth, in his prime and in later life: 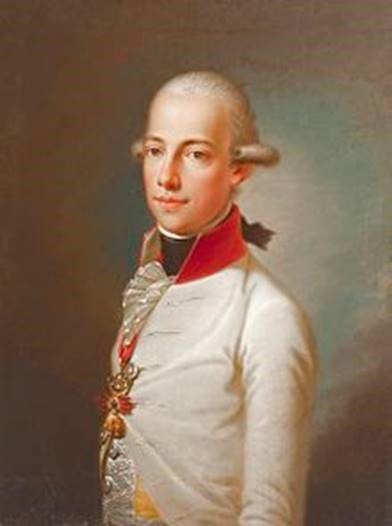 HIRH the Archduke Johann as a youth 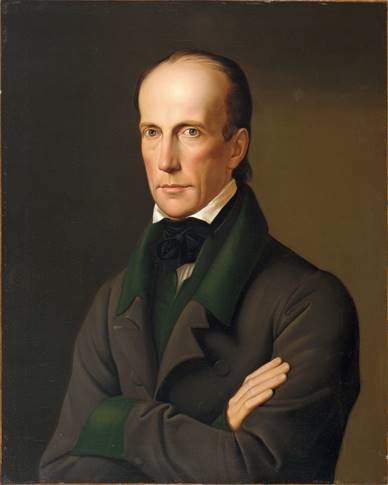 HIRH the Archduke Johann in his prime, when he morganatically married Anna Plochl, the daughter of a Tyrolean postmaster 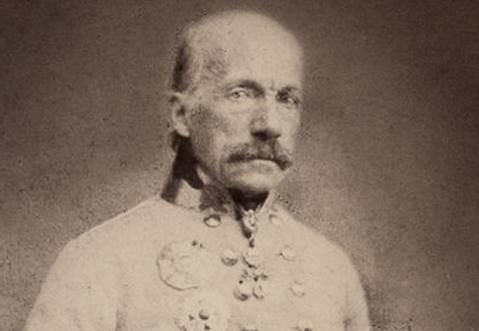 HIRH the Archduke Johann in later life,
in the uniform of an Austrian Field Marshal

The tomb of Andreas Hofer, is to be found in the Imperial Hofkirche (the Court Church) in Innsbruck, appropriately close to the imperial sarcophagus of the Holy Roman Emperor, Kaiser Maximilian I.

It was this Kaiser (which, of course, means “Caesar”) who, in 1342, granted the Tirolerfreiheitsbrief (Tyrolean Freedom Brief) to the intensely loyal, and fervently Catholic, Tyroleans, formally confirming their right to no taxation or conscription without their representative consent, 500 years before the British thought they had invented the idea and 700 years before the Americans clamoured for it.

For those who want the real thing, only the Catholic religion will do….. 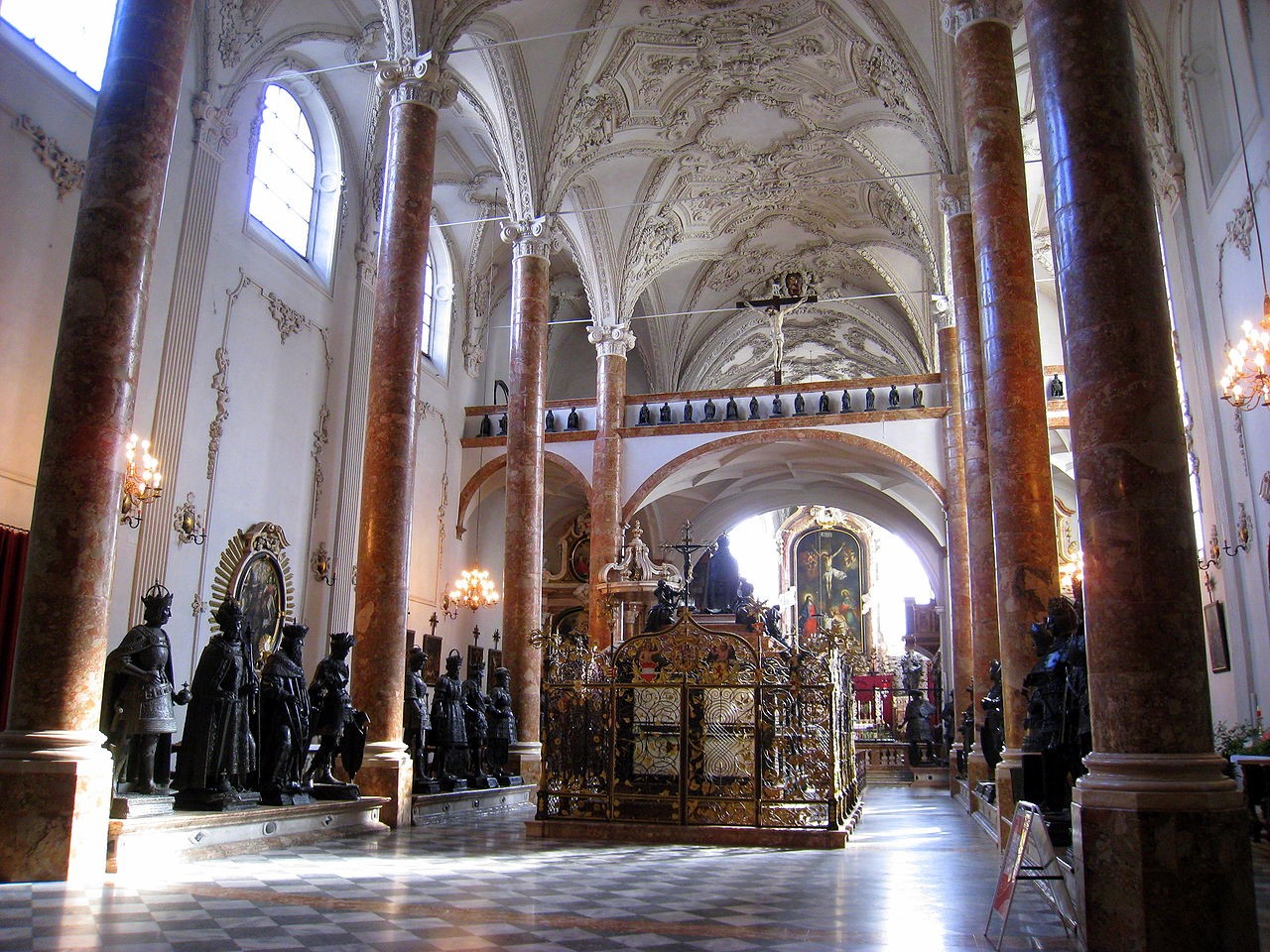 Tomb of Kaiser Maximilian I, the Holy Roman Emperor,
in the Imperial Hofkirche, in Innsbruck, Austria, one of the many magnificent wonders of the Catholic world. The tomb of Andreas Hofer is to the left but out of sight in this photo.

Colonel James Bogle is a barrister (trial attorney) and author of A Heart for Europe.

[1] Those interested in genealogy may like to know that the descendants of HIRH the Archduke Johann of Austria thrive to this day.

They were given the title “the Counts of Meran” (Meran is a town in the high Tyrol) by his brother, the Kaiser Franz II, the last Holy Roman Emperor, later Kaiser Franz I of Austria, the Austrian Empire being formed from the rump of the old Holy Empire, the 1,000 year old Catholic empire forced into dissolution by the Antichrist Napoleon Bonaparte, destroyer of Catholic Christendom.

The Schwarzenberg family are one of the great and ancient families of Catholic Europe.

Max von Meran was a bank director and lived in 1976 at Schloss Freudenberg, Pischeldorf, Austria.

[Comment Guidelines - Click to view]
The Remnant values the comments and input of our visitors. It’s no secret, however, that trolls exist, and trolls can do a lot of damage to a brand. Therefore, our comments are heavily monitored 24/7 by Remnant moderators around the country.  They have been instructed to remove demeaning, hostile, needlessly combative, racist, Christophobic comments, and streams not related to the storyline. Multiple comments from one person under a story are also discouraged. Capitalized sentences or comments will be removed (Internet shouting).
The Remnant comments sections are not designed for frequent personal blogging, on-going debates or theological or other disputes between commenters. Please understand that we pay our writers to defend The Remnant’s editorial positions. We thus acknowledge no moral obligation whatsoever to allow anyone and everyone to try to undermine our editorial policy and create a general nuisance on our website.  Therefore, Remnant moderators reserve the right to edit or remove comments, and comments do not necessarily represent the views of The Remnant.
back to top
Last modified on Thursday, January 9, 2020
Tweet
More in this category: « VANGUARD OF THE REVOLUTION: The Global Idea of the Communist Party No Creed? No surprises in NuChurch! »