Dear Cardinals and Bishops, do you really want a Church like this? 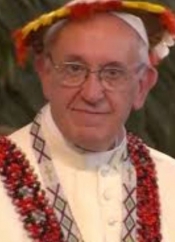 "Will the bishops, successors of the Apostles be silent? Will the cardinals, the Pope’s advisors in the governing of the Church be silent, in the face of this political-religious manifesto which perverts the doctrine and praxis of the Mystical Body of Christ? " - R. De Mattei (www.lepantofoundation.org)

The first reactions in response to the Instrumentum Laboris for the Amazon Synod were focused on its opening to married priests and the insertion of women into the sacramental orders of the Church. But the Instrumentum Laboris is something more: it’s a manifesto for liberation eco-theology which proposes a pantheist, egalitarian "cosmo-vision", unacceptable for a Catholic. The gates of the Magisterim, as José Antonio Ureta, rightly highlighted, are being thrown wide open "to Indian Theology and Ecotheology, two Latin American derivatives of Liberation Theology. After the collapse of the USSR and the failure of "real socialism", the advocates of Liberation Theology (LT), on the Marxist style, attributed the historic role of revolutionary force to indigenous peoples and to nature".*

In the document, published by the Holy See on June 17, the Amazon "bursts" into the life of the Church like a "new entity" (n.2). But what is the Amazon? It is not only a physical place and a "complex biosphere" (n.10) but also "a reality full of life and wisdom" (n.5), which ascends to a conceptual paradigm and calls us to a "pastoral, ecological and synodal" conversion (n.5). In order to carry out its prophetic role, the Church must heed "the Amazon peoples" (n.7). These people are able to live in "intercommunication" with the entire cosmos (n.12), but their rights are threatened by the economic interests of the multinationals, which, as the natives of Guaviare (Colombia) say "have slashed the veins of our Mother Earth" (n.17).

The Church listens to the "cry, of  both the people and the earth (n.18), because in the Amazon "the land is a theological place by which the faith is lived. It is also a unique source of God’s revelation" (n.19). So then, a third source of Revelation has been added to Holy Scripture and Tradition: the Amazon, the land where "everything is connected" (n.20), everything is "constitutively related, forming a vital whole" (n.21). In the Amazon, the ideal of Communism is fulfilled, given that, in tribal collectivism, "everything is shared and private spaces – typical of modernity – are minimal."

The native peoples have been liberated from monotheism and have restored animism and polytheism. Indeed, as is written in no. 25: "the life of the Amazonian community has not yet been influenced by Western civilization. This is reflected in the beliefs and rites regarding the action of spirits and the divinity – named in many different ways – with and in the territory, with and in relation to nature. This cosmo-vision is picked up in Francis’s ‘mantra’: "everything is connected" (LS 16, 91, 117, 138, 240)». 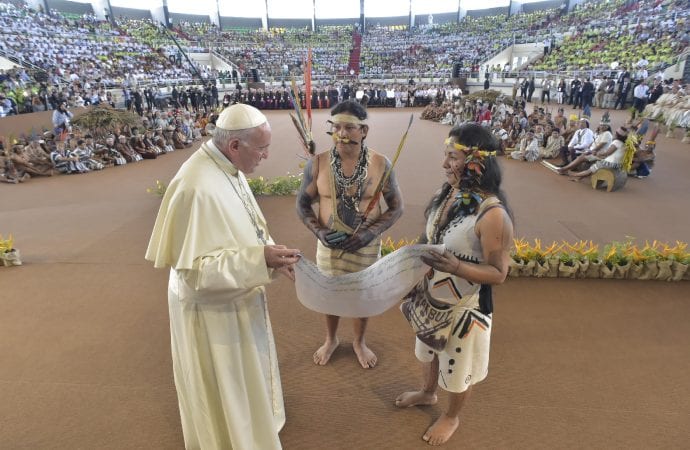 Pope Francis arrives in a coliseum in Puerto Maldonado, the city considered a gateway to the Amazon in the Madre de Dios province, Peru, to meet with several thousand indigenous people on the first full day of the pontiff's visit to Peru, Friday, Jan. 19, 2018. (Credit: L'Osservatore Romano Vatican Media/Pool Photo via AP.)

The document insists on asserting that the Amazonian "cosmo-vision" encompasses an "ancestral wisdom, a living reservoir of spirituality and native culture (n. 26). So, "the native people of the Amazon have much to teach us(…). The new paths of evangelization must be constructed in dialogue with these ancestral wisdoms in which the seeds of the Word are manifested" (n.29).

The wealth of the Amazon [then] is in not being monoculture, but of being "a multiethnic, multicultural and multi-religious world" (n.36) with which we need to dialogue. The peoples of the Amazon, "remind us of the past and the wounds inflicted during long periods of colonization. For this Pope Francis has asked  ‘humbly for forgiveness, not only for the offences of his own Church, but for the crimes against the native populations during the so-called conquest of America’. In the past the Church has at times been an accomplice of the colonizers and this has suffocated the prophetic voice of the Gospel" (n.38).

"Integral ecology" includes "the transmission of the ancestral experience of cosmologies, of spiritualities and theologies of the indigenous peoples, in the care of our Common Home" (n.50). "In their ancestral wisdom – these peoples- have cultivated the conviction that all creation is connected, that it deserves our respect and our responsibility. The Amazonian culture, which integrates human beings with nature, becomes a point of reference for the construction of a new paradigm of integral ecology" (n.56).

The Church must divest itself of its Roman identity and adopt "an Amazonian face". "The Amazonian face of the Church finds its expression in the plurality of its peoples, cultures and ecosystems. This diversity requires an option for an outward-bound and missionary Church, incarnated in all its activities, expressions and languages" (n.107). "A Church with an Amazonian face in its multiple nuances, seeks to be an "outward-bound" Church (cf. EG 20-23), which leaves behind a colonial mono-cultural, clerical and domineering tradition and knows how to discern and adopt without fear, the diverse cultural expressions of the peoples" (n.110).

The pantheist spirit animating Amazonian nature is a leitmotif of the document. "The Creator Spirit which fills the universe (cf. Wisdom 1,7) is the Spirit that for centuries has nurtured the spirituality of these peoples even before the proclaiming of the Gospel and spurs them onto accepting it, from the base of their [own] cultures and traditions"(n.120). Hence, "we need to grasp what the Spirit of the Lord has taught these peoples over the course of the centuries: faith in God, Father-Mother-Creator; the sense of communion and harmony with the earth; the sense of solidarity with their fellow-man; the project of "living well"; the wisdom of a thousand-year old civilization the elders possess and which has effects on the health, cohabitation, education and cultivation of the land; the relationship with nature and Mother Earth; the capacity of resistance and resilience of the women in particular; the religious rites expressed; the relations with their forbearers; their contemplative stance and sense of gratuity;  the celebration and festivity and the sacred sense of the land" (121).

Again, in the light of a "healthy decentralization" of the Church, "the communities ask that the Episcopal Conferences adapt the Eucharistic Rite to their culture". "The Church needs to be incarnated in the Amazonian cultures which possess a great sense of community, equality and solidarity, thus clericalism is not accepted in its various forms of manifestation.  The indigenous peoples possess a rich tradition of  social organization, where authority is in rotation and has a profound sense of service.  On the basis of this experience in organization, it would be opportune to reconsider the idea that the exercise in jurisdiction (power of government) must be connected in all spheres (sacramental, judiciary, administrative) and in a permanent way to the Sacrament of Holy Orders" (n.127).

On the basis of the premise that "celibacy is a gift for the Church" a request is being made that "for the most remote zones in the region, a study be made about the possibility of priestly ordination for elderly people, preferably natives, respected and accepted in their communities - even if they may have already a constituted and stable family - as a means of guaranteeing the Sacraments which accompany and sustain Christian life" (n.129). Furthermore, we need "to guarantee leadership to the women, along with more extensive and relevant spaces in the field of formation: theology, catechesis, liturgy and schools of faith and politics" and "identify the type of official  ministry  that can be conferred on women, keeping in mind the central role they play today in the Amazonian Church."

What more can be added?  Will the bishops, successors of the Apostles be silent? Will the cardinals, the Pope’s advisors in the governing of the Church be silent, in the face of this political-religious manifesto which perverts the doctrine and praxis of the Mystical Body of Christ?

[Comment Guidelines - Click to view]
The Remnant values the comments and input of our visitors. It’s no secret, however, that trolls exist, and trolls can do a lot of damage to a brand. Therefore, our comments are heavily monitored 24/7 by Remnant moderators around the country.  They have been instructed to remove demeaning, hostile, needlessly combative, racist, Christophobic comments, and streams not related to the storyline. Multiple comments from one person under a story are also discouraged. Capitalized sentences or comments will be removed (Internet shouting).
The Remnant comments sections are not designed for frequent personal blogging, on-going debates or theological or other disputes between commenters. Please understand that we pay our writers to defend The Remnant’s editorial positions. We thus acknowledge no moral obligation whatsoever to allow anyone and everyone to try to undermine our editorial policy and create a general nuisance on our website.  Therefore, Remnant moderators reserve the right to edit or remove comments, and comments do not necessarily represent the views of The Remnant.
back to top
Last modified on Tuesday, June 25, 2019
Tweet
More in this category: « OUT and PROUD: Italian Catho-Communism and the Correction of False Categories Australian Christian Rugby Player Fights for Religious Freedom »