Gigantification: How We Stupidified Ourselves

In every area of life in which we're doing insanely stupid and self-destructive things, it seems that the main cause of our increased stupidity has been the sudden introduction in the last century and a half of technologies that are intended to make things "easier". Mechanisation and the introduction of artificial fertilisers was supposed to make farming easier. And for a while it did. We solved the food problem, at least mostly, and for a certain value of "solved".

Now if we have a famine it mostly happens in places where the natural, social and political structures supporting agriculture are more fragile (Africa) and where political upheavals, that ancient cause of famine, have made transport of food in difficult times - eg: prolonged drought - impossible. In other words, a place like Ethiopia already has enough climate, soil and water issues for farmers to deal with; add a civil war and unscrupulous political criminals, gangs of thugs kidnapping children to be soldiers, and you've overwhelmed the system, given it more to deal with than it can handle, and it collapses. The huge movements of Ethiopians into refugee camps for famine relief that we all remember from the mid-80s turned out not to be so much a problem of not enough food, but the disruption of agriculture and transport systems by warlords – who, by the way, stole much of what was sent by us western do-gooders.

But that damn law of unintended consequences...

We're starting to see some insidious and accelerating problems with the way we do our mass, mechanised food production, and depletion of soil fertility is probably the biggest. The move to more Bigness in every area of human endeavour, the Gigantification of life - globalisation this, mass production that, mechanisation the other thing - has created a whole set of problems that no one seems to have any bright ideas to solve. And they're going to get worse the more we re-engineer our society to fit the needs of the machines.

Noteworthy: after things settled down after the "fall" of the Roman Empire, there were few serious or prolonged famines in European history (though we went through a bad patch in the 12th century it seems) before the advent of complex (and hugely expensive) steam or gasoline-powered farm machinery and artificial fertilisers/pest/herbicides. The famines we did have were mostly due to the same things that cause famines today: extreme weather events we have no control over – strings of very dry winters or a few years of late frosts or too-cold or too-dry growing seasons – combined with the disruption of agriculture and transport by wars. (William the Conquerer created an artificial famine to drive the Danes out of the north of England by burning farms.) It was never lack of knowledge of the land or how to grow food. Medieval peasants, far from being ignorant muck-rakers, knew what they were about. Their descendants in Italy - the contadini - still know that stuff. 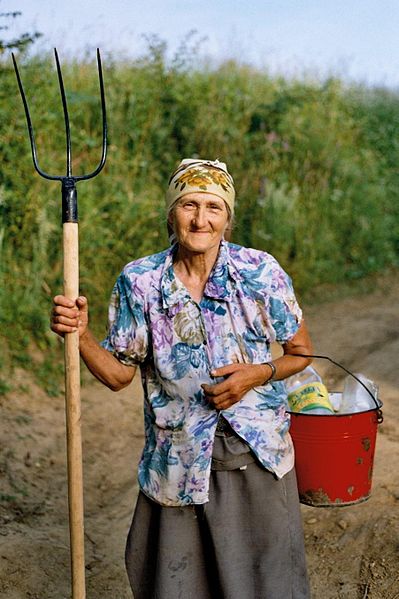 My landlady, Annamaria, is a contadina with deep, deep roots in this place. She has been teaching me all the contadina things. She’s taught me what time to plant what, and how the phases of the moon can guide your planting and harvesting. When and how to prune grape vines, fig, plum and pear trees. What kind of carrots you can grow in clay soil (short stubby ones). Today I wanted to clip my grass but discovered my hedge trimmers were busted. She took one look, took them into her big magical garage-of-all-things and ten minutes later handed me my trimmers back in full working order.

But it seems that since the advent of mechanised farming (mass-production of food on the huge scale you see in North America) we've straight-up forgotten the small intimate details of how to do anything. All that about soil management and all the little things that made medieval agriculture work is all gone. Who needs to think about replenishing natural soil nutrients or maintaining the substructure if you've got machines and bags of fertiliser, amirite?

And that doesn't even get into the problems we've created in the loss of diversity in food plant varieties. One of the first things you notice when you come to Italy is that they eat here a much wider range of fruit and vegetables than you'd ever find in an Anglo supermarket in the US, Canada or Britain. It's normal for Italians to grow their own salads, and they all know there are a dozen different kinds of lettuce and salad-things. How many North American shoppers know that there are hundreds of different kinds of brassicas? We eat broccoli and cauliflower - and only one type of each, and, perhaps more importantly, have no idea that there are other things.

When you come to Italy you have to learn what are (and how to cook, and whether you like) bietole, cime di rapa, cicoria, Romanesco broccoli or cavolfiori rosso, (it's cauliflower, but it's purple!). The dozen-odd different kinds of leafy veg the Italians eat all narrow down, in Angloland, to... spinach. And the same kind of spinach for everyone from coast to coast. Funny isn’t it, that the Gigantification of production has resulted in the ensmallifying of everything produced.

The Gigantification of life, the doing of everything on a massive and unimaginably distant scale, is all said to be in aid of "saving us labour." But what have we saved all this labour for? So we can live in suburbs and drive cars to go work at a desk doing something that has nothing whatever to do with our own life. So we can forget how do to anything ourselves? It may have saved us all labour but it has also left us with nothing Real to do. What are we saving our labour for? What do most of us do with the time we don't spend weeding a kitchen garden or making beer or milking cows? Have we separated ourselves from the sources of our life only so we can spend more time watching TV? Scrolling Facebook? Arguing for hours over nothing on Twitter? Are we holier? More learned? More enlightened? Do we write poetry and play music? Do we even know any poetry?

It certainly does mean that you don't have to make your own socks or grow anything yourself, or really do much of anything. But why is this a good thing? Everything is now done for you on this titanic scale and at unimaginable distances from your house or flat. But the result is that now, not only does no one know how to knit a sock or grow a cabbage, we don't know even how to darn a sock or cook a cabbage.

And of course, though we may not have noticed, the whole thing takes all decisions about the details of our day to day life out of our hands. We can't decide today to have bietole and cavolo nero for dinner because someone else, someone we will never meet, has decided for us that these things will never be grown on the Monsanto-Giganto-farm, or ever appear in our shops.

No one complains that there are so few different kinds of things to eat because no one remembers a time when there was anything in the shops but one kind of broccoli and one kind of cauliflower. How many different varieties of apple can you name in fifteen seconds? Did you know that there used to be hundreds of different kinds of apples? And that everyone used to know them? One of the things that has come from Gigantification has been a mass-forgetting, the memory-holing of life, the diminution and impoverishment of a great richness and variety in life and experience that has all been mechanised and mass-produced away. So we can commute to work.

The Gigantification of production, of everything we need or use in life, has made us careless, forgetful, lazy and bored - stupid, in other words - because it's easier. We bought into it all because it's easier to buy a pair of socks made in China than to knit by the fireside. We only eat the one kind of broccoli that MassoGigantoFarmCorp allows us to buy because we have forgotten that food isn't some magical thing provided by far-away, unseen, unknowable powers. Food doesn't come from Monsanto or the government. It comes out of the ground if you plant a seed.

It just seems that every time we change things from doing things at the micro level - that is, the local, and manageable by ordinary people with regular means - to the macro level - things on such a huge scale they can be done only by governments or huge corporations with enormous national-scale resources - we render ourselves functionally helpless and dependent on systems we have no control over. And we create terrible, growing problems that we can't solve, except by doing more of the huge-scale things that caused the problems in the first place.

All this stuff about natural preservation and use of soil was known to farmers of the Middle Ages and before, and has since largely been forgotten. It's a funny thing that in so many important ways we've become much, much stupider since the "Enlightenment." It's part of the function of the Enstupidment that we don't know how much we've forgotten. We've forgotten that we ever knew it.

I recently asked someone what "distributism" really means. In brief, I think it mostly means this:

It means the re-ensmallification of life. The rejection of Gigantification. It's knitting a sock, or even darning a sock. It's growing a cabbage and cooking and eating it. Or at least knowing how.

[Comment Guidelines - Click to view]
The Remnant values the comments and input of our visitors. It’s no secret, however, that trolls exist, and trolls can do a lot of damage to a brand. Therefore, our comments are heavily monitored 24/7 by Remnant moderators around the country.  They have been instructed to remove demeaning, hostile, needlessly combative, racist, Christophobic comments, and streams not related to the storyline. Multiple comments from one person under a story are also discouraged. Capitalized sentences or comments will be removed (Internet shouting).
The Remnant comments sections are not designed for frequent personal blogging, on-going debates or theological or other disputes between commenters. Please understand that we pay our writers to defend The Remnant’s editorial positions. We thus acknowledge no moral obligation whatsoever to allow anyone and everyone to try to undermine our editorial policy and create a general nuisance on our website.  Therefore, Remnant moderators reserve the right to edit or remove comments, and comments do not necessarily represent the views of The Remnant.
back to top
Last modified on Thursday, May 2, 2019
Tweet