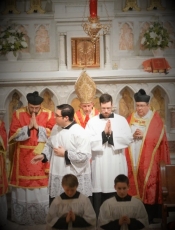 It’s been a good Sunday so far! For me, at least, and I hope for you, too, once we’re done here.

It began less-than-great, my mind filled with the rumors that Archbishop Viganò, still in hiding, is being hunted by Vatican mafia thugs. Please God, protect him.

I was up early to make an appointment, so I attended early Mass at the nearby FSSP chapel, despite usually attending the SSPX mission here in Oklahoma City. As the sermon began, I settled into the pew expecting the usual Gospel stuff. Yes, we need it, but it seems to me, that’s peacetime stuff.

The padre commanded the podium and launched us into the most riveting 20 minutes I’ve spent in quite some time: Bella Dodd, scandal, Viganò, Pope Francis… Fr. Simon Zurita hammered away at the current crisis and our part in it:

I resisted the impulse to clap, and spent the rest of Mass in thanksgiving for the clear direction I heard this morning. There was a newspaper in the vestibule which I grabbed on the way out.

Upon arriving home I glanced at it. Front and center was a diocesan priest’s take on the scandal.

His sincerity and heartbreak were palpable. I read every word. Here is a good priest who has been betrayed by his superiors and whose anger is surpassed only by his faith and concern for his parishioners:

“First, I want to apologize to the victims of horrific, soul-crushing abuse. I apologize to others who, upon learning of this disgusting matter, have their faith rocked and wonder if they can remain in the church.

…I’m angry that grave and horrific sin—be it abuse itself or coverups by leadership—harms the Church which is the Bride of Christ. I’m angry that this obscures the holiness proper to the Church because all we can see now is the sinfulness of humanity, not the presence of divinity in Christ’s Bride.

…The failed bishops speak like men who are not fathers because a father would be outraged and in deep pain for his children despicably harmed under his guard. Maybe some bishops have mustered that. Most of the ones getting the TV interviews certainly have not.”

Fr. Stephen Hamilton then reminds his faithful that the Church herself has policies and procedures in place to remedy such situations:

“Procedure? It’s called repentance! Policy? The sixth commandment and all that it means about sexual morality.”

Both priests—FSSP and diocesan--urged their flocks not to abandon the Bride of Christ. In the wake of a scandal of this nature and magnitude, a terrible stigma has been placed on the roman collar, and they are no less scandalized by the hierarchy than we are – and yet these fathers have the good of their faithful foremost in their minds, and speak like true shepherds.

The number of bishops calling for Archbishop Carlo Viganò’s charges of abuse and cover-up at the highest levels to be fully investigated is growing rapidly, and here's another bishop who has had enough:

Bishop Thomas John Paprocki is not a traditionalist--not yet, at any rate--but the crack in the great facade is now so wide that he cannot in good conscience ignore it. Papolatry--the great bane of the traditional Catholic counterrevolution--has also been dealt a mortal blow as far as this bishop and so many others are concerned.

Here's an excerpt from Bishop Paprocki's homily of September 2, 2018 which he instructed was to be read at all Weekend Masses in all the Churches of the Diocese of Springfield in Illinois:

“Now, with reference to the situation in our own country, the former Apostolic Nuncio to the United States, Archbishop Carlo Maria Viganò, has revealed a set of facts and circumstances that are deeply troubling as they relate to the awareness, actions, and inactions at the very highest levels of the Church. Archbishop Viganò has provided his written testimony stating that Pope Francis “must honestly state when he first learned about the crimes committed by McCarrick, who abused his authority with seminarians and priests. In any case, the Pope learned about it from me on June 23, 2013 and continued to cover for him.”

When asked about this aboard the papal plane on his return flight from Ireland on August 26, Pope Francis said, “Read the statement carefully and make your own judgment. I will not say a single word on this.”

Frankly, but with all due respect, that response is not adequate. Given the gravity of the content and implications of the former Nuncio’s statement, it is important for all the facts of this situation to be fully reviewed, vetted, and carefully considered. Toward that end, Pope Francis, Vatican officials and the current Apostolic Nuncio should make public the pertinent files indicating who knew what and when about Archbishop (formerly Cardinal) McCarrick and provide the accountability that the Holy Father has promised.”

This could be the beginning of what The Remnant has contended for years; that the infrastructure of the Catholic Church is still in place throughout the whole world, such that, with the grace of God, if the leaders of our Church would begin to think, pray and act Catholic again, the situation could begin to turn around overnight.

This must be why The Remnant supported Archbishop Lefebvre years ago, Cardinal Burke and Archbishop Viganò more recently—because hierarchs who speak out cause a ripple effect of orthodoxy just by the very act of speaking.

The Church is not a democracy. Bishops and priests who speak out against this mad revolution in the Church can and will change history.

Where it all goes from here is anyone's guess--but at least there's hope. At the very least we have good reason to support these clergymen, pray for them, and insist that others follow their lead.  It is to them that the faithful can begin to turn for direction in the face of this horrific scandal--RESIST!

This time the scandal’s too big to be ignored, and silence is precisely what perpetuates it.

So, thank God that these brave priests and bishops are raising their voices, because their presence means there is hope for the Church. She will right Herself through the dedication and sacrifice of her faithful sons and princes. If that means some righteous anger, God love them! Complacency and quietism accomplish nothing; change is born of discontent and fervor.

The lines have been drawn and the sides are forming. Those who have the will to fight should not be made to feel that they fight alone. The extent of this crisis is such that, with God's good grace, who knows how many of these bishops inside the establishment will have the scales removed from their eyes and begin to look more critically at the foundation of all this chaos, crisis and scandal: the so-called Spirit of Vatican II and the liturgical revolution which was spawned by that Spirit.

So, let’s fight! Let’s remain true to the Bride of Christ even through so much betrayal and heartbreak, and let’s not lose hope.

[Comment Guidelines - Click to view]
The Remnant values the comments and input of our visitors. It’s no secret, however, that trolls exist, and trolls can do a lot of damage to a brand. Therefore, our comments are heavily monitored 24/7 by Remnant moderators around the country.  They have been instructed to remove demeaning, hostile, needlessly combative, racist, Christophobic comments, and streams not related to the storyline. Multiple comments from one person under a story are also discouraged. Capitalized sentences or comments will be removed (Internet shouting).
The Remnant comments sections are not designed for frequent personal blogging, on-going debates or theological or other disputes between commenters. Please understand that we pay our writers to defend The Remnant’s editorial positions. We thus acknowledge no moral obligation whatsoever to allow anyone and everyone to try to undermine our editorial policy and create a general nuisance on our website.  Therefore, Remnant moderators reserve the right to edit or remove comments, and comments do not necessarily represent the views of The Remnant.
back to top
Last modified on Sunday, September 9, 2018
Tweet
More in this category: « How to End the Bergoglian Reign of Error Apologies, Holiness, but We’ll Be Washing Our Hair in February »