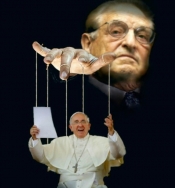 The dye was cast in the Tiber when Bergoglio stepped out on the loggia with his modernist St. Gallen mafia cabal. Francis went right to work—on the global agenda of George Soros.

At the start, Soros graciously dispatched reinforcements to carry out the battle plan:

In the first years of his reign, Francis surrounded himself with the loyal Soros army of ideologues, like Jeffrey Sachs, Joe Stiglitz, and Emma Bonino, to mention just a few. Francis opened up the vast Vatican resources and global papal platform to promote the Soros, UN, New World Order environmental agenda, reflected in Laudato Si.

Next up was the papal endorsement of the Paris Climate Treaty.

Next up was the Cuba detente using Vatican backdoor diplomatic channels.

Next up was Soros’ destruction of Europe through papal promotion of mass Muslim migration.

The loyal and obedient Soros papal servant carried out his globalist duties with sublime mercy and efficiency.

Now, Francis must address the really tough stuff of undoing and ditching dogma to ensure the realization of the one world religion which tops the Soros global check list.

Francis intends on undoing and rewriting 2000 years of Magisterium, Church Teaching, and the Catholic Catechism to please his master, George Soros.

The clever Bergoglio starts first with the easiest dogma to overturn, the teaching on the death penalty. Shrewdly, Francis announces his reversal on Church dogma on the death penalty while the Catholic world is distracted by the clergy sex abuse crisis, hoping that few will have the energy or attention to object to this papal Magisterium redo.

Time is running short for the 81-year-old Bergoglio. Look for the Soros reform to pick up the pace behind the Vatican walls. Next up, the October Synod on Young People in Rome which will serve as the papal platform to further justify and implement the demands of George Soros and his global elites.

The Vatican homosexual agenda and verbal grooming tactics are evident in the synodal working document, the Instrumentum Laboris, heavily cloaked in the psycho babble of accompaniment and dialogue. One sentence captures the covert manipulation employed by Francis, Synodal Cardinals Farrell and Baldisseri.

“Sociological studies show that many young Catholics do not follow Church teachings on sexual morals. No Bishop Conference gives solutions or prescriptions, but many believe that the sexual question must be discussed in a more open and unbiased way.” §53 IL

Do you see the not-so-subtle ideological shift underway in this modernist manifesto? The kids want us to be more open and unbiased. Sounds like the Instrumentum is suggesting that Catholic teaching makes us haters.

Francis and his bishops already skewered the youth survey to serve their leftist agenda. Can you hear him propound from the Papal Chair that the youth want us to be more merciful, open, and engaged in dialogue? We must accompany the youth on their journey.

The Church of Thomas Aquinas has devolved into the prissy and superficial dialogue of I’m OK, you’re OK.

Rest assured, Francis will ascribe to the youth, as the primary justification to change Church teaching on homosexuality. This is crass theological exploitation under the guise of some phony synodal survey. Francis operates in the political and secular world, using focus groups, youtube videos and polling to redefine dogma.

How ironic that this papacy presently awash in homosexual sex abuse scandals is so skilled at exploiting youth and diverting attention. How ironic that in the midst of a homosexual clerical scandal of epic proportions, the Synod on the Youth will attempt to advance a homosexual agenda.

Make no mistake: As the hierarchy exploited and abused the bodies of Catholic youth, they are now grooming the youth in this upcoming Synod as rationalization and justification to “modernize” and embed the radical homosexual ideology by incorporating it into Church dogma. The Synodal Bishops will argue that we must listen to the youth and accompany them as they explore a more open and merciful inclusion of homosexuality. After all, the youth are open, the adults are not.

The Synod on the Youth will unveil more sex changes than Bruce/Caitlyn Jenner. We’ve seen the Francis synodal manipulation before with the 2014-15 Synods on the Family and his sneaky footnote sleight of hand in Amoris Laetitia. The Synodal Leaders, Cardinals Farrell and Baldisseri are tasked to ensure the completion of the Soros globalists’ gender-bending worldly ambitions in the final Synodal document.

Cardinals Baldisseri and Farrell argue for a modernizing of Church teaching in the hopes that homosexual youth will be “close” to the Church. Not a very comforting thought in the dark days of McCarrick:

“Some LGBT youths, through various contributions that were received by the General Secretariat of the Synod, wish to benefit from greater closeness and experience greater care by the Church, while some Bishop Conferences ask themselves what to suggest to young people who decide to create homosexual instead of heterosexual couples and, above all, would like to be close to the Church.” §197 IL

The Synod will exploit the inexperience and innocence of the youth to promote the next radical Soros tenet of global homosexual advocacy. As they shamelessly exploited youth in sacristies and seminaries, the Vatican will brazenly take advantage and groom the youth on the Synodal stage for Francis’ merciful embrace of the homosexual political agenda. Who am I to judge gets embedded into dogma.

The promotion of homosexual strategy abounds in the trite and superficial 34,000 word Instrumentum Laboris which reads like ramblings from a Hollywood New Age priestess. Don’t be fooled by its dense nothingness. It’s very dangerous.

Ted McCarrick would be pleased.

Stop the Synod on the Youth before its too late.

[Comment Guidelines - Click to view]
The Remnant values the comments and input of our visitors. It’s no secret, however, that trolls exist, and trolls can do a lot of damage to a brand. Therefore, our comments are heavily monitored 24/7 by Remnant moderators around the country.  They have been instructed to remove demeaning, hostile, needlessly combative, racist, Christophobic comments, and streams not related to the storyline. Multiple comments from one person under a story are also discouraged. Capitalized sentences or comments will be removed (Internet shouting).
The Remnant comments sections are not designed for frequent personal blogging, on-going debates or theological or other disputes between commenters. Please understand that we pay our writers to defend The Remnant’s editorial positions. We thus acknowledge no moral obligation whatsoever to allow anyone and everyone to try to undermine our editorial policy and create a general nuisance on our website.  Therefore, Remnant moderators reserve the right to edit or remove comments, and comments do not necessarily represent the views of The Remnant.
back to top
Read 9069 times Last modified on Saturday, August 4, 2018
Tweet

More in this category: « Cardinal Maradiaga: Enabler of Monsters Follow the Bouncing Catechism »