Author’s Note: This article was originally written in May of 2015. It is especially relevant now in light of Vice Pope Cardinal Maradiaga’s outrageous comments regarding the 48 Honduras Seminarians who wrote a letter protesting against what they say is a widespread and entrenched pattern of homosexual practice in Tegucigalpa’s major seminary.

Honduras Cardinal Maradiaga instead accused the seminarians of being “gossipers” and called them “weeds and evil.”

Catholics should demand the resignation of Cardinal Maradiaga and fully support the “Honduras 48.”

This article highlights the dangerous attitudes by the second highest prelate in the Vatican. Many call him the Pope’s closest confidante. –Liz Yore 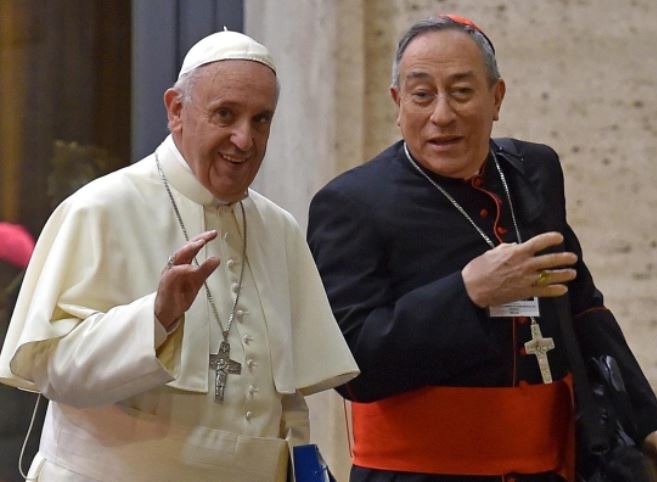 Maradiaga calls Pope Francis his “friend and brother” who evangelizes with “encyclicals of gestures,” which speak louder than words and texts.

In 2002, in an interview with the Italian Catholic Magazine, 30 Giorni, at the height of the U.S. clergy child sex abuse scandal Cardinal Rodriguez Maradiaga blamed the coverage of the clergy crisis on the Jewish media for a bias against the Catholic Church. Maradiaga suggested that the Jewish media obsession with the sexual scandals was prompted by the Catholic Church receiving Arafat and calling for the creation of a Palestinian state

"The Cardinal’s odious anti-Jewish conspiracy theory must be immediately and forcefully condemned by responsible voices in the Catholic Church," said Abraham H. Foxman, ADL National Director, in a letter sent to Cardinal Walter Kasper, of the Pontifical Commission for Religious Relations with Jews. "We are outraged by Cardinal Rodriguez Maradiaga’s implication and, as John L. Allen, Jr. states in the July 19th Catholic Reporter, ‘the logic of his comments seems clear: Someone in America doesn’t like the pro-Palestinian tilt of the Catholic Church and used their media clout to deliver payback. It’s not much of a reach to imagine who Rodriguez might suspect that ‘someone’ to be.’"

John Allen, in his book All the Pope’s Men: the Inside Story how the Vatican Really Thinks relays the following conversation between Abraham H. Foxman, ADL National Director and Cardinal Oscar Rodriguez Maradiaga, ADL explained to the Cardinal that his comments were offensive because they perpetuated an anti-Semitic conspiracy theory about Jewish control of the media. The Cardinal apologized, said he never meant his remarks to be taken that way, and indicated that he would never say it again.

The July 31 Print Edition of The Remnant Newspaper is in the mail.
Preview the issue HERE!

Nevertheless, Maradiaga goes on to say, “Pedophilia is an illness, and it is just that whoever has it should leave the priesthood. But the accusations must always be proved with a just process, and without persecution from the civil authorities, which is what is actually happening.” Maradiaga focuses his abundance of mercy on the pedophile perpetrators.

The Vice Pope incredibly states, “We must ask, where is Jesus in all this? For me it would be a tragedy to reduce the role of a pastor to that of a cop. We are totally different, and I’d be prepared to go to jail rather than harm one of my priests. I say this with great clarity.”

There is no mistaking the clarity and intent of Vice Pope Maradiaga about the vice of the sexual abuse of minors by clergy. His candid and alarming beliefs about not harming one of his priests by reporting them to law enforcement authorities although a legal requirement in all jurisdictions in the United States. Maradiaga seems far more concerned about the harm of punishment done to his priests who abuse children than the severe harm and trauma suffered by a child who loses his innocence and faith at the hands of a Catholic priest.

Maradiaga continues his defense of abuser priests, sounding a ‘who am I to judge’ theme:

“We can judge the exterior facts, but not the interior life of the person. We must always have a pastoral, Christian attitude.”

“We, bishops must not forget that we are merciful pastors and not agents of the FBI or CIA.”

This is the calamity of “Who am I to Judge?”

This is the Merciful Francis Papacy?

Apparently, this was the merciful stance taken toward McCarrick the Molester by his brother prelates.

Mercy for their clerical brethren, but not for the innocent children? 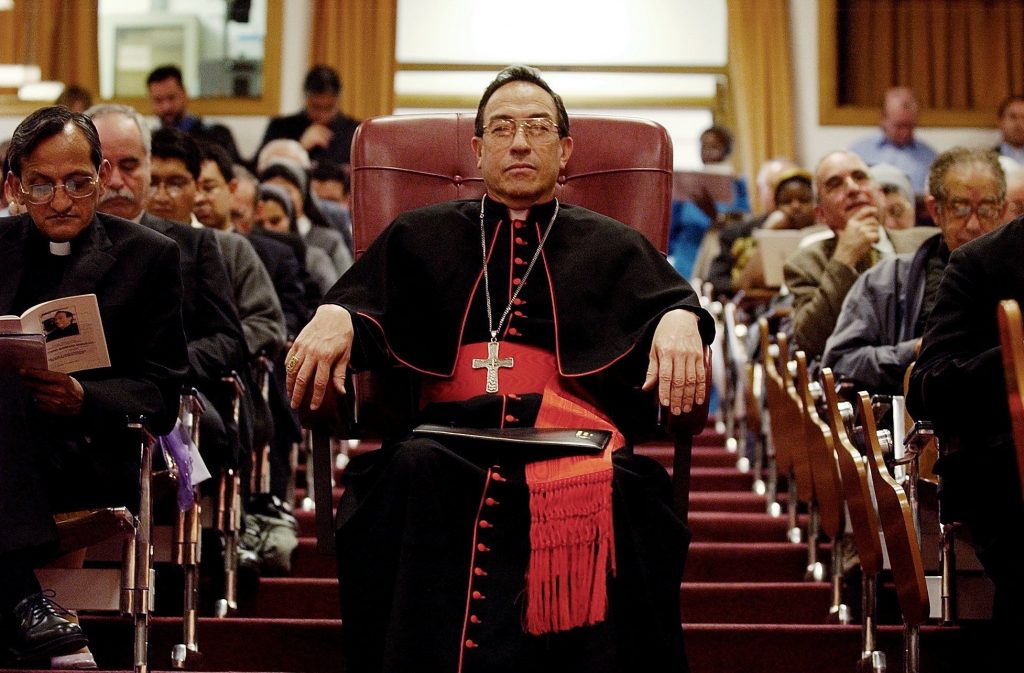 Maradiaga’s rant continued during a May 16, 2002, press conference, when he questioned the motivations of the clergy abuse victims. “I have my doubts about the motivation behind these scandals. “Obviously someone who has the sickness of pedophilia should not be in the priesthood. But why bring up these things now from 40 or 30 years ago? Why is it that they bring these skeletons out of the closet?” “We know well that every time money mixes with justice it becomes unjust.” The Vice Pope doesn’t seem to comprehend that children who are sexually abused by priests are terrorized into silence and shame for decades. The predator priest often threatens his victims that no one will believe them. For decades, victims don’t disclose and live with the guilt of the abuse and its devastating life consequences.

During his tirade about the U.S. clergy abuse scandal, Cardinal Maradiaga remarked, “We must always ask how Jesus would conduct himself.” or “Where is Jesus in all of this?”

Jesus spoke with marked clarity and stinging rebuke on this subject and didn’t seem concerned at all about treating predators with mercy.

In July of 2003, Rodriguez was again asked about his opinions on the Catholic clergy scandal. “I don’t repent.” “Maybe I was a little strong, but sometimes it’s necessary to shake things up.”

Well, thanks to Uncle Ted McCarrick, the laity are now shaking things up now.

Francis “talks tough” on clergy abuse, but his papacy is awash in sex abuse scandals by his chosen favorites. The SNAP assessment of his utter failure to address clergy sex abuse while Cardinal of Buenos Aires, suggests that he and his Vice Pope share the Latin American view of mercy for predators.

In the same May 2001 interview, Maradiaga criticized the U.S. judicial civil system of depositions as recalling, “the most dark times of Stalinist processes against churchmen in Eastern Europe.” According to Maradiaga, Boston Cardinal Law was “persecuted” by the press.

The American judicial system that Cardinal Maradiaga scorns so contemptuously uncovered a massive cover up by Church officials of devastating sexual abuse of minors at the hands of predator priests. But for the legal system and the media, innocent victims who carried the horrendous burden and shame of their secret terror at the hands of clergy would remain forever silent. The truth was uncovered and countless children were saved from further abuse at the hands of these protected criminal predators.

That’s justice, American style. It’s not quite a millstone around the neck of the predator who is thrown in the depths of the sea, as Jesus advises, but it’s nonetheless true mercy and justice for the innocent victims.

On the footsteps of McCarrick’s resignation, Cardinal Maradiaga should be the next Cardinal shown the door.

It’s time to shake things up.

[Comment Guidelines - Click to view]
The Remnant values the comments and input of our visitors. It’s no secret, however, that trolls exist, and trolls can do a lot of damage to a brand. Therefore, our comments are heavily monitored 24/7 by Remnant moderators around the country.  They have been instructed to remove demeaning, hostile, needlessly combative, racist, Christophobic comments, and streams not related to the storyline. Multiple comments from one person under a story are also discouraged. Capitalized sentences or comments will be removed (Internet shouting).
The Remnant comments sections are not designed for frequent personal blogging, on-going debates or theological or other disputes between commenters. Please understand that we pay our writers to defend The Remnant’s editorial positions. We thus acknowledge no moral obligation whatsoever to allow anyone and everyone to try to undermine our editorial policy and create a general nuisance on our website.  Therefore, Remnant moderators reserve the right to edit or remove comments, and comments do not necessarily represent the views of The Remnant.
back to top
Last modified on Friday, August 3, 2018
Tweet

More in this category: « #SackTheSynod Scuttle the Soros Magisterium: Stop the Synod »