McCarrick: In the Spirit of Francis 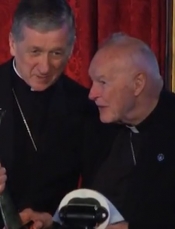 So even though most well-informed lay Catholics knew exactly what Cardinal McCarrick was all about even twenty years ago, somehow Cardinal Blase Cupich, Pope Francis and the rest were completely in the dark, even to the extent of awarding this monster with trophies and high honors? This beggars belief.

McCarrick's red hat is not the only one that needs to be turned in. Racks full of them need to be, starting with McCarrick's former roommate, Cardinal Kevin Farrell--appointed by McCarrick as vicar-general for the archdiocese of Washington, named auxiliary bishop of Washington by John Paul II, consecrated bishop by McCarrick, and appointed Prefect of the Vatican Dicastery for the Laity, Family and Life and finally created Cardinal by Pope Francis in 2016.

By the way, #stopthesynod.  Stop the Synod on Young People, and stop Ireland's World Meeting of Families--at least until this mess can be sorted out and it can be determined how and why the Catholic hierarchy was transformed into one, big, fabulous gay pride parade!

[Comment Guidelines - Click to view]
The Remnant values the comments and input of our visitors. It’s no secret, however, that trolls exist, and trolls can do a lot of damage to a brand. Therefore, our comments are heavily monitored 24/7 by Remnant moderators around the country.  They have been instructed to remove demeaning, hostile, needlessly combative, racist, Christophobic comments, and streams not related to the storyline. Multiple comments from one person under a story are also discouraged. Capitalized sentences or comments will be removed (Internet shouting).
The Remnant comments sections are not designed for frequent personal blogging, on-going debates or theological or other disputes between commenters. Please understand that we pay our writers to defend The Remnant’s editorial positions. We thus acknowledge no moral obligation whatsoever to allow anyone and everyone to try to undermine our editorial policy and create a general nuisance on our website.  Therefore, Remnant moderators reserve the right to edit or remove comments, and comments do not necessarily represent the views of The Remnant.
back to top
Last modified on Monday, July 30, 2018
Tweet