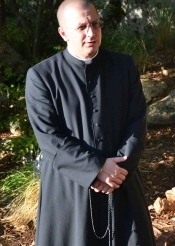 In a true spirit of heroism and love for the Church, Sicilian priest Don Minutella has put his neck on the line and said the Gospel truth for the sake of those who today are being tempted by the pontifical "operation of error to believe lying." (2 Thess. 2:10)

Don Minutella was sacked last June by the Vatican for his open criticism of Pope Francis' teachings, and has been under an order of silence for the past nine months, but Rome is now giving him a chance to "vindicate" himself. Under the pretext of asking him to pledge fidelity to the pope, the Vatican is asking Don Minutella to deny his Catholic Faith, that is, to cease from his strict adherence to Church teaching and to accede to the perfidious teachings of Pope Francis, i.e. his blessing of adultery via Amoris Laetitia, his blessing of Luther, gays, Marxists, and anti-life globalists, and his incessant push to unite the Catholic Church with world religions. Rome has said that if Minutella doesn't consent to their wish, he will receive "two excommunications."

In response to Rome's request, Fr. Minutella has put together a 23 minute video to solidify his position. His nine months of silent obedience has given birth to this beautiful testimony of faith, which is a must-see for all Catholics, especially those who today that are being tempted with the vice of false obedience.

As a true man of God, Don Minutella realizes that the excommunications he is threatened with could never be valid, but are the very trophies that God wishes to bestow upon his elect. He understands well that when obedience means committing a sin or even a fault, one must not obey, for such obedience is not obedience, but false obedience, since it does not have as its end the fulfillment of justice, but the fulfillment of self and pride.

Minutella's position is only just. If a bishop or pope chooses to strike out and defect from the Faith just for worldly plaudit and acclaim, that's his choice, but it doesn't mean we are supposed to be like him. For mere man we shall never offend. Our duty as Church is to pray for the pope in true charity, that he may come around and join the True Magisterium in advancing the One True Apostolic Faith as propounded by the popes for the past 2000 years.

In the meantime our allegiance is to God, not to a man who uses his rank to mislead the Church. Don Minutella points out how the church of "fake mercy" is advancing the globalist design of bringing in Jihad "refugees" to disrupt the peace and serenity of Christian nations, while "bringing to the guillotine" faithful Catholics who remain true to the Faith. The "love of the poor and oppressed" so often touted by Francis is the classic line used by socialists to eulogize communists as martyrs, which ties with the fact that communist activists like Archbishop Óscar Romero and Dom Hélder Câmara are now up for canonization—something that has never occurred in Church history.

The fact is that Francis' formation is largely Marxist. By his own admission, communist columns which he subscribed to had to be smuggled into his place of work during his early days, because their publication was illegal in Argentina at that time.

It is no secret that Francis is an avid promoter of Liberation Theology, which is nothing more than Marxism advanced as "Catholicism." Fr. Jorge Bergoglio in fact was a protege of the radical-left Fr. Pedro Arrupe, who made Bergoglio a provincial of the Jesuits at the age of 36. Arrupe presided over the order during its most intense period of liberalization and used Bergoglio as a liberal enforcer at the infamous worldwide gathering of Jesuits in 1975 that sealed the Jesuits into what they are today—a bureaucratic monstrosity to subvert the Catholic Church with Marxist Liberation Theology. https://www.lifesitenews.com/news/a-communist-pope-an-interview-with-author-george-neumayr

Don Minutella is against the idea of Francis using his position to advance such political agenda, and has minced no words about it. It remains to be seen what action the Vatican will take against him, but it appears he has lined up with the martyrs of history to receive his prize. His staunch and ardent testimony beautifully fulfills the prophecy of St. Paul: "All that will live godly in Christ Jesus, shall suffer persecution." (2 Timothy 3:12)

One can't help but to note, too, that Minutella's fidelity to the Catholic Church is grounded in his true devotion to Mary as taught by St. Louis de Montfort, whom he mentions throughout his testimony. May Don Minutella be a worthy instrument to assist the Blessed Virgin in crushing the serpent's attack against the Church.

[Comment Guidelines - Click to view]
The Remnant values the comments and input of our visitors. It’s no secret, however, that trolls exist, and trolls can do a lot of damage to a brand. Therefore, our comments are heavily monitored 24/7 by Remnant moderators around the country.  They have been instructed to remove demeaning, hostile, needlessly combative, racist, Christophobic comments, and streams not related to the storyline. Multiple comments from one person under a story are also discouraged. Capitalized sentences or comments will be removed (Internet shouting).
The Remnant comments sections are not designed for frequent personal blogging, on-going debates or theological or other disputes between commenters. Please understand that we pay our writers to defend The Remnant’s editorial positions. We thus acknowledge no moral obligation whatsoever to allow anyone and everyone to try to undermine our editorial policy and create a general nuisance on our website.  Therefore, Remnant moderators reserve the right to edit or remove comments, and comments do not necessarily represent the views of The Remnant.
back to top
Last modified on Monday, November 20, 2017
Tweet
More in this category: « The Pre-Francis Crisis: A Cartoon Reminder Advocates of Abortion, Euthanasia, Invited to Speak at the Vatican »