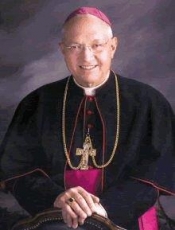 An email was sent last week by Vicar General James Bartylla to priests in the diocese of Madison, saying they could deny funeral rights for those in same-sex partnerships. The diocese released a statement noting that said considerations within the email were not official policy, but did meet with the approval of Bishop Morlino.

Now the wounded advocates are demanding change via an online petition petition being circulated to remove the Bishop of the Diocese of Madison, claiming that:

Bishop Morlino exerts a corrosive and corrupt influence over the Diocese through his transparent attempts to influence the voting habits of its members.  His threats to priests amount to a violation of the Constitutional separation of church and state.  Furthermore, he is an open and practicing bigot whose attitudes and opinions about the LGBTQI members of his Diocese (and our beloved families) are nothing short of inhumane.  His hatred and discrimination are undoubtedly a violation of Christ’s admonition to love thy neighbor.

For more on the story go HERE


REMNANT COMMENT: Bishop Robert Morlino is a good and holy man.   Remnant TV followers will recall when His Excellency rather courageously apologized for something that had appeared under his name several years ago, suggesting the Society of St. Pius X is in schism. We applauded His Excellency's integrity and humility at the time in this RTV episode.

Now Bishop Morlino is being attacked not over a matter of his personal opinion, but rather over the faithful exercise of his office and the conscientious application of the Catholic Church's moral law as laid out in the Catechism of the Catholic Church.  The activists presently demanding his dismissal are in reality trying to bully and intimidate all Catholic bishops and priests who remain faithful to official Church teaching.

They are indirectly demanding changes to the Catechism of the Catholic Church itself:

"2357 Homosexuality refers to relations between men or between women who experience an exclusive or predominant sexual attraction toward persons of the same sex. It has taken a great variety of forms through the centuries and in different cultures. Its psychological genesis remains largely unexplained. Basing itself on Sacred Scripture, which presents homosexual acts as acts of grave depravity, tradition has always declared that "homosexual acts are intrinsically disordered." They are contrary to the natural law. They close the sexual act to the gift of life. They do not proceed from a genuine affective and sexual complementarity. Under no circumstances can they be approved." (Catechism of the Catholic Church)

The Bishop is acting out of love for the faithful of his diocese who have the right before God to be informed of the precise teachings of the Church on these and other difficult moral questions -- teachings which have but one objective: the salvation of the souls and the prevention of scandal.

Please support Bishop Morlino by signing our petition defending him against hateful demands for his dismissal—demands based on a manifest intolerance of the Church’s moral theology and the men who've promised to defend it.

[Comment Guidelines - Click to view]
The Remnant values the comments and input of our visitors. It’s no secret, however, that trolls exist, and trolls can do a lot of damage to a brand. Therefore, our comments are heavily monitored 24/7 by Remnant moderators around the country.  They have been instructed to remove demeaning, hostile, needlessly combative, racist, Christophobic comments, and streams not related to the storyline. Multiple comments from one person under a story are also discouraged. Capitalized sentences or comments will be removed (Internet shouting).
The Remnant comments sections are not designed for frequent personal blogging, on-going debates or theological or other disputes between commenters. Please understand that we pay our writers to defend The Remnant’s editorial positions. We thus acknowledge no moral obligation whatsoever to allow anyone and everyone to try to undermine our editorial policy and create a general nuisance on our website.  Therefore, Remnant moderators reserve the right to edit or remove comments, and comments do not necessarily represent the views of The Remnant.
back to top
Last modified on Saturday, November 4, 2017
Tweet