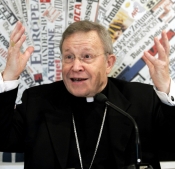 Like their father the devil, heretics are usually very cunning, appearing to affirm the faith while simultaneously subverting it. However every once in a while Satan produces a heretic actually dumb enough to outright deny the faith and show everyone their true nature.

Enter Cardinal Kasper from whose mouth proceeds the very excrement of Satan, saying:

The God who is enthroned over the world and history as a changeless being is an offence to man. One must deny Him for man’s sake, because he claims for himself the dignity and honour that belong by right to man. We must resist this God, however, not only for man’s sake, but also for God’s sake. He is not the true God at all, but rather a wretched idol. For a God who is only alongside of history, who is not himself history, is a finite God. If we call such a being God, then for the sake of the Absolute we must become absolute atheists. Such a God springs from a rigid worldview; he is the guarantor of the status quo and the enemy of the new. [Walter Kasper, “Gott in der Geschichte”, an essay that appeared in Gott heute: 15 Beiträge zur Gottesfrage, edited by Norbert Kutschki (Mainz: Matthias-Grünewald-Verlag, 1967),]

Of course this is not only a denial of the dogma of God's immutability (see Denzinger 428, 1782) but it is also blasphemy to say that the God the Catholic Church has always professed to believe in is a “wretched idol” and an “enemy”.  And this is the man whose proposal is the inspiration for the upcoming Synod on the Family and whose theology of “mercy” is allegedly “doing theology on one's knees”.

If God sentenced Arius to a painful death by diarrhea for denying the deity of Jesus then I'm afraid to know what he will do to those who follow Kasper's denial of the immutability of God.

[Comment Guidelines - Click to view]
The Remnant values the comments and input of our visitors. It’s no secret, however, that trolls exist, and trolls can do a lot of damage to a brand. Therefore, our comments are heavily monitored 24/7 by Remnant moderators around the country.  They have been instructed to remove demeaning, hostile, needlessly combative, racist, Christophobic comments, and streams not related to the storyline. Multiple comments from one person under a story are also discouraged. Capitalized sentences or comments will be removed (Internet shouting).
The Remnant comments sections are not designed for frequent personal blogging, on-going debates or theological or other disputes between commenters. Please understand that we pay our writers to defend The Remnant’s editorial positions. We thus acknowledge no moral obligation whatsoever to allow anyone and everyone to try to undermine our editorial policy and create a general nuisance on our website.  Therefore, Remnant moderators reserve the right to edit or remove comments, and comments do not necessarily represent the views of The Remnant.
Last modified on Saturday, August 29, 2015