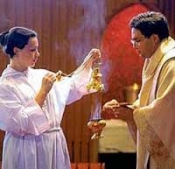 In recent months, several Catholic media outlets have reported that a few bishops and pastors have bravely taken the step to abolish the use of altar girls, a grave abuse “officially” approved for use in the Novus Ordo Missae in 1994. This gradual return to sanity has prompted the liberal Jesuit journal America to publish an editorial entitled “Save the Altar Girls”. As one would expect, this commentary advocates the “rights” of female altar servers replete with typical sound bites such as “sexism”, “equality”, “limiting laywomen”, “privilege of ministry”, “called by the Spirit to use one’s talents”, etcetera.

Despite the numerous errors present in this editorial, we are not required to parlay them individually to successfully demolish its argument for retaining altar girls. Fortunately for the reader’s brevity, the entirely of these corrections can be summarized in a universal principle of the Church: women cannot exercise a liturgical office.

But is this principle¾as liberals claim¾a relic of antiquated “sexist” male superiority, or rather the consequence of God’s created natural order which He further confirmed through His institution of an all-male priesthood in both the Old and New Testament, and therefore forms an integral and immutable part of the Catholic Faith?

The answer for any sensible Catholic is that this is God’s holy will and it must continue to be obeyed, despite the liberal-inspired politically-correct ideals that afflict our increasingly secularist society¾and thanks to Modernism, also the Church. So let’s examine a few points to see why this liturgical principle exists.

In the natural order of things, mankind is distinctly divided into two genders, man and woman, who also have distinctive natures, masculine and feminine, and consequently as ordained by God, different roles in society¾this is admirably exemplified in the most basic unit of the social order, the family. Furthermore, there are roles that men cannot fulfill (e.g., motherhood) and there are roles that women cannot fulfill (e.g., fatherhood)¾this is also the case concerning liturgical offices.

A male clergy was instituted by Almighty God to provide the official ritualistic acts of religion commonly called “the liturgy”¾under the Old Covenant this consisted of the high priest, priests and Levites, while under the New Covenant, bishops, priests and ranks of lesser clergy. These lesser ranks¾what we called minor holy orders[1]¾as well as the first two major orders¾subdiaconate and diaconate¾ultimately became preparatory stages for the priesthood, whereby the man is ordained alter Christus¾the New Man.

Did you miss this one the first time around? It appeared in The Remnant back in 2011. Subscribe today and never miss another!


Some conservatives have attempted to wave away the accusation that altar girls are being introduced as part of a liberal agenda to enable women priests¾but esto realis (are you kidding me?)! The agenda as well as the slippery slope of this erroneous mentality, particularly amongst impressionable young girls, is all too real. To naively think the opposite is tantamount to declaring that die-hard feminists purposefully infiltrated Girl Scouts of America to learn how to make cookies. Their self-gender-hating goal is well known: to denature girls by altering them from their God-given feminine nature thereby destroying their identity as true women. This is even more diabolical when attempted from within the sanctuary.

On the other hand, we cannot merely argue against the use of altar girls because it could be psychologically detrimental to promoting altar boys, thus leading to a crisis of priestly vocations. While a legitimate argument from the natural realm, nevertheless it is fundamentally weak. Our first argument of course is the aforementioned immutable liturgical law which is based upon God’s divine law impressed upon nature. Secondly, a crisis of vocations already existed in the post-conciliar period before the illegitimate implementation of altar girls. This was the result of a priestly identity crisis that followed in the wake of the Second Vatican Council¾hence the founding of the Priestly Society of St. Pius X by Archbishop Marcel Lefebvre. Thirdly¾and a fortiori¾the acolyte’s office does not actually exist for the promotion of priestly vocations, though this can certainly be an effect (as can singing in the schola). This is better realized when we understand that the acolyte’s office was intended to be fulfilled by a cleric ordained to that namesake minor order, and therefore is already committed to the priesthood. However, because parishes do not abound with clerics in minor orders, the universal Church has allowed laymen[2] the immense privilege (as opposed to a right) to fulfill certain liturgical offices such as acolyte.

Unfortunately, besides that of acolyte, other liturgical offices have been regularly abused in the New Mass for an even longer period of time¾i.e., female lectors (reading the Epistle or Lessons), extraordinary Eucharistic ministers,[3] and cantors (leading the faithful in alternating certain propers)[4] ¾and last but not least, women donning cassocks and surplices which are both clerical and liturgical garments. Yet the outcry against these contraventions has been relatively minor from conservatives in relation to opposing female altar servers. Is this perhaps an indication that opposition to altar girls is rooted more in a sentimental ideal of altar boys, rather than the principle of the liturgical office of acolyte?

It is obvious that such liturgical abuses need to be abolished as they are objectively an offense against God (note: we cannot subjectively judge the young ladies). A typical road block often raised to dissuade pastors from abolishing the abuse of female altar servers (or other aforementioned illegitimate practices) is to cite the “hurt feelings” of the many devoted girls who have sincerely embraced the ministry of serving God at the altar. The answer to this is simple and direct: God’s will, the natural order, and the Church’s liturgical laws must be obeyed, otherwise dire consequences will ensue¾like hurt feelings.

To alleviate some of this pain and suffering¾and since ecclesiastical apologies seem to be in vogue for supposed failings of the Church (you know, like male “sexism”)¾perhaps a distinguished prelate can offer a public apology to all altar girls (and women “ministers”) for a real failing on the part of churchmen. After all, these girls, whose devotion to God should not be questioned, deserve such an apology¾for being grievously misled into a position contrary to God and His Church, being put in a situation which inherently contributes to the diminishing of their feminine nature, and for being used as pawns in a liberal agenda to weaken manhood and consequently the priesthood. This prelate could also conclude that he hopes the Blessed Virgin Mary, the Mother of God, will be an inspiring example for all women who truly wish to serve the Lord in the feminine capacity with which their Creator endowed them. For though she “shut up in her womb He Who the universe could not contain”, nonetheless never possessed, nor ever sought priestly powers, being content with the role that God gave her.

Footnotes
1 In order, Porter, Lector, Exorcist and Acolyte.
2 Consisting of both men (whether married or not) and boys, particularly the former because an ordained acolyte is an adult, not an adolescent. While it is more common to see boys serving here in the States, in England it is rather the opposite, even historically as seen in a famous photograph of Fr. Adrian Fortescue with his parish servers, who are mostly men, and testimonies of members from the 1950s and early 1960s of the Archconfraternity of St. Stephen (a serving guild founded in 1905, which the SSPX has helped to restore and spread for the past twenty years).
3Which is not only a grave abuse that leads to sacrilege, but a fortiori, it was actually prohibited by the Vatican, though later overlooked with a blind eye.
4 This is part of the schola’s liturgical office of singing the propers of the Mass (e.g., the Introit, Gradual, Alleluia, etc.) which in a normal parish situation cannot be sung by women (an abuse unfortunately found sometimes at the traditional Mass as well). An allowance though has always existed for female religious in their own convents.
Published in Fetzen Fliegen

[Comment Guidelines - Click to view]
The Remnant values the comments and input of our visitors. It’s no secret, however, that trolls exist, and trolls can do a lot of damage to a brand. Therefore, our comments are heavily monitored 24/7 by Remnant moderators around the country.  They have been instructed to remove demeaning, hostile, needlessly combative, racist, Christophobic comments, and streams not related to the storyline. Multiple comments from one person under a story are also discouraged. Capitalized sentences or comments will be removed (Internet shouting).
The Remnant comments sections are not designed for frequent personal blogging, on-going debates or theological or other disputes between commenters. Please understand that we pay our writers to defend The Remnant’s editorial positions. We thus acknowledge no moral obligation whatsoever to allow anyone and everyone to try to undermine our editorial policy and create a general nuisance on our website.  Therefore, Remnant moderators reserve the right to edit or remove comments, and comments do not necessarily represent the views of The Remnant.
back to top
Last modified on Tuesday, February 3, 2015
Tweet
More in this category: « Important New Study: An Analysis of the "Shortage of Priests" as Self-imposed by the Catholic Church Press Release: Creation, Evolution, and the Crisis of Faith »