Pay No Attention to the Man Behind the Vortex

Written by  Christopher A. Ferrara
Rate this item
(90 votes) 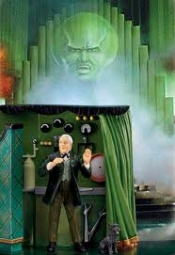 I first met Mike Voris at the 2012 Roman Forum Symposium at Lake Garda and then again at the Catholic Identity Conference in September of that year. On both occasions the other participants and I found him to be a regular fellow, an enjoyable companion and an intelligent observer of the current ecclesial scene who had no problem with the traditionalist position on the crisis in the Church even if, perhaps for prudential reasons, he had not embraced it entirely in public (which I can certainly understand).

Quite simply, I liked the guy. We all did. In fact, I thought I had found a new friend, if only a Nicodemus friend, as well as a valuable ally in the lay movement to restore the devastated vineyard. He even had me on his “Mic’d Up” talk show as a featured guest.

But then someone named Terry Carroll entered the picture. Over the past year it seems he has assumed the position of the “brains” of the CMTV operation (if not also the banker). In February of 2014 there suddenly appeared on the website of Church Militant TV (CMTV) what Louie Verrecchio aptly called “the mystery manifesto,” which is now known to have been authored by Carroll. This document advanced the curious proposition, unsupported by any teaching of the Magisterium, that while Catholics are free to engage in public criticism of any member of the hierarchy whose actions warrant it, as CMTV does every day, they may never criticize the Pope publicly because “the Pope is different.” CMTV, wrote Carroll, “will not engage in public criticism of the Pope. Period.”

Fine. Whatever. But Carroll did not stop there. His manifesto was only the beginning of a truly obsessive campaign to proclaim his idiosyncratic opinion as the moral standard for Catholics who write for the traditionalist press. In the same manifesto Carroll declared that The Remnant, Catholic Family News, John Vennari and yours truly, are publishers of “spiritual pornography” because we have been critical of what the press likes to call “the Francis revolution.”

For some reason, however, Carroll has hurled no such accusation at non-traditionalist commentators, many of whom have written things

, there was Voris denouncing Salt and Light TV because it had attacked Cardinal Burke for expressing the very sentiments Voris himself had censored and apologized for airing! Adherence to the Carroll Policy had twisted the poor man into a pretzel.

This, then, is the problem with apostolates controlled by people like Carroll, who is more interested in turf defense than truth. It was expediency, not principle, that motivated him first to claim that the Pope may never be criticized in public, only to admit that the Pope can be criticized in public once it became apparent that CMTV’s credibility was being destroyed by his original position. And it is expediency, not principle, that dictates Carroll’s current position that when CMTV publicly excoriates “wicked” bishops and cardinals as worthy of damnation this shows “love for the Church,” while The Remnant’s and CFN’s criticisms of Francis’s pontificate, employing no such invective, are beyond the pale. (The Remnant and CFN, echoing Sister Lucia of Fatima, often refer to “diabolical disorientation” in the Church, but this connotes confusion rather than subjective guilt, although there are some neo-Modernist prelates who are clearly deliberate enemies of the Faith.)

Terry Carroll has single-handedly destroyed what could have been a fruitful collaboration between CMTV and the traditionalist media. I don’t know how deeply Carroll has his clutches into CMTV’s operations, but I would say this to Mike Voris out of respect for what he is trying to do for the good of the Church: if there is any way you can dissociate yourself from this character, do it now before he inflicts irreparable damage on your apostolate.

Published in Fetzen Fliegen
back to top
Last modified on Tuesday, November 11, 2014
Tweet

More in this category: « I say full communion, you say partial communion. Let’s call the whole thing off Fr. Michael Rodriguez and "The Papist Priest" »