Archbishop Viganò’s homily for the Sunday of the Sacred Family 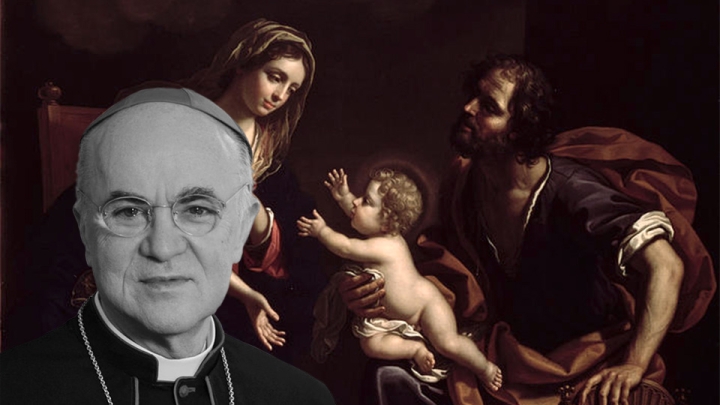 And he was submissive to them.
And his mother kept all these things in her heart;
and Jesus grew in wisdom, age, and grace
before God and before men. -Lk 2:51

In the Octave of the Epiphany, the Holy Church celebrates the Holy Family of Jesus, Mary, and Joseph, placing this feast immediately after the manifestation of the divinity of Our Lord. But why should we celebrate the memory of the Holy Family, a mystery of intimacy and affection to be preserved around the family hearth, precisely when the divine kingship of the Child King, adored by the shepherds and the Magi from the East, is revealed?

The reason is that the family – the natural one, certainly, but even more so the one sanctified by the Sacrament of Matrimony, and to the highest degree that in which the parents are the Blessed Virgin and the Patriarch Joseph, and the child is the Incarnate Word – is the place where that order which is the necessary premise for the social Kingship of Our Lord Jesus Christ is realized in Charity. It unites spouses in the hierarchical relationship which has as its model the love between the Head of the Church and His Mystical Body. It prepares children – in this “microcosm” which is rightly recognized as the “cell of society” – to be good Christians, valiant soldiers of Christ, honest citizens, wise and prudent rulers.

Without the family there can be no well-ordered society; and without the Christian family there can be no Christian society in which the Lordship of Christ is recognized. In the family, parents exercise their authority over their children in God’s name, and it is therefore within the framework of God’s Law that this authority is legitimate and can avail itself of the graces of state to find obedience in their children. And this potestas – recognized by natural law – acquires a supernatural dimension when it is inspired by the infinite love with which the Father loves the Son and the Son loves the Father; a divine love that is of such power as to be a person: God the Holy Spirit. Just as man shows in his faculties – memory, intellect and will – the Trinitarian imprint of the Creator, so too the family is in some way a mirror of the Most Holy Trinity, because in it we find the creative power of the Father, the redemptive obedience of the Son, the sanctifying love of the Holy Spirit. But we also find the awareness of one’s own identity and traditions (memory), the ability to treasure them to face present trials (intellect) and the bond of love between spouses and between parents and children (will).

It is no coincidence that, in the mass manipulation of the Great Reset conducted through the recent pandemic farce, they wanted to separate the elderly from their loved ones, parents from children, grandparents from grandchildren: the loss of these family and hierarchical relationships, with all that these relationships entail, was the required step to isolate people, weaken them psychologically, weaken them spiritually, and thus be able to force them to obey.

When we pray in the Pater Noster, “Thy kingdom come, thy will be done,” we often do not pay attention to these words. We ask that the Lordship of Christ over the nations be affirmed, because only where Christ reigns can peace and justice reign. We ask that Christ reign because this is the will of God: Oportet autem illum regnare donec ponat omnes inimicos sub pedibus ejus (1 Cor 15:25) – He must reign, until He puts all enemies under His feet (Ps 109:1). But in order for Him to reign in society, rulers and subjects must be good Christians; and for this to happen, the family is necessary, a “domestic church” and a school for life in the civil consortium. It is in the Catholic family that children are conceived, born, sanctified, and educated, preparing them to be good Christians, honest citizens, and future parents. And it is in a misguided family – or in its diabolical parody created by LGBTQ ideology – that children are killed in body and soul, perverted, and corrupted, causing their vices also to corrupt the social and ecclesial body.

The epochal battle we are fighting against the globalist Leviathan has as its purpose – as we well know, by the admission of its own proponents – the systematic destruction of every trace of Christ’s presence from souls, families, and society, in order to replace it with the dark horror of Satan’s lordship and the reign of the Antichrist. In this battle we are not only besieged by powerful and unleashed enemy forces, but also by the fifth columns that, within the Church and even in positions of government, support the infernal plan of the New World Order due to self-interest, blackmail, or cowardice. Abortion, divorce, euthanasia, gender ideology, homosexuality, and neo-Malthusianism are nothing more than instruments with which to destroy society, but even before this they are intended to destroy the family, because in the family that there can be realized that form of resistance to the dictatorship of aligned thought, thanks to which one can preserve one’s determination to courageously defend one’s Faith and identity.

On closer inspection, everything that this corrupt and barbaric world imposes on peoples is always oriented towards control and submission. And just when freedom is supposedly exalted by means of shaking off the gentle yoke of God’s Law, we see the chains of Satan’s tyranny clamping onto our wrists.

It is no coincidence that, in the mass manipulation of the Great Reset conducted through the recent pandemic farce, they wanted to separate the elderly from their loved ones, parents from children, grandparents from grandchildren: the loss of these family and hierarchical relationships, with all that these relationships entail, was the required step to isolate people, weaken them psychologically, weaken them spiritually, and thus be able to force them to obey. On closer inspection, everything that this corrupt and barbaric world imposes on peoples is always oriented towards control and submission. And just when freedom is supposedly exalted by means of shaking off the gentle yoke of God’s Law, we see the chains of Satan’s tyranny clamping onto our wrists.

On the other hand, how could the Enemy love an institution – the family, in fact – composed of a father and a mother, who refer to the Eternal heavenly Father who begets us to life and grace, and to a Mother who is our Advocate at the throne of His divine Son? It is not surprising that the enemies of God also want to erase his name, replacing him with “parent 1” and “parent 2,” precisely in order to eliminate those blessed names, with which we can address none other than God as “Abba, Father,” and the heavenly Mother of God as “Mother.” Nor are we surprised by the hatred that exists towards the father figure, who is the archetype of God’s authority, so that ecclesiastical and civil superiors are also called fathers, and have a duty to behave as fathers.

At the beginning of this meditation, I asked why the Church wanted to establish the celebration of the Holy Family on the Sunday in the Octave of the Epiphany. We have the answer: the Holy Family shows us the model of the Christian family which is the necessary and indispensable premise for the divine Kingship of Our Lord to be realized in society, fulfilling the prophecy of the Psalmist, which we heard in the Mass of Epiphany: Et adorabunt eum omnes reges terræ; omnes gentes servient ei (Ps 71:11).

Let us therefore invoke Our Lord, the Virgin Mother, and Saint Joseph, asking them to protect our families, to preserve them in the Grace of God, and to enable them to cooperate with Faith and Charity in the plan of Providence. If Christ reigns in them, he will also reign in civil society. Adveniat regnum tuum; fiat voluntas tua.

And so may it be.

[Comment Guidelines - Click to view]
The Remnant values the comments and input of our visitors. It’s no secret, however, that trolls exist, and trolls can do a lot of damage to a brand. Therefore, our comments are heavily monitored 24/7 by Remnant moderators around the country.  They have been instructed to remove demeaning, hostile, needlessly combative, racist, Christophobic comments, and streams not related to the storyline. Multiple comments from one person under a story are also discouraged. Capitalized sentences or comments will be removed (Internet shouting).
The Remnant comments sections are not designed for frequent personal blogging, on-going debates or theological or other disputes between commenters. Please understand that we pay our writers to defend The Remnant’s editorial positions. We thus acknowledge no moral obligation whatsoever to allow anyone and everyone to try to undermine our editorial policy and create a general nuisance on our website.  Therefore, Remnant moderators reserve the right to edit or remove comments, and comments do not necessarily represent the views of The Remnant.
back to top
Last modified on Thursday, January 12, 2023
Tweet

More in this category: « The Good Cop Files: Forming Men for the Aftermath  Brazil, Pray the Rosary »