What Unites Traditional Catholics Against Satan and the Globalists 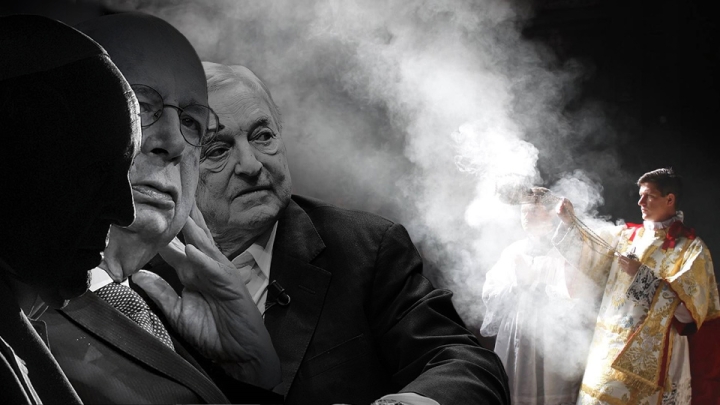 In his editorial note to a recent article in The Remnant, Michael Matt commented on the idea that Traditional Catholics appear divided today:

“Not sure who started the fake news that Traditional Catholics are hopelessly divided, but I have NEVER seen Traditionalists more united than we are right now, and I've been at this all of my life.”

We can lose sight of this fundamental unity when we focus on the various ways in which Traditional Catholics try to respond to the ongoing crisis within the Church. After all, it is true that many Traditionalists have conflicting opinions about Vatican II, Francis, and the legitimacy of the Novus Ordo Missae. But as important as these issues are, they can belie the fact that we all generally want the same thing: the restoration of the unadulterated Catholic Faith, a truly Catholic hierarchy, and the Tridentine Mass.

Archbishop Lefebvre wrote his Open Letter to Confused Catholics in 1986, two years before his consecration of bishops that led to John Paul II’s Ecclesia Dei and the resulting practical separation of many Traditional Catholics. In a certain sense, then, we can look to Open Letter to Confused Catholics as at least somewhat representative of common Traditionalist beliefs. Here is how the archbishop responded to the idea that he was somehow the leader of the Traditionalists:

“I am not the head of a movement, even less the head of a particular church. I am not, as they never stop writing, ‘the leader of the traditionalists.’ They have come to describe certain persons as ‘Lefebvrists,’ as though it were a case of a party or a school. This is an abuse of language. I have no personal doctrine in the matter of religion. All my life I have held to what I was taught at the French Seminary in Rome, namely, Catholic doctrine according to the interpretation given it by the teaching authority of the Church from century to century, since the death of the last Apostle which marked the end of Revelation.”

He simply wanted to follow and transmit the integral Catholic Faith, which does not evolve over time as the Modernists teach. He had “no personal doctrine in the matter of religion” because he wanted to always believe and practice what the Church taught. At root, all Traditional Catholics share this conviction — we want to believe and practice the same Catholic Faith that led the saints to Heaven.

The real tragedy of the post-Conciliar crisis has been to put opposition between the apparent authority of the Church and immutable Catholic truth.

St. Pius X saw the grave threats to Catholicism and formulated his Oath Against Modernism in 1910 to clearly affirm the truths which opposed the Modernist errors. As a general matter, all Traditional Catholics believe the truths contained in that Oath, including:

This latter proposition stands against all of the anti-Catholic innovation carried out since Vatican II. Thus, if we were to realize that a particular belief we held opposed the “doctrine of faith handed down to us from the apostles through the orthodox Fathers,” we would immediately abandon our erroneous belief and embrace the truth. Unlike Francis and so many within the Catholic hierarchy, we believe the words written by St. Paul:

This leaves no room for doubt: no authority, not even an angel from Heaven, can change immutable Catholic truth.

The real tragedy of the post-Conciliar crisis has been to put opposition between the apparent authority of the Church and immutable Catholic truth. We know we must be loyal to the Catholic hierarchy, especially the pope; and we know we must adhere to what the Church has always taught — what happens when they conflict?

For decades, some Traditional Catholics have disagreed among themselves about whether, and to what extent, we saw an actual conflict. If there is anything beneficial about Francis’s occupation of the papacy, though, it has been the fact that is now beyond question that we have a fundamental conflict between what Francis and the hierarchy teach and what the Church has always taught (and must always teach). And so we want the Catholic truth, and we want a Catholic hierarchy that clearly articulates and defends that truth.

We stand united against Satan, the globalists, and far too many members of the Church’s hierarchy. Nonetheless, the nature of the current crisis is such that we might always have some disagreements about what needs to be done to remedy the situation. This does not suggest we are “hopelessly divided” — rather it reflects that we are human in great need of God’s mercy and grace.

As part of this longing to align our beliefs and practices with those of all the saints, we want to worship God through the Tridentine Mass. Through experience, most of us have arrived at the same judgment articulated by Cardinals Ottaviani and Bacci in their well-known 1969 letter to Paul VI, the so-called “Ottaviani Intervention”:

“[T]he Novus Ordo represents, both as a whole and in its details, a striking departure from the Catholic theology of the Mass as it was formulated in Session XXII of the Council of Trent.”

Why is it, we wonder, that so much variety and sacrilege is allowed in the Novus Ordo and we cannot worship according to the Mass which St. Pius V said could never be abrogated?

So we want Catholic truth, a thoroughly Catholic hierarchy, and the Tridentine Mass. In this, Traditional Catholics are united with each other and with the Church Triumphant. We stand united against Satan, the globalists, and far too many members of the Church’s hierarchy. Nonetheless, the nature of the current crisis is such that we might always have some disagreements about what needs to be done to remedy the situation. This does not suggest we are “hopelessly divided” — rather it reflects that we are human in great need of God’s mercy and grace.

And indeed, God permits this entire crisis to draw us to Him and His truth. For all such evils, Fr. Garrigou-Lagrange gave the following guidance on how we must turn to Jesus and His Blessed Mother:

“Whenever some major and deeply entrenched evil, such as Freemasonry and its effects, must be fought, whenever evil manifests itself as truly satanic, then to appease God’s justice spiritual action no less profound must come forward under immediate direction of her whom God set up as the terror of demons, Mary . . . Every apostle, even every fervent soul within the Church militant, should take some part in the contemplative life and its struggle, making renewed offering of self daily at Holy Mass with increasing devotion to the consecration, the act of the Savior’s eternal priesthood, and continuing the same offering throughout the course of the day in difficulties and trials and in the more and more perfect accomplishment of the duties of our state of life. When we accept supernaturally the daily trials sent to us by Providence, we should also ask God not for crosses but for the love of the crosses which He Himself has laid upon us . . . that we may be purified and become instruments of salvation for our neighbor.” (quoted in Archbishop Lefebvre’s The Spiritual Life)

May the Blessed Virgin Mary help us to follow Fr. Garrigou-Lagrange’s holy wisdom from this day until we see the complete restoration of our Holy Mother Church. Immaculate Heart of Mary, pray for us!

More in this category: « UNITED WE STAND: Confessions of a Non-Trad Clan NON SERVIAM: A History of Revolutions from Herod to Davos »