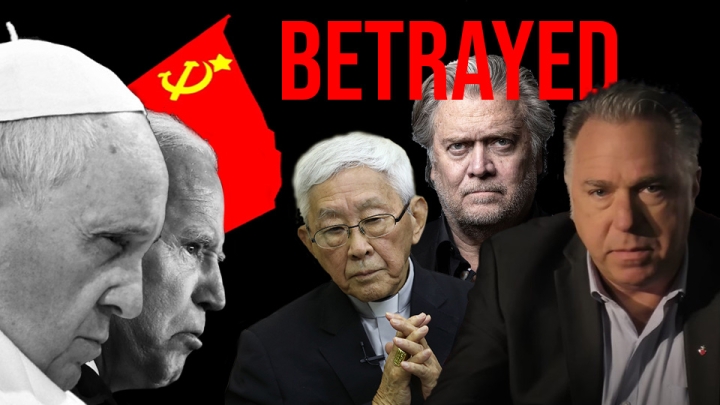 QUESTION: With 90-year-old Joseph Cardinal Zen on trial this week for defying the Chinese Communist Government, where's the Vatican? Why is pope Francis not speaking out in Zen's defense?

In this episode of The Remnant Underground, Michael takes a look at this question, as well as the ramifications of two recent developments:

Both of these developments come as a threat to the globalists, including Team Francis inside the Vatican, especially where Number 2 is concerned.  If Tony Fauci needs to be help responsible for crimes against humanity, certainly so too should Pope Francis.

And now the woke pope's alliance with Globalism and the radical Left is throwing the Catholic Church into civil war. In his bid to become chaplain of the New World Order, Francis has alienated powerful members of the hierarchy, including the former head of the Holy Office.

Let's review: Archbishop Charles Chaput blasted any priest who would dare give communion to Joe Biden – a “Catholic” who, according to Chaput, is not in communion with the Catholic Church.

Cardinal Zen, who  is now in prison, for standing up to Communist China -- a government with which Francis has signed a secret deal -- called the Vatican Secretary of State a "betrayer".

Bishop Schneider didn't pull any punches where the Vatican is concerned when he appeared in person on Steve Bannon’s War Room.

Cardinal Muller on EWTN accused Team Francis of engaging in a "hostile takeover of the Catholic Church."

Archbishop Vigano, in a recent interview, levelled the Vatican's sellout to Davos.

And there're much more. Whether you're Catholic or not, this is big!  Pope Francis — who provided the moral authority for the global lockdown and climate change revolution — is facing massive pushback from within his own Church, which is why the Vatican Secretary of State said THIS to the top brass at EWTN in Rome last week.

Finally, the civil war is on. Which side are you on?

Plus! Introducing Flores Cardinal Crayola, Prefect of the Congregation for Whole Body Listening…

[Comment Guidelines - Click to view]
The Remnant values the comments and input of our visitors. It’s no secret, however, that trolls exist, and trolls can do a lot of damage to a brand. Therefore, our comments are heavily monitored 24/7 by Remnant moderators around the country.  They have been instructed to remove demeaning, hostile, needlessly combative, racist, Christophobic comments, and streams not related to the storyline. Multiple comments from one person under a story are also discouraged. Capitalized sentences or comments will be removed (Internet shouting).
The Remnant comments sections are not designed for frequent personal blogging, on-going debates or theological or other disputes between commenters. Please understand that we pay our writers to defend The Remnant’s editorial positions. We thus acknowledge no moral obligation whatsoever to allow anyone and everyone to try to undermine our editorial policy and create a general nuisance on our website.  Therefore, Remnant moderators reserve the right to edit or remove comments, and comments do not necessarily represent the views of The Remnant.
back to top
Last modified on Tuesday, November 1, 2022
Tweet

More in this category: « Viganò Slams the Post-Conciliar Church on the Birthday of Vatican II On Visiting the Graves of the Dead »