Overcoming Francis, Synodality, and the Heresy of the Greatest Number 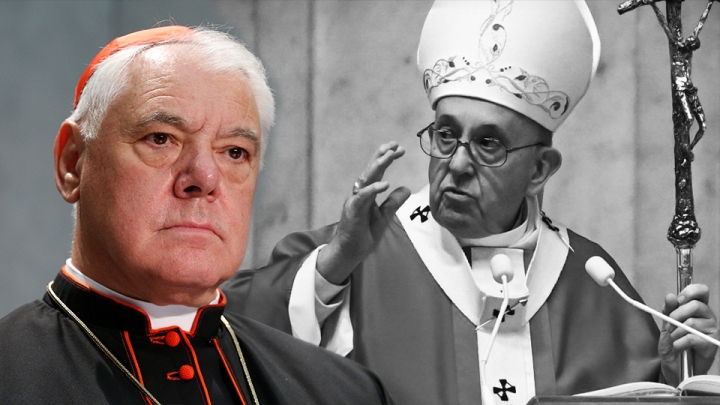 In their October 6, 2022 interview, Raymond Arroyo and Cardinal Gerhard Müller provided a striking assessment of Francis and the state of the Catholic Church:

Arroyo: “I have to say, I am, I am shaken when I hear you say, and you were just at a consistory, which we'll talk about in a moment, that you believe the synodal process is . . . shaping up into a hostile takeover of the Church, of an attempt to destroy the Church. Is that what you see here?”

Müller: “If they succeed, it will be the end of the Catholic Church. And we must resist it like the old heretics of the Arianism. When Arius thought, according to his ideas, what can God do and what can God not do? And it is irrationalism: human, the intellect to decide what is true and what is wrong.”

Hostile takeover of the Church; an attempt to destroy the Church; the end of the Church if they succeed — these sound like the warnings of rigid Traditional Catholics who criticize Vatican II and the Novus Ordo Missae; but increasingly they are the sober reflections of those who simply love the Church too much to continue denying reality. Francis’s unholy attacks on the Church continue to rouse Catholics of good will, Deo Gratias!

It does not matter how desperate the situation appears, Our Lord’s promise that the Church will not fail is manifested by “the remnant holding firm to tradition,” however few in number.

But, as in the time of the Arian heresy mentioned by Cardinal Müller, many otherwise sincere Catholics still feel that they cannot possibly resist the majority of their fellow Catholics, including almost the entire hierarchy, who remain under the spell of the anti-Catholic errors. In his Saint Athanasius: Defender of the Faith, Michael Davies wrote of this in terms of the “heresy of the greatest number”:

“The life of St. Athanasius provides us with a valuable antidote when we are tempted to succumb to one of the most pervasive of contemporary heresies, i.e., that truth must necessarily lie with the opinion espoused by the greatest number.”

Michael Davies went on to summarize the great lesson from St. Athanasius about being in the small number of believers, a lesson that is essential today:

“In a letter addressed to St. Athanasius in 371 St. Basil goes to the extent of claiming that: ‘The whole Church is in dissolution.’ In 373, the year that Athanasius died, St. Basil wrote to him almost in despair, asking: ‘Has the Lord completely abandoned His Church?’ But however desperate the situation of the Church may appear to be, and however few in number the remnant holding firm to tradition, they can always be certain that the Church founded by Our Lord can never fail as He has promised to be with it always.”

It does not matter how desperate the situation appears, Our Lord’s promise that the Church will not fail is manifested by “the remnant holding firm to tradition,” however few in number.

This infallible rule for discerning the truth is consistent with what the Church has always taught, as evidenced by the eloquent words of the saints:

In many ways, the attacks on tradition in our own day are much more obvious than they were during the time of the Arian heresy. Today we are not divided by a complicated theological matter. Instead, so many can no longer tell the difference between a healthy tree and its delightful fruit on the one hand, and a diseased tree and its putrid fruit on the other. Tragically, those Catholics who choose the wholesome fruits of Catholic tradition find themselves in a small, and increasingly persecuted, minority.

Once a dedicated enemy of the Church convinces an otherwise faithful Catholic to remain silent, he has effectively recruited a powerful ally.

In fairness to those who appear to be blind to reality, though, the enemies of the Church knew that if they had enough infiltrators in high positions they could carry out their stupefying deception. The Permanent Instruction of the Alta Vendita sets forth this Freemason tactic explicitly:

“You will contrive for yourselves, at little cost, a reputation as good Catholics and pure patriots. This reputation will put access to our doctrines into the midst of the young clergy, as well as deep into the monasteries. In a few years, by the force of things, this young clergy will have overrun all the functions; they will form the sovereign’s council, they will be called to choose a Pontiff who should reign. And this Pontiff, like most contemporaries, will necessarily be more or less imbued with the [revolutionary] Italian and humanitarian principles we are going to begin to put into circulation.”

Given the tremendous success of their efforts, why would the Church’s enemies not employ the same methods today?

Despite these tactics, surely many more faithful Catholics would resist the anti-Catholic errors if they did not see so many others going along with the novelties. But once a dedicated enemy of the Church convinces an otherwise faithful Catholic to remain silent, he has effectively recruited a powerful ally. In a real sense, the silence of a good Catholic is the most persuasive indication that there is no problem with the error in question. So the heretical consensus spreads, in much the same way that most of the world was convinced by the silence of good doctors (who knew better) that we all needed to wear masks, endure lockdowns, and receive as many vaccines as they told us to get.

Cardinal Müller’s interview shows the only way to overcome this heresy of the greatest number. Those who know the truth must cooperate with God’s grace to find the fortitude to tell the truth, even if it means martyrdom. As Michael Davies wrote, this is simply the way Christianity has always been:

“Christianity is not a religion which can compromise and survive. Its Founder died a lonely death upon the Cross. Thousands of its members were expected to undergo a cruel death in the Roman arenas rather than burn a small bowl of incense before a statue of the Emperor.”

Today it seems that we have reached the point at which bishops need to reflect on whether their silence amounts to burning incense before all that Francis has come to represent: Pachamamas, LGTBQ masses, persecution of faithful Catholics, support of the globalists, religious indifferentism, and so many other manifestations of unholy ugliness. Their silence tells their flocks that the Faith really can change to embrace all that Satan proposes.

It is obviously not a question of who will win: God will triumph. But how many souls will be lost because the shepherds’ silence convinced them that the greater number of Catholics are correct in abandoning what the Church has always taught? St. Athanasius’s words to his brother bishops are more important now than then:

“Our Canons and our forms were not given to the Churches at the present day, but were wisely and safely transmitted to us from our forefathers. Neither had our faith its beginning at this time, but it came down to us from the Lord through His disciples. That therefore the ordinances which have been preserved in the Churches from old time until now, may not be lost in our days, and the trust which has been committed to us required at our hands: rouse yourselves, brethren, as being stewards of the mysteries of God, on seeing them now seized upon by aliens.”

May God bless and reward Cardinal Müller and those who will stand against the Church’s enemies. They, and we, are not alone, for we stand with the Blessed Virgin Mary and all the saints.

Our Lady, Queen of the Most Holy Rosary, pray for us!

Related from RTV — THE GREAT RESIST: From Cardinal Müller to Giorgia Meloni & from Musk to Putin

[Comment Guidelines - Click to view]
The Remnant values the comments and input of our visitors. It’s no secret, however, that trolls exist, and trolls can do a lot of damage to a brand. Therefore, our comments are heavily monitored 24/7 by Remnant moderators around the country.  They have been instructed to remove demeaning, hostile, needlessly combative, racist, Christophobic comments, and streams not related to the storyline. Multiple comments from one person under a story are also discouraged. Capitalized sentences or comments will be removed (Internet shouting).
The Remnant comments sections are not designed for frequent personal blogging, on-going debates or theological or other disputes between commenters. Please understand that we pay our writers to defend The Remnant’s editorial positions. We thus acknowledge no moral obligation whatsoever to allow anyone and everyone to try to undermine our editorial policy and create a general nuisance on our website.  Therefore, Remnant moderators reserve the right to edit or remove comments, and comments do not necessarily represent the views of The Remnant.
back to top
Last modified on Saturday, October 15, 2022
Tweet