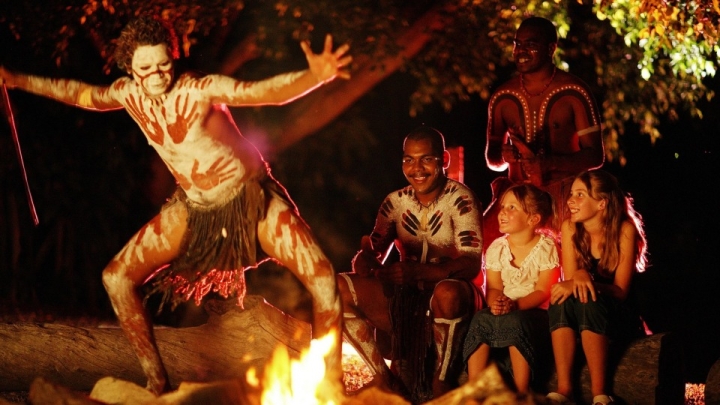 While many Catholics were distressed to see pagan rituals being performed at Australia’s Plenary Assembly, most are unaware of the proliferation of indigenous spirituality within the Catholic school system.  Australian dioceses are quietly using formal programs to indoctrinate young children in the ways of indigenous spirituality, while simultaneously destroying their Christian faith.

One program, known as “Fire Carriers”, currently runs in more than one hundred Catholic schools around Melbourne alone and enlists school principals, teachers and students to promote indigenous culture and spirituality. The program has been running for over a decade. And was implemented in the Melbourne Archdiocese and the Sandhurst Diocese through their Aboriginal Catholic Ministry departments.

“FIRE” is an acronym for “Friends Igniting Reconciliation through Education”, but its promoters play down the fact that for Aboriginals, fire “represents the spiritual connection between individuals to Mother Earth and Ancestors”. The program is based on the concept of “Reconciliation”: a political term which presents Aboriginals as victims of white colonialism and emphasizes a need for the institutional recognition of Aboriginal culture. The use of the term “reconciliation” is ironic since many Catholic school children would be unaware of that word’s sacramental significance.

Pope John Paul II was no doubt unaware that the indigenous version of “responsible parenthood” relied on the practise of infanticide. Modern historians tend to omit that anthropological quirk, as they similarly overlook evidence of the ritual tribal feasting on the bodies of murdered babies.

According to a youtube video made in 2020, the program was developed to bring “Aboriginal culture, history and spirituality into the forefront of education in Catholic schools.” In the video, put out by the Archdiocese of Melbourne, a spokesman for the Aboriginal Catholic Ministry states that her organization’s role is to “inculturate the Church in Australia”.

Unsurprisingly, the program’s creators justified their mission by relying on a statement made by Pope John Paul II during his 1986 Australian tour. While visiting the central Australian town of Alice Springs, the Pontiff said, addressing Aboriginals and Torres Strait Islanders:

“And the Church herself in Australia will not be fully the Church that Jesus wants her to be until you have made your contribution to her life and until that contribution has been joyfully received by others.”

The Pope’s statements from that tour have been used to defend all manner of syncretic liturgies and outreaches for almost forty years. He is often quoted by those who conveniently overlook other statements the Pontiff made, notably his clear teaching on the evils of abortion and his ex cathedra prohibition on the ordination of women.

Schools which successfully implement the program commit to promoting an “Aboriginal perspective” in every part of the curriculum.

John Paul II’s highly-acclaimed Statement, which is rumored to have been written for him by members of the progressive Missionaries of the Sacred Heart, contains enough theological timebombs to make Fr Schillebeeckx blush. Promoting the romantic, highly-sanitized version of Aboriginal culture, the statement emphasizes that Aboriginal “culture, which shows the lasting genius and dignity of your race, must not be allowed to disappear….Your songs, your stories, your paintings, your dances, your languages, must never be lost.”

Missing from that list of cultural hallmarks was Aboriginal phallus worship, wife-swapping and cannibalism. Pope John Paul II was no doubt unaware that the indigenous version of “responsible parenthood” relied on the practise of infanticide. Modern historians tend to omit that anthropological quirk, as they similarly overlook evidence of the ritual tribal feasting on the bodies of murdered babies.

Worse than a misplaced emphasis on indigenous culture is the program’s brazenly stated purpose of bringing indigenous spirituality “into the forefront.”

Schools which successfully implement the program commit to promoting an “Aboriginal perspective” in every part of the curriculum. Worse than a misplaced emphasis on indigenous culture is the program’s brazenly stated purpose of bringing indigenous spirituality “into the forefront.”  In an official covenant made between schools and the program, the schools promise to  “respect the spiritual connection” Aboriginals have “to Mother Earth through the Dreaming.” Remember, these are Catholic schools, promising in one breath to uphold the Catholic ethos then in the next, honoring the spirituality of those “connected to ‘Mother Earth.’“

The program was designed to become part of a school’s core teaching so that it would remain in the curriculum, even as teachers come and go. Teachers who wish to become part of the “Fire Carriers” programme are invited to a cultural immersion experience, then afterwards to form networks with like-minded educators. For the immersion experience, the teachers travel to a site held sacred by Aboriginals to “touch the sacredness” of pagan spirituality. Participants claim they can feel “the deep spirit of the land” during the immersion.

After the immersion, the next stage is to make the teachers and students “keepers of a sacred ceremony” - the Fire Ceremony.

Children are also given immersion experiences in the bush which program developers insist is vital for learning about Aboriginal life and its spirituality. The experience is said to “immerse the child’s spirit into the land”, an idea which has no relationship whatsoever to Christianity.

After the immersion, the next stage is to make the teachers and students “keepers of a sacred ceremony” - the Fire Ceremony. This is a kind of initiation ritual, again, without any Christian basis. According to the mother of a Catholic school student, the children are made to chant, “May the spirits of the fire be with us” before touching the cheeks of the next person to symbolically “spread the fire.”

It hardly needs to be pointed out that these teachers and children are taking part in a formal pagan ritual that is deceiving them and endangering their souls. The consequences of an entire school participating in the invoking of demonic entities are frightening.

The development of this indigenous curriculum is yet another example of the willingness shown by “Modernist” proponents of paganism to adapt the “rad-trad” version of their religions for the contemporary world, in order to deviously spread their lies, with the advantage of making a quick buck on the side. A plethora of companies have sprung up in recent times, offering immersion experiences for schools, businesses, organizations, and government departments. To give an idea of the financial toll this is taking on parents and tax-payers, one company charges AUD $2000 per child for a school immersion experience lasting for 6-7 days.

Once the children have engaged in the fire ritual, they are encouraged to pass their knowledge on to the next cohort of students, and to educate their family and wider community about Aboriginal culture.

Once the children have engaged in the fire ritual, they are encouraged to pass their knowledge on to the next cohort of students, and to educate their family and wider community about Aboriginal culture. Staff and students are then encouraged to engage in events and activities such as raising the Aboriginal Flag, encouraging the use of Aboriginal liturgy, acknowledging “traditional custodians”, raising money for Aboriginal students (even though they are generously subsidized by the government) and honoring Aboriginal significant days through prayer. It goes without saying that children are also encouraged to become little Eco-fascists: recycling, shunning plastic straws, going without lights and so on are all encouraged as ways of nurturing “Mother Earth.”

As another example of the dangerous spiritual practices being employed in “Fire Carrier” schools, the guidelines for the Sandhurst Diocese specifically recommend that students be taught about totems and that they adopt a totemic animal for their classroom. For the Aboriginals, a totem is an actual spiritual entity, a descendant from the heroes of the Dreamtime. In other words, a totem is a demon that children personally invoke and attach to their class.

In the “Fire-Carriers” video, former coordinator of the Aboriginal Catholic Ministry, Vicki Clark, expressed her regret that some teachers stand by Catholic teaching and refuse to implement the program in their schools. She said that some teachers “feel uncomfortable” and that it is “wrong” to be implementing the program. With so many schools falling for this syncretic deception, it provides a little comfort to know that there are still some teachers around who understand the basics of the Catholic Faith.

No pagan culture should ever be promoted over that history and culture which grew out of the teachings of Jesus Christ. It is absurd to compare the backward culture of indigenous Australians, one which could not even invent the wheel, with the achievements of Christendom, the basis of our Western civilisation. No religion or spirituality should ever be promoted in schools which call themselves Catholic, and obviously, no children or adults should be taking part in such spiritually harmful practices as invoking demons.

“Fire Carriers” teaches children to value Aboriginal spirituality at least as highly as their Catholic faith. The next generation deserves more than an education based on religious indifferentism, confusion and deception: it deserves to know the Truth.

[Comment Guidelines - Click to view]
The Remnant values the comments and input of our visitors. It’s no secret, however, that trolls exist, and trolls can do a lot of damage to a brand. Therefore, our comments are heavily monitored 24/7 by Remnant moderators around the country.  They have been instructed to remove demeaning, hostile, needlessly combative, racist, Christophobic comments, and streams not related to the storyline. Multiple comments from one person under a story are also discouraged. Capitalized sentences or comments will be removed (Internet shouting).
The Remnant comments sections are not designed for frequent personal blogging, on-going debates or theological or other disputes between commenters. Please understand that we pay our writers to defend The Remnant’s editorial positions. We thus acknowledge no moral obligation whatsoever to allow anyone and everyone to try to undermine our editorial policy and create a general nuisance on our website.  Therefore, Remnant moderators reserve the right to edit or remove comments, and comments do not necessarily represent the views of The Remnant.
back to top
Last modified on Wednesday, August 3, 2022
Tweet

More in this category: « Viganò on the Pope’s Visit to Canada A RARE OCCURRENCE: Latin Mass at the High Altar, Chartres Cathedral »