QUID EST VERITAS: What did the Pope Really say to the President? 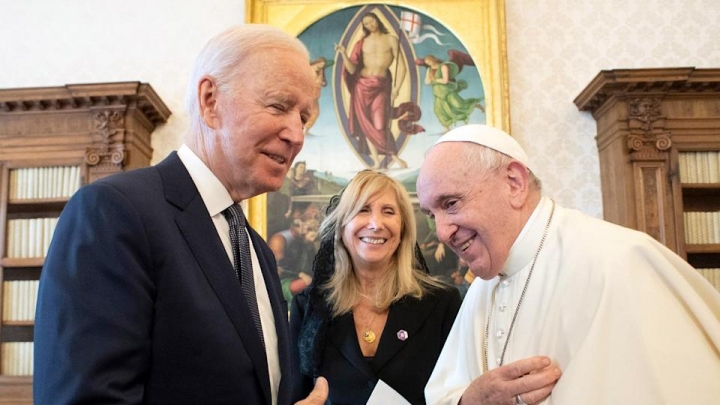 President Joe Biden does not have a reputation as a “truth-teller.”  Mr. Biden said the armed forces generals all told him to pull out of Afghanistan without leaving a small force.  Under oath in testifying to Congress the top generals contradicted the President.   Mr. Biden didn’t really visit the border, as he claimed in a recent town hall.  He only drove by.  It’s been proven he did not visit the Tree of Life synagogue after the massacre as he claimed.  Newsweek magazine calls it “tortured logic” that allows Joe Biden to claim that his plan $3.5 trillion “Build Back Better” bill will “Cost Zero Dollars.”    The Washington Post has even given up on fact-checking President Biden.

So when Joe Biden says the Pope told him he is a good Catholic and he should continue to receive the Holy Eucharist are we to believe him?  Were Benedict still in the Chair of Peter, the unequivocal answer would be "sure, it's another Presidential falsehood" but, sadly, with the current Chair-filler one might have to give Biden the benefit of the doubt.  As Robert Royal points out in his recent essay, The Pope and the President, “The Vatican press office has not denied Biden’s account and has only said that it was a private conversation. And that it doesn’t comment on private conversations.”

While our church may have Synods, we don’t have Congressional hearings and we can’t put the Holy Father under oath to learn what was said at that meeting.

Might Pope Francis have said something to Joe Biden that could be interpreted as “You're a good Catholic.  Of course you should receive Communion.”  Here again, look at the record.  The current Holy Father has been confusing and confounding the faithful for nearly a decade now with amorphous or ambiguous comments.  Famously in July of 2013 he made his “Who am, I to judge?” statement broadly interpreted as defending homosexuality.  Did he really imply, in 2015, that there is no hell but rather souls who reject God are annihilated?   For chapter upon chapter about the current Supreme Pontiff’s obfuscation, curious comments, ignoring facts, and lack of cohesion, read “To Change the Church” by Ross Douthat or Philip Lawler’s “Lost Shepherd.”

While our church may have Synods, we don’t have Congressional hearings and we can’t put the Holy Father under oath to learn what was said at that meeting.  But let’s pretend that Cardinal Raymond Burke -- even though apparently the good Cardinal might be banned from the Vatican due to his vaccination status -- were in that Vatican meeting between the President and the Pope. The Cardinal could have explained to both other gentlemen quod verum est -- what the truth is.

Fortunately, we don’t have to imagine what Cardinal Burke would have said because, ironically, or more likely providentially, on the same day as the President’s questionable declaration, Cardinal Raymond Burke issues his statement “Catholic Politicians and Non-Admittance to Holy Communion.”  Cardinal Burke in his 2,800 word document makes quite clear the church’s teaching.

He recounts the struggle among the Catholic hierarchy in the United States for more than 17 years over the question of the worthiness of pro-abortion politicians to receive the Holy Eucharist.  Bringing us to the present day discussion in the Bishops’ Conference.

According to His Eminence, when he became Archbishop of Saint Louis the media started to question his practice as Bishop of La Crosse of denying communion to Catholic politicians in favor of abortion – but only after attempting to speak with them privately about their errors.  Would that Pope Francis used his recent “private conversation” with President Biden and also a prior recent meeting with Speaker Nancy Pelosi to correct their errors privately.

The Cardinal wrote “I admonished Senator Kerry not to present himself to receive Holy Communion because, after having been duly admonished, he persisted in the objectively grave sin of promoting directly procured abortion. I was not the only Bishop to admonish him thus.”

The Cardinal is correct, of course.  In fact, a 2004 decree, “Worthy to Receive the Lamb: Catholics in Political Life and the Reception of Holy Communion,” established the policy for the Dioceses of Charlotte and Charleston and Archdiocese of Atlanta.  In their decree, the late Archbishop John F. Donoghue, Bishop Robert J. Baker and Bishop Peter J. Jugis plainly state “ Because of the influence that Catholics in public life have on the conduct of our daily lives and on the formation of our nation’s future, we declare that Catholics serving in public life espousing positions contrary to the teaching of the Church on the sanctity and inviolability of human life, especially those running for or elected to public office, are not to be admitted to Holy Communion in any Catholic church within our jurisdictions: the Archdiocese of Atlanta, the Dioceses of Charleston and Charlotte. Only after reconciliation with the Church has occurred, with the knowledge and consent of the local bishop, and public disavowal of former support for procured abortion, will the individual be permitted to approach the Sacrament of the Holy Eucharist.” It was based on that order that then-candidate Joe Biden was denied Communion in South Carolina in 2019.

One very high placed, non-Catholic federal official told His Eminence that he had concluded that the Church’s teaching on abortion “could not be that firm, since he could name 80 or more Catholics in the Senate and House of Representatives, who regularly support pro-abortion legislation.”

In their June 2004 meeting the United States Conference of Catholic Bishops debated the topic with then Cardinal Theodore McCarrick “clearly opposed to the application of can. 915 [sic] in the case of Catholic politicians supporting procured abortion and other practices which gravely violate the moral law.” according to Cardinal Burke. “Can 915” referred to by the Cardinal is Canon lawyer lingo for section 915 of Canon Law and in typical bureaucratic fashion the Conference kicked the can (in this case “can. 915”) down the road by assigning the question to a committee headed by the man who is now Archbishop of Washington, D.C.

Cardinal Burke went on to give a vivid example of the scandal and confusion caused by pro-abortion Catholic politicians.  One very high placed, non-Catholic federal official told His Eminence that he had concluded that the Church’s teaching on abortion “could not be that firm, since he could name … 80 or more Catholics in the Senate and House of Representatives, who regularly support pro-abortion legislation.”

Cardinal Burke points out “that the pastoral action taken had nothing to do with interfering in politics. It was directed to the safeguarding of the sanctity of the Holy Eucharist, to the salvation of the souls of the Catholic politicians in question – who were sinning gravely not only against the Fifth Commandment but also were committing sacrilege by receiving unworthily Holy Communion – and to the prevention of the serious scandal caused by them.”

Currently, the USCCB is again discussing non-admittance to Holy Communion by pro-abortion Catholic politicians and has issued a draft statement.

The Cardinal reveals that then Cardinal Joseph Ratzinger (who became Pope Benedict the XVI) had issued a letter to the bishops of the United States in his role as Perfect of the Congregation for the Doctrine of the Faith, explaining in clear terms the Catholic teaching on this issue.  The letter was to have been distributed to all Bishops in the United States, but never was.  The letter, which “sets forth in an authoritative manner the Church’s constant teaching and practice” is not available from the Vatican or the USCCB, but can be found on popular blogs such as this one.

Currently, the USCCB is again discussing non-admittance to Holy Communion by pro-abortion Catholic politicians and has issued a draft statement.  Towards the end of the 26-page draft, the document says:  We repeat what the U.S. Bishops stated in 2006: If a Catholic in his or her personal or professional life were knowingly and obstinately to reject the defined doctrines of the Church, or knowingly and obstinately to repudiate her definitive teaching on moral issues, however, he or she would seriously diminish his or her communion with the Church. Reception of Holy Communion in such a situation would not accord with the nature of the Eucharistic celebration, so that he or she should refrain. Reception of Holy Communion in such a situation is also likely to cause scandal for others.

In closing his missive Cardinal Burke was much more direct.  He invites us all to pray “for the Church in the United States of America and in every nation, that, faithful to the mission of Christ, her Bridegroom, she will be faithful, limpid and uncompromising in the application of can. 915, defending the sanctity of the Holy Eucharist, safeguarding the souls of Catholic politicians who would grievously violate the moral law and still present themselves to receive Holy Communion, thereby committing sacrilege, and preventing the most serious scandal caused by the failure to observe the norm of can. 915.”

[Comment Guidelines - Click to view]
The Remnant values the comments and input of our visitors. It’s no secret, however, that trolls exist, and trolls can do a lot of damage to a brand. Therefore, our comments are heavily monitored 24/7 by Remnant moderators around the country.  They have been instructed to remove demeaning, hostile, needlessly combative, racist, Christophobic comments, and streams not related to the storyline. Multiple comments from one person under a story are also discouraged. Capitalized sentences or comments will be removed (Internet shouting).
The Remnant comments sections are not designed for frequent personal blogging, on-going debates or theological or other disputes between commenters. Please understand that we pay our writers to defend The Remnant’s editorial positions. We thus acknowledge no moral obligation whatsoever to allow anyone and everyone to try to undermine our editorial policy and create a general nuisance on our website.  Therefore, Remnant moderators reserve the right to edit or remove comments, and comments do not necessarily represent the views of The Remnant.
back to top
Last modified on Sunday, November 14, 2021
Tweet
More in this category: « UNITE the CLANS: Michael Matt on Traditiones Custodes & Resistance How the Modernists and Francis Turn Catholic Foundations into Sand »