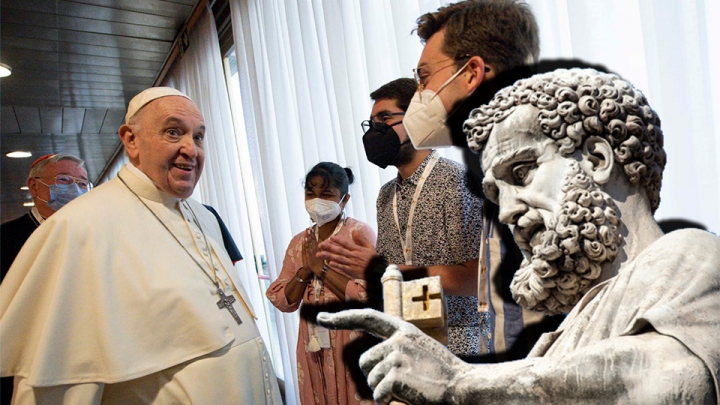 We are Catholics who seek to honor God and save our souls by following our Catholic Faith, which we know was handed down by Jesus Christ to His disciples and faithfully transmitted through the ages despite the constant attacks of those who hate God and His Catholic Church.  The Church has always responded to these attacks on its immutable teaching by defining the truths of the Faith to render them plainly clear to all men of good will and immune to legitimate misinterpretation.

Despite these efforts to defend the Church, deceitful men have persisted in their efforts to infiltrate the Catholic Church for the purpose of changing its teaching to something it can never be. Pope St. Pius X, among other holy popes, saw this danger and issued his Oath Against Modernism in 1910. This Oath, which was sworn by all clergy, pastors, confessors, preachers, religious superiors, and professors in philosophical-theological seminaries until it was abrogated by Pope Paul VI, clearly set forth one of the most fundamental realities of the Catholic Faith:

“I sincerely hold that the doctrine of faith was handed down to us from the apostles through the orthodox Fathers in exactly the same meaning and always in the same purport. Therefore, I entirely reject the heretical misrepresentation that dogmas evolve and change from one meaning to another different from the one which the Church held previously. I also condemn every error according to which, in place of the divine deposit which has been given to the spouse of Christ to be carefully guarded by her, there is put a philosophical figment or product of a human conscience that has gradually been developed by human effort and will continue to develop indefinitely.”

Although it is self-evident that truth cannot contradict truth, we now face an increasingly nonsensical situation in which those occupying the highest positions of the Catholic Church, including Pope Francis, routinely promote ideas that have been long-condemned by the Catholic Church.

With this Oath, St. Pius X simply made clear what no Catholic can logically doubt. Indeed, in his letter to the Galatians, St. Paul unambiguously presented the same principle: “But though we or an angel from heaven preach a gospel to you besides that which we have preached to you, let him be anathema” (Gal. 1:8). If dogmas of the Faith could change meaning over time, the Faith could not possibly be from a God who, as we say in the Act of Faith, “can neither deceive nor be deceived.” As such, a religion that would change in such a manner could in no way command the assent of a well-formed conscience, for it would be based on fleeting sentiment and evolving understanding rather than the truth of God.

Although it is self-evident that truth cannot contradict truth, we now face an increasingly nonsensical situation in which those occupying the highest positions of the Catholic Church, including Pope Francis, routinely promote ideas that have been long-condemned by the Catholic Church. All people of sound mind can readily discern that these usurpers cannot possibly speak for a Church that has claims to inerrancy when they set forth ideas that boldly and unambiguously contradict what the Church has always taught. Either these men are deceivers or the entire Faith is man-made with no legitimate claims to divine origin. There is no other possibility.

Because these infiltrators understand the implications of their anti-Catholic novelties, they likewise understand that they are perpetrating an enormous fraud on the entire world, particularly those who seek to practice the Faith as it has been practiced for nearly two thousand years. Even if the Catholic Faith were false, this deception would immediately strip these men of all legitimate claims to moral authority. They are, indeed, using the reputation, property, funds, and membership of the Catholic Church to promote ideas that have been consistently rejected by the Catholic Church since its inception. These men are frauds and criminals.

As Catholics wishing to remain faithful to the immutable Catholic Faith, we implore the deceivers to reject their impious errors and clearly teach the actual religion they pretend to represent.

Faced with such a grave situation, we affirm, and call on all faithful Catholics to affirm, the following Catholic beliefs that are today under unparalleled assault from the deceivers:

As Catholics wishing to remain faithful to the immutable Catholic Faith, we implore the deceivers to reject their impious errors and clearly teach the actual religion they pretend to represent. If they refuse to reject their errors, we insist that they immediately cease representing themselves as leaders of the Catholic Faith. Because, however, we recognize that many of these deceivers are deliberately seeking to destroy the Catholic Church and will not cease until forced to do so, we beg God to intervene to cast these imposters from the places in the Church they occupy through malice and deception.

And as we know that some evils are not cast out but by prayer and fasting, we join our prayers, especially the Rosary, and penance to this declaration.

We beg the Blessed Virgin Mary, Mediatrix of All Graces, to intercede for us so that we may be made worthy of the promises of Christ.

[Comment Guidelines - Click to view]
The Remnant values the comments and input of our visitors. It’s no secret, however, that trolls exist, and trolls can do a lot of damage to a brand. Therefore, our comments are heavily monitored 24/7 by Remnant moderators around the country.  They have been instructed to remove demeaning, hostile, needlessly combative, racist, Christophobic comments, and streams not related to the storyline. Multiple comments from one person under a story are also discouraged. Capitalized sentences or comments will be removed (Internet shouting).
The Remnant comments sections are not designed for frequent personal blogging, on-going debates or theological or other disputes between commenters. Please understand that we pay our writers to defend The Remnant’s editorial positions. We thus acknowledge no moral obligation whatsoever to allow anyone and everyone to try to undermine our editorial policy and create a general nuisance on our website.  Therefore, Remnant moderators reserve the right to edit or remove comments, and comments do not necessarily represent the views of The Remnant.
back to top
Last modified on Tuesday, October 12, 2021
Tweet
More in this category: « GLOBAL DARKNESS: Michael Matt Interviews Bishop Schneider From Lepanto to Davos: What Hath Modernism Wrought »