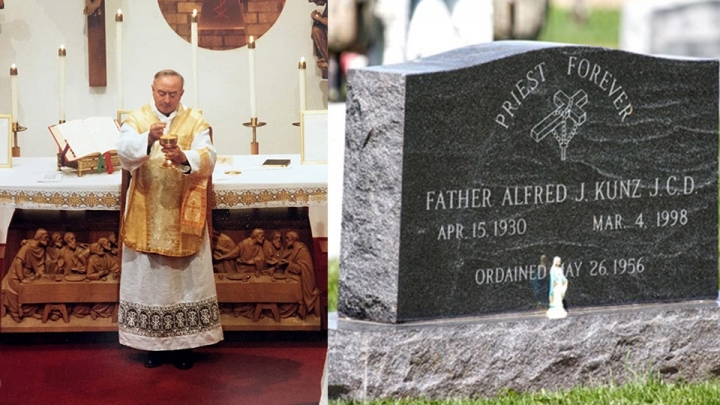 Recent headlines involving Pope Francis and the Traditional Latin Mass remind me of a case I’ve been following for quite some time: the unsolved murder of Father Alfred Kunz, a priest and canon law expert of the Diocese of Madison, Wis., who was known for celebrating the TLM.

The staunchly orthodox and pro-life Kunz was seen as a polarizing figure in the community. A number of Catholics held him in high regard, including Cardinal Raymond Burke, who wrote in an email to me in response to a very similar article I wrote for RenewAmerica, and subsequently sent to him, earlier this year: “Thank you for remembering me with your excellent article on the occasion of the twenty-third anniversary of the death of Father Alfred Kunz. May he rest in peace. The article is a worthy tribute to Father Kunz.”

Others, especially the more “progressive” Catholics, were not too fond of Kunz’s embrace and promotion of traditionalism.

On the morning of March 4, 1998, Kunz’s body was found in a large pool of blood in the hallway of the parish school. His throat had been slashed and he was left to bleed out.

There have been various theories put forth as to the killer's motive, some more plausible than others. An interrupted burglary is one theory. Jealousy or betrayal is another. A satanic cult is another. Kunz’s personal investigations into clergy corruption – he was an adviser to Catholic activist Stephen Brady, founder of The Roman Catholic Faithful -- is yet another.

For several years, at least one detective, Kevin Hughes, now retired, believed the school teacher who discovered Kunz's body, Brian J. Jackson, committed the murder. Jackson, then in his mid-20s, reportedly had a strained relationship with Kunz in the weeks leading up to the murder and was interviewed by the Dane County Sheriff’s Office on multiple occasions (see here, here and here) and was heavily scrutinized. However, according to an email sent by the sheriff’s office to me in 2018, “Brian Jackson is no longer the primary target of the investigation.”

When approached at his home by a reporter from the Milwaukee Journal Sentinel — whose investigative journalist, Gina Barton, did a series of podcasts and articles on the case in 2019 that included an interview of me (Barton now works as an investigative reporter at USA Today) — Jackson professed his innocence but politely declined to be interviewed in detail by the media outlet. 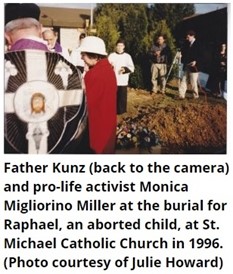 Jackson did have a seemingly close friendship with another Wisconsin-based priest, Father Charles Fiore, who was a good friend of Kunz and Catholic author Malachi Martin, who died in 1999. Fiore, the last known person to see Kunz alive, died in 2003 of natural causes. (Jackson was remembered in Fiore’s will and was left $10,000.)

Jackson subsequently moved out of Wisconsin and got married. In 2009 he and his young children experienced their own tragedy when his wife passed away unexpectedly, reportedly as a result of an undetected heart condition. Interestingly, I first found out about Jackson’s wife’s death in an email from Hughes, who typically (and understandably) gave out very little information about the investigation. Hughes retired from the sheriff’s office in 2011 after 33 years of service.

The sheriff's office has also stated that the principal of St. Michael School at the time of Kunz's murder, Maureen (O'Leary) Schultheis, was uncooperative and even told investigators to close the case and mark it unsolved. In a 2018 interview with Catholic writer Joseph M. Hanneman for Catholic World Report, Schultheis denied being uncooperative, insisting “she spent countless hours meeting with investigators.”

In 2006, I reported that a deceased rape suspect, Joseph Donald Cavanaugh, might have been the killer. Hanneman reported in 2019 that Cavanaugh, who died by suicide in 2002 after being charged with sexual assault and other felonies, has been ruled out as a suspect.

The satanic cult theory was espoused by Malachi Martin.

‘He was found at 7 o'clock in the morning with his throat cut from ear to ear,’ Martin said on a national radio program in May 1998. ‘In his own blood, face down into it and with various acts of desecration of his body which are normally associated with satanist-inflicted death.’

The author of Hostage to the Devil, The Keys of This Blood, Windswept House, and more than a dozen other books said Kunz consulted with him on exorcisms. The country priest was ‘picked off’ by someone who wanted to permanently silence him, Martin said. He referred to the murder as the ‘assassination of Christ's hero.’….

There is one major problem with the Father Martin's theory: one of its base premises was false. Kunz's body did not have injuries that would lead investigators to suspect a ritual or satanic killing, according to Dane County Sheriff David J. Mahoney. Kunz's throat was not cut ‘ear to ear,’ as many stories claimed. The throat slash was more to one side, and it severed the carotid artery. There were no other stab wounds and no desecration or mutilation of the body, according to Mahoney.

It's unclear where Martin and other friends, like Father John A. Hardon, SJ, got information that led them to conclude the killer's motivation was Kunz's work as an exorcist, or his efforts to expose pederasty in the priesthood. But convinced they were. In remarks to his students just one week after Kunz's murder, Hardon said: ‘I don't know if they will ever reveal...why he was murdered, but I think I can safely say he was not just murdered, he was martyred. Oh, how much I could say. That's the kind of priest we need today, who shed their blood for what they believe and not be afraid, not be afraid of human beings, and least of all be afraid of dying, out of love for and loyalty to Jesus Christ.’

The theory more recently espoused by a Wikipedia vandal that Kunz may have molested one of the children at the parish school was refuted by Kerry Porter of the sheriff's office in 2019, who wrote in an email to me that “there is no evidence to support the claim made concerning molestation.”

And Brent M. King, director of communications for the diocese, wrote in a Feb. 25, 2021 email to me:

The Diocese of Madison has not received any credible allegation of sexual misconduct with regard to Father Alfred Kunz. We've worked closely with the Dane County sheriff in hope of helping solve his murder and have learned of much of the gossip and rumor, as well as sometimes-wild theories, through those interactions or through the media over the years.

In 2019, the diocese requested the assistance of veteran agents of the FBI to help scrutinize our clergy files (living and deceased) regarding these matters. Following that review we did add one name to our list of those with credible accusations against them.

Our Lady of Fatima, pray for us.

Matt C. Abbott is a Catholic commentator with a Bachelor of Arts degree in communication, media and theatre from Northeastern Illinois University. He also has an Associate in Applied Science degree in business management from Triton College. Abbott has been interviewed on MSNBC, Bill Martinez Live, WOSU Radio in Ohio, the Milwaukee Journal Sentinel's 2019 ‘Unsolved’ podcast about the unsolved murder of Father Alfred Kunz, WLS-TV (ABC) in Chicago, WMTV (NBC) and WISC-TV (CBS) in Madison, Wis., and has been quoted in The New York Times, the Chicago Tribune and other media outlets. He is mentioned in the 2020 ‘Report on the Holy See's Institutional Knowledge and Decision-Making Related to Former Cardinal Theodore Edgar McCarrick (1930 to 2017),’ which can be found on the Vatican's website. He can be reached at This email address is being protected from spambots. You need JavaScript enabled to view it..

[Comment Guidelines - Click to view]
The Remnant values the comments and input of our visitors. It’s no secret, however, that trolls exist, and trolls can do a lot of damage to a brand. Therefore, our comments are heavily monitored 24/7 by Remnant moderators around the country.  They have been instructed to remove demeaning, hostile, needlessly combative, racist, Christophobic comments, and streams not related to the storyline. Multiple comments from one person under a story are also discouraged. Capitalized sentences or comments will be removed (Internet shouting).
The Remnant comments sections are not designed for frequent personal blogging, on-going debates or theological or other disputes between commenters. Please understand that we pay our writers to defend The Remnant’s editorial positions. We thus acknowledge no moral obligation whatsoever to allow anyone and everyone to try to undermine our editorial policy and create a general nuisance on our website.  Therefore, Remnant moderators reserve the right to edit or remove comments, and comments do not necessarily represent the views of The Remnant.
back to top
Last modified on Sunday, August 22, 2021
Tweet
More in this category: « CARDINAL VIRTUE: Burke Suffers for the Unborn Making Sense of Francis, the Destroyer »