Carlo Maria Viganò: “To stand at the foot of the Cross, as we witness the Passion of the Church” – The Duty of Catholics today 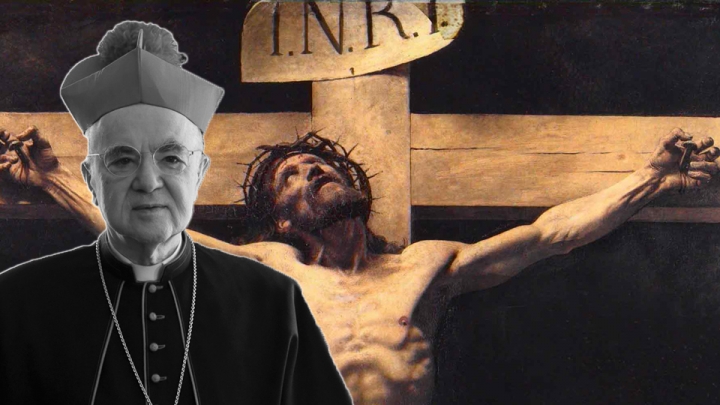 I was moved when I read your reflections on the state of the Church and on the “migration” of Catholics from a dying reality to a new, more combative and guerilla dimension, as you wrote, using an image taken from a well-known radio meditation given by the young Joseph Ratzinger.

The Church is not over and will not end.

This “migration” is not a migration out of the Mystical Body to a human and utopian reality created in the minds of those who lament the loss of the past and are disgusted with the present. Because if this were our temptation, we would be committing a betrayal of the Church herself, separating ourselves from her and thus precluding our salvation, which She alone ensures to her members. Ponder that paradox, dear Aldo Maria: precisely those who proclaim that they are proudly faithful to the immutable Catholic Magisterium would thus be constructing a [false] oasis, without recalling that we are all exsules filii Evae, and that we make our way across this vale of tears gementes et flentes.

The Church is not over and will not end. We know that this terrible crisis, in which we are witnessing the obstinate demolition of the little that still survives that is Catholic by those whom the Lord has established as Pastors of His Flock, marks the sorrowful Passion and Descent into the Tomb of the Mystical Body, which Providence has ordained must imitate its Divine Head in everything.

We hear Christ cry out, while the Church groans.

So it also happened under the dark sky of Jerusalem, on Golgotha, when, seeing the Son of God lifted up on the Cross, there were those who believed that the brief parenthesis of the Nazarean was over. But along with those who – out of pessimism, fear, opportunism, or open hostility – cynically observe the death rattle of the Church, there are also those who groan and have their hearts rent open before that agony, even as they know that it is the necessary, indispensable premise of the resurrection which awaits Her and all of Her members. The death rattle is terrible, just like the Lord’s cry that pierced the unbelieving silence of the Parasceve, and with it the dominion of Satan over the world. Eli, Eli, lamà sabactani! We hear Christ cry out, while the Church groans. We see the spears, the clubs, the reed with the sponge soaked in vinegar; we hear the vulgar insults of the crowd, the provocations of the Sanhedrin, the orders given to the guards, the sobs of the Pious Women.

Behold, dear Dr. Valli, today we must stand at the foot of the Cross as we witness the Passion of the Church. To stand means to remain upright, still, and faithful. Along with Mary Most Holy, the Sorrowful Mother – stabat Mater dolorosa – whom the Lord gave to us as our Mother right at the foot of the Cross in the person of Saint John, thereby making us, along with the same Beloved Disciple, children of His Mother.

We are with Saint John and the Sorrowful Virgin at the foot of a Cross on which the new High Priests spit, against which a new Sanhedrin curses and swears.

Even in the agony of seeing the pains of the Passion renewed in the Mystical Body of Christ, we know that with this last solemn ceremony of time, the Redemption is brought to completion: accomplished by the Incarnate Son of God, it must find its mystical correspondence in the Redeemed. And just as the Father was pleased to accept the Sacrifice of His Only-Begotten Son to redeem us miserable sinners, so he deigns to see the sufferings of the Passion reflected in the Church and in individual believers. Only in this way can the work of the Redemption, accomplished by Jesus Christ, true God and true Man, in the name of humanity, make us cooperators and participants. We are not passive subjects of a plan of which we are unaware, but rather we are active protagonists of our salvation and the salvation of our brothers, following the example of our Divine Head. It is in this that we may say that we are effectively a priestly people.

In the face of the desolation of these terrible times, in the face of the apostasy of the Hierarchy and the agony of the ecclesial body, we cannot be truly pessimistic or yield to despair or resignation.

Let us pray with humility, asking the Holy Spirit to give us strength in the moment of trial.

We are with Saint John and the Sorrowful Virgin at the foot of a Cross on which the new High Priests spit, against which a new Sanhedrin curses and swears. On the other hand, we recall that the leaders of the priestly class were the first ones who wanted to put Our Lord to death, and so it is not surprising that in the moment of the Passion of the Church it is precisely they who mock what the blindness of their soul no longer understands.

Let us pray. Let us pray with humility, asking the Holy Spirit to give us strength in the moment of trial. Let us multiply our prayer, penances, and fasting for those who today are among those who brandish the whip, press the crown of thorns upon the head, drive in the nails, and wound the side of the Church, just as they once did with Christ. Let us pray also for those who watch impassively or look the other way.

Let us pray for those who weep, for those who hold out a handkerchief to wipe the disfigured face, for those who carry the Cross for a while, for those who prepare a tomb, wrappings for the body, and precious balm. Exspectantes beatam spem, et adventum gloriae magni Dei, et Salvatoris nostri Jesu Christi – Awaiting the blessed hope, the coming of the glory of the great God, and Our Savior Jesus Christ (Tit 2:13).

Posted first at Duc in Altum along with the following note: Dear friends of Duc in altum, Archbishop Carlo Maria Viganò, taking a cue from my article While the Pope is in the Hospital, sent this contribution which I share with you here. We thank the archbishop, and, in his words, “we pray with humility, asking the Holy Spirit to give us strength in the moment of trial.” -Aldo Maria Valli

Published in Remnant Articles
[Comment Guidelines - Click to view]
The Remnant values the comments and input of our visitors. It’s no secret, however, that trolls exist, and trolls can do a lot of damage to a brand. Therefore, our comments are heavily monitored 24/7 by Remnant moderators around the country.  They have been instructed to remove demeaning, hostile, needlessly combative, racist, Christophobic comments, and streams not related to the storyline. Multiple comments from one person under a story are also discouraged. Capitalized sentences or comments will be removed (Internet shouting).
The Remnant comments sections are not designed for frequent personal blogging, on-going debates or theological or other disputes between commenters. Please understand that we pay our writers to defend The Remnant’s editorial positions. We thus acknowledge no moral obligation whatsoever to allow anyone and everyone to try to undermine our editorial policy and create a general nuisance on our website.  Therefore, Remnant moderators reserve the right to edit or remove comments, and comments do not necessarily represent the views of The Remnant.
back to top
Last modified on Tuesday, July 20, 2021
Tweet

More in this category: « RIGID INTOLERANCE: Why Does Francis Hate the Latin Mass? CARDINAL ZEN: Traditionis Custodes "no less severe because it was foreseen" »