WHAT THEY’RE NOT SAYING: A Response to Covid-19 in the light of Church teaching 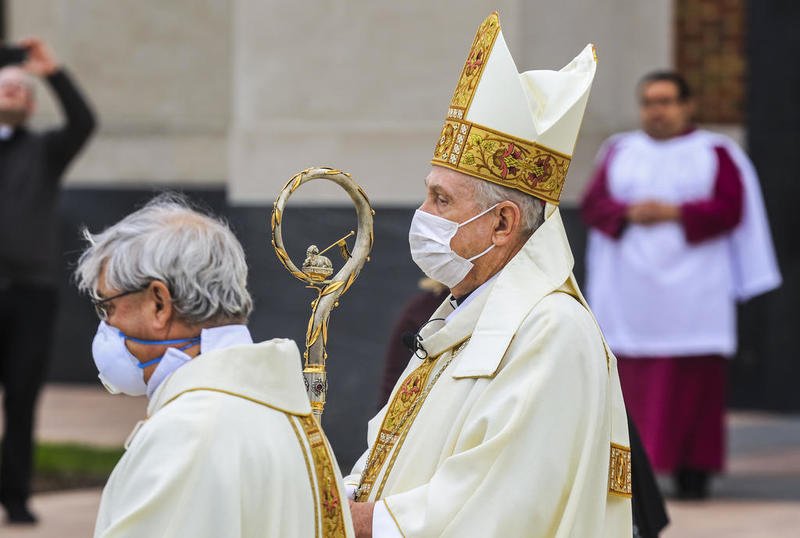 Given that the Covid-19 crisis and lockdown are demonstrably fabricated, constitutionally unprecedented, counter-cultural, globally oppressive, repressive, suppressive and depressive, it was only natural that Catholics should look to the Church, in her clergy, to raise the voice of moral objection and resistance.

What we have witnessed instead, with no little incredulity and scandal, is a clergy that has largely complied silently and submissively with unjust government legislation; first in suppressing the Mass and the Sacraments for 4 months, and now with Church re-opening rules that are, frankly, an affront to Almighty God and a violation of conscience for so many Catholics.

In fine, our clergy have turned the Church—the House of God, the House of Faith—into a House of fear and forbiddance, the very antithesis of Our Saviour's invitation: "Come to Me all ye who labour and are heavy burdened, and I will give you rest". (Matthew 11, 28).

Surely this shocking clerical capitulation to abusive civil authority renders a good many bishops and priests worthy of that Gospel condemnation of Our Lord: "But woe to you, scribes and Pharisees, hypocrites, because you shut the kingdom of heaven against men: for you yourselves do not enter in and those that are going in, you suffer not to enter..." (Matthew 23, 13).

Before expanding further on this great betrayal of our times, it is first necessary to recap on some very basic, easily obtainable, facts about Covid-19.

Fact 1. This virus has never been correctly isolated and identified using the gold standard method of science, namely, 'Koch's Postulates'. Rather, world governments have simply accepted the flawed PCR science of Communist China, a notoriously unreliable method that renders all subsequent human testing suspect and inadmissible.

Fact 2. 99.7% of the global population is relatively unaffected by this virus. Of the remaining 0.3% of global humanity, only a tiny 0.04% of the Scottish population is said to have died with or of it. In other words, we are dealing with a virus that is barely comparable with a bad flu year.

Fact 3. Professor Neil Ferguson, the architect of national lockdown, has since been discredited along with his apocalyptic computer model predicting millions of Covid-19 deaths.

Fact 4. There is no definitive scientific evidence underpinning the imposition of "social distancing", face masks and hand sanitisers. Quite the contrary, "social distancing" was plagiarised from a hypothesis written many years ago by a college student and face masks have been shown to be more dangerous than helpful to health.

Fact 5. National quarantine of the healthy as well as the sick during a viral outbreak is unprecedented in world history, it runs contrary to human reason and sound governance.

Fact 6. Secular authorities are subordinate to the authority of the Church, not the other way around. Hence any State law that declares the public cessation of holy Mass under any pretext offends against the divine law, as do clergy who obey men rather than God.

Suffice it to say that by these few facts, and there are many others, we can easily determine the two elements necessary to render the present imposition of State Covid legislation null and void in respect to both the Church and society. These are that the legislation is irrational and contrary to the eternal law.

Regarding the eternal law, the Third Commandment of the Decalogue obliges all under pain of mortal sin to keep holy the Sabbath day. The Church teaches that the fulfilment of this obligation consists primarily, though not exclusively, in assisting at Holy Mass on Sundays and Holy Days.

Throughout history the Church has witnessed many plagues and viruses, some with a devastating cost in human lives that makes Covid-19 look like a case of the sniffles.

To give just a few examples from antiquity through the middle ages up to more modern times: The Antonine plague of A.D.165 is estimated to have killed around 5 million people throughout the Roman empire. The plague of Cyprian (A.D.280), so-called after St. Cyprian, Bishop of Carthage, who thought it the end of the world, was killing 5000 people a day at its height in Rome. The plague of Justinian (A.D. 541), named after the Byzantine emperor of the time, is estimated to have killed up to 10% of the world's population. The Black Death of 1346 is said to have wiped out half the population of Europe. The Cocoliztli epidemic of 1545 killed 15 million inhabitants of Mexico and Central America. The Spanish Flu pandemic of 1918 is estimated to have killed 100 million worldwide.

For brevity' sake I have left out numerous lesser historical plagues whose death tolls have varied from around 100, 000 to 1 million, against which latter number Covid-19 does not even compare.

Suffice it to say that through the worst plagues in history all Churches remained open without restriction while priests ministered bravely to their faithful, including the sick and the dying, filled with supernatural faith and divine charity. Indeed, it is recorded in antiquity that the terrified pagans marvelled at the selfless charity of the Christians during times of plague.

With this in mind we come to a comparison with today's clergy, not to mention a very large number of faithful, who, having approved the lockdown of the House of God for 4 months, now humiliate the Church further with a sanitised faith that is a parody of Catholicism and a mockery of the spirit of the early Christians and holy martyrs.

Against this appalling capitulation in the face of evil, we read in the 1921 edition of Spirago-Clarke's Imprimatured "The Catechism Explained":

The Church is, in its own department, absolutely independent of the State, for Christ left the teaching and government of His Church to the Apostles and their successors, not to any temporal sovereign. Hence the State has no claim to dictate to Christians what they are to believe and reject, nor to instruct priests what they are to preach, nor how and when they are to give the sacraments, say Mass, etc. Such interference has always been resented by the Church..."

Laws and decrees passed in contravention of the moral order, and hence of the divine will, can have no binding force in conscience, since "it is right to obey God rather than men.”...As St. Thomas teaches, "In regard to the second proposition, we maintain that human law has the rationale of law in so far as it is in accordance with right reason, and as such it obviously derives from eternal law. A law which is at variance with reason is to that extent unjust and has no longer the rationale of law. It is rather an act of violence." (Peace on Earth, 1963, 51).

Even in the new Catechism we read as follows:

Authority does not derive its moral legitimacy from itself. It must not behave in a despotic manner, but must act for the common good as a moral force based on freedom and a sense of responsibility: A human law has the character of law to the extent that it accords with right reason, and thus derives from the eternal law. Insofar as it falls short of right reason it is said to be an unjust law, and thus has not so much the nature of law as of a kind of violence." (#1902)

Catholic Social Teaching St. Augustine: “An unjust law is no law at all.” (On Free Choice Of The Will, Book 1, § 5)

Authority is exercised legitimately only when it seeks the common good of the group concerned and if it employs morally licit means to attain it. If rulers were to enact unjust laws or take measures contrary to the moral order, such arrangements would not be binding in conscience. In such a case "authority breaks down completely and results in shameful abuse". (#1903)

The citizen is obliged in conscience not to follow the directives of civil authorities when they are contrary to the demands of the moral order, to the fundamental rights of persons or the teachings of the Gospel. Refusing obedience to civil authorities, when their demands are contrary to those of an upright conscience, finds its justification in the distinction between serving God and serving the political community. "Render therefore to Caesar the things that are Caesar’s, and to God the things that are God’s." "We must obey God rather than men." (#2242).

The one only reason which men have for not obeying is when anything is demanded of them which is openly repugnant to the natural or the divine law, for it is equally unlawful to command and to do anything in which the law of nature or the will of God is violated..."

As already clearly illustrated, the Covid-19 crisis is fabricated and the response to it is contrary to human reason, human freedom and the eternal law. Hence bishops, clergy and faithful who have in any way complied with the present evil, not recognising the demonic intelligence behind the initial suppression of the Mass followed by re-opening rules that include forbidding Holy Communion on the tongue, replacing holy water with sanitiser, taping off pews to restrict numbers, leper-like distancing with infantile face masks, including Perspex riot guards, a moratorium on kissing statues, lighting votive candles and moving around the church, will certainly not escape the just judgment of God for their faithlessness, having shown themselves more concerned with the health of the mortal body than with the health of the immortal soul.

[Comment Guidelines - Click to view]
The Remnant values the comments and input of our visitors. It’s no secret, however, that trolls exist, and trolls can do a lot of damage to a brand. Therefore, our comments are heavily monitored 24/7 by Remnant moderators around the country.  They have been instructed to remove demeaning, hostile, needlessly combative, racist, Christophobic comments, and streams not related to the storyline. Multiple comments from one person under a story are also discouraged. Capitalized sentences or comments will be removed (Internet shouting).
The Remnant comments sections are not designed for frequent personal blogging, on-going debates or theological or other disputes between commenters. Please understand that we pay our writers to defend The Remnant’s editorial positions. We thus acknowledge no moral obligation whatsoever to allow anyone and everyone to try to undermine our editorial policy and create a general nuisance on our website.  Therefore, Remnant moderators reserve the right to edit or remove comments, and comments do not necessarily represent the views of The Remnant.
back to top
Last modified on Saturday, August 29, 2020
Tweet

More in this category: « LETTER to the FRONTLINE HEROES: Viganò on COVID, Abortion, and Destruction of the Family Martyrs of the Colosseum Assist Us in Battle »