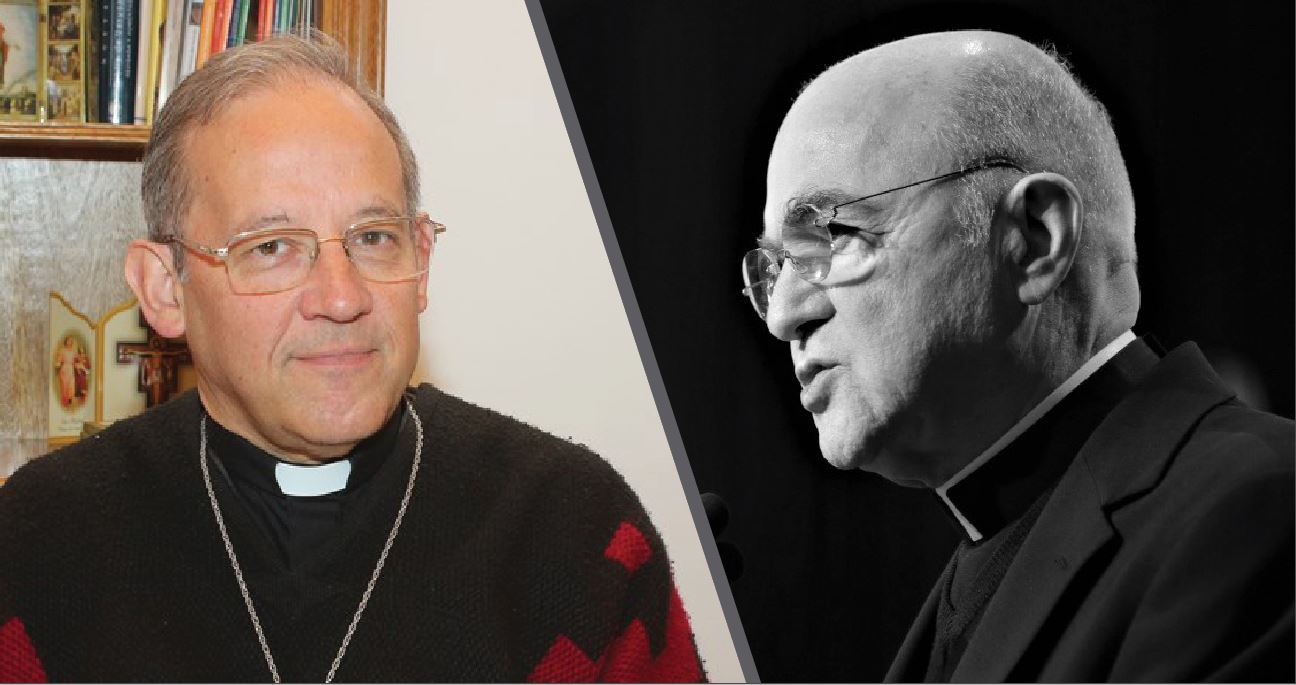 Introduction by Michael J. Matt: Early this morning, a Remnant reader in Argentina sent some background information on this unfolding story. According to our correspondent, liberal Bishop Eduardo Taussig of the Diocese of San Rafael, Mendoza, Argentina, will be transferred soon, after a controversial tenure during which he reportedly alienated some of the faithful by imposing communion in the hand and other progressive initiatives. Again, according to our correspondent, Bishop Taussig had already negotiated his exit with Pope Francis, but decided first to close down the best Seminary in Argentina: the Diocesan Seminary of San Rafael, founded by Msgr. León Kruk and led by the late Father Alberto Ezcurra and many other excellent theologians and professors.

In light of this unfortunate development, I’m pleased to publish Archbishop Carlo Maria Viganò’s open letter to Bishop Taussig regarding this latest ecclesial scandal out of Argentina.  MJM

I am confused and hurt to hear the news in the international press about the decision to close the Seminary of the Diocese of San Rafael and to dismiss its Rector, Fr. Alejandro Miguel Ciarrocchi.

This decision is said to have been adopted, at your zealous insistence, by the Congregation for the Clergy, which considered inadmissible the refusal on the part of clerics under your jurisdiction to administer and receive the Most Holy Eucharist on the hand rather than on the tongue. I imagined that the laudable and coherent behavior of the priests, clerics, and faithful of San Rafael offered you an excellent excuse to close the largest seminary in Argentina and to disperse the seminarians in order to re-educate them elsewhere, in seminaries that are so exemplary that now they are empty. Your Excellency has done a very good job of translating the invitation to parrhesia [freedom, frankness] into action, in the name of which we are supposed to defeat the scourge of clericalism that has been denounced by the highest Throne.

I can understand your disappointment in seeing that, despite the relentless work of ultra-modernist indoctrination that has been carried out in the past few decades, there are still courageous priests and clerics who do not place the obeisance of the episcopal court ahead of the respect that is owed to the Blessed Sacrament; and I can imagine your vexation in seeing that that the lay faithful and even entire families – from what has been called “the Vendée of the Andes” – are following the good shepherds, of whom the Gospel says “the sheep recognize his voice,” and not the mercenaries who have “no concern for the sheep” (Jn 10: 4,13).

These episodes confirm the action of the Holy Spirit in the Church: the Paraclete infuses the gift of Fortitude in the humble and weakest and confounds the proud and powerful, manifesting faith in the August Sacrament of the Altar on the one hand and its culpable profanation out of human respect on the other. Conforming to the mentality of the world may perhaps gain for Your Excellency the easy and self-interested applause of the enemies of the Church, but it will not avoid either the unanimous disapproval of those who are good, nor even less the Judgment of God, who is truly present under the veil of the Eucharist in His Body, Blood, Soul, and Divinity, and who asks the Sacred Pastors to be His witnesses, not His betrayers and persecutors.

Join the Rosary Crusade (includes orginial prayer by + Viganò) for the Re-Election of Donald Trump!

Your Excellency will permit me to point out to you a certain inconsistency of your behavior with the motto you have chosen for your episcopal coat of arms: Paterna Atque Fraterna Charitate [Paternal and Fraternal Charity]. I see nothing paternal about punishing priests who do not want to profane the Sacred Host, nor any form of true charity towards those who have disobeyed an inadmissible order. Charity is exercised in service of the Good and the True: if it has error as its origin and evil as its end, it can only be a grotesque parody of the virtue. A bishop who, instead of defending the honor owed to the King of Kings and praising those who strive for this noble purpose, even goes so far as to close a flourishing seminary and to publicly reprimand his clerics is not performing an act of charity but rather a deplorable abuse, for which he will be called to respond before the judgment seat of God. I pray that you will understand how serious your action is, considered sub specie aeternitatis, both in itself and also because of the scandal it causes to the little ones. Your studies at the Angelicum ought to help Your Excellency in this work of healthy repentance, which also imposes sub gravi the duty of reparation.

The press relates that in the Diocese of Basel [Switzerland], in the church of Rigi-Kaltbad, a woman wearing sacred vestments regularly simulates the celebration of the Mass, in the absence of an ordained priest, omitting only the words of the Consecration. I wonder whether Bishop Felix Gmür of Basel will distinguish himself with the same zeal that you have, having recourse to the Roman Dicasteries to punish in an exemplary way the sacrilegious simulation of the Mass. I fear however that the inflexibility you have demonstrated in punishing the priests who have dutifully disobeyed you will not be emulated in Switzerland. Certainly, if a priest had celebrated Mass in the Tridentine Rite on that same altar in Rigi-Kaltbad, the arrows of the Ordinary would not have delayed to shoot him down, but a woman who “celebrates Mass” abusively and sacrilegiously is today considered a negligible thing, just like exposing the Blessed Sacrament of the Altar to desecration.

Together with the clerics and laity of your diocese, whom you have unjustly punished and seriously offended, I pray for you, Your Excellency, for the officials of the Holy See, and in particular for Cardinal Beniamino Stella, whom I knew as a devoted priest and a faithful Apostolic Nuncio, whom I visited in Bogotà in my capacity as Delegate for the Pontifical Representations. He was once my friend; I collaborated with him for years in the Secretariat of State. Unfortunately for some time now I can no longer recognize him as such, because of his participation in the demolition of the Church of Christ.

We pray for your conversion, a conversion to which we are all called, but that should no longer be deferred by those who are working not for the glory of God but against the good of souls and the honor of the Church.

Let us all pray for the seminarians and faithful of San Rafael, on whom you, Your Excellency, have declared war.

With fraternal Charity, in the Truth,

[Comment Guidelines - Click to view]
The Remnant values the comments and input of our visitors. It’s no secret, however, that trolls exist, and trolls can do a lot of damage to a brand. Therefore, our comments are heavily monitored 24/7 by Remnant moderators around the country.  They have been instructed to remove demeaning, hostile, needlessly combative, racist, Christophobic comments, and streams not related to the storyline. Multiple comments from one person under a story are also discouraged. Capitalized sentences or comments will be removed (Internet shouting).
The Remnant comments sections are not designed for frequent personal blogging, on-going debates or theological or other disputes between commenters. Please understand that we pay our writers to defend The Remnant’s editorial positions. We thus acknowledge no moral obligation whatsoever to allow anyone and everyone to try to undermine our editorial policy and create a general nuisance on our website.  Therefore, Remnant moderators reserve the right to edit or remove comments, and comments do not necessarily represent the views of The Remnant.
back to top
Last modified on Thursday, July 30, 2020
Tweet

More in this category: « LETTERS FROM HELL: A Native New Yorker Can't Believe what Life has Become