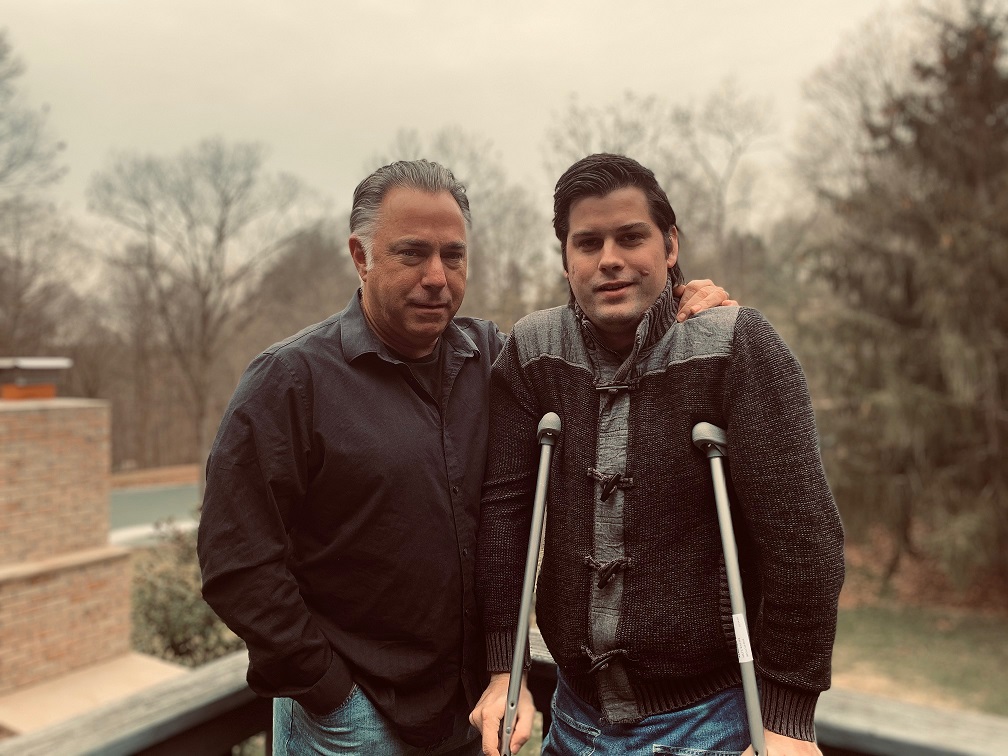 It’s every parent’s worst nightmare.  A telephone call in the middle of the night. A social worker in a hospital a thousand miles away: “Your son has been in a life-threatening accident and had a traumatic amputation of his foot.  He’s in emergency surgery now. No, we don’t know anything more at this time.”

Everything real—and I mean everything—screeches to a halt, as the nightmare of the surreal begins.

Remnant followers will know my son Walter’s work, even if you don’t know him personally.  A communication arts major at Franciscan University, he’s been my ‘righthand man’ at Remnant TV for several years and one of my favorite people in the world for a lot longer than that.

Walter and I have walked many pilgrimages to Chartres, France together and, a few years ago, he set up the first American contingent of “tent builders”, where he and his friends devote their pilgrimage each year to building tents and helping the French set up camp for 10,000 pilgrims.

And now this—a distant voice on the other end of the line, telling his parents and six siblings that something terrible has happened to their brother and son.

I hung up the phone, we prayed the rosary, and waited to hear what would happen next.  By sunrise, I had all but convinced myself that Walter wouldn’t make it out of surgery.

God, Our Lady, prayers, guardian angels— in the debilitating helplessness of that night, those became the only tangible realities that mattered.

The phone rang again. Walter’s sister Alexandra had driven to Pittsburgh to be with him in the hospital. “He’s going to make it, Dad. Walter’s not going to die.”

It wasn’t a miracle, but it felt like one.

And then the weird scramble began. Flights were booked and rides arranged as the family scattered in different directions to confront the crisis head-on. The little ones went to Grandma’s house. My wife took a plane to Pittsburgh to be with him. And, incredibly, I found myself on an airplane to Munich.

It seemed all wrong, but from his post-op hospital bed, my son had practically begged me to go.

We’d been scheduled to go to Germany together to cover the Acies Ordinata for Remnant TV. Change of plans. Walter had to do something else now. Another surgery to remove even more of his leg, to make it clean and eventually ready for a prosthetic. He asked me not to change the plan for his sake. “Go to Germany, Dad. We’ve both got a job to do.”

So, there I was, feeling like my insides were being torn out, in Germany when the only place I wanted to be was in a hospital room in Pittsburgh.

And then something wonderful happened. Word got out that Walter was in a bad way, and over the course of the next week the outpouring of love and prayer from the Remnant family was overwhelming.

Masses were offered for Walter by everyone from Archbishop Carlo Maria Vigano, to Bishop Athanasius Schneider, to Walter’s boyhood pastor, Father John Echert, and so many other priests who’d learned of the accident and leapt into action.

It was truly humbling.

Priests from Franciscan came to be with my son. They were so kind to my wife, who loves her son as only a Catholic mother can, and who’d spent 12 years homeschooling him.

Father Ladis Cizik, Father David Rombold, Canons of the Institute of Christ the King Sovereign Priest in Pittsburgh came in the early morning hours to bring Holy Communion and hear my son’s confession.  One of them went the extra mile for my wife: “I spoke to the doctor. Walter does not need Extreme Unction. He’s going to be okay.” Priestly charity like that is Mother Church literally taking us under her wing.

And now time is moving on. Walter is recovering. I’m with him now, in fact, in the home of one of my oldest and dearest friends, who literally turned his house into a convalescence home after Walter was released from the hospital.

I’m moved to tears by the solicitude and Christian charity shown to my son, who will learn to walk again.  He has the challenge of his life ahead of him, yes, but he also has the faith to move mountains and the courage to make it happen.

But I’m just not sure he would be in this good place were it not for the tremendous outpouring of support and prayers, as well as the support of the Catholic friends with which my son is blessed at university. His tennis coach and teammates visited him in the hospital and his loyal roommates are like a troop of wonderful Catholic characters from a movie.  He has the support system, in other words, that money cannot buy. 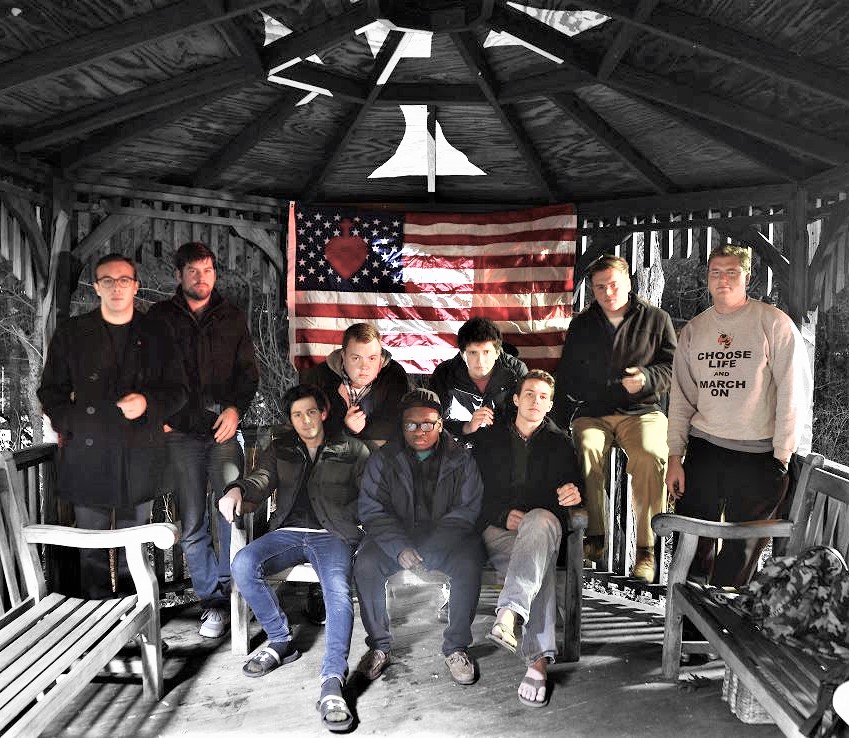 Walter (second-from-left) and a few of his close friends

So, there it is. I write these few words at my son’s request. He wants the Remnant family to know how grateful he is to you and to God, and to assure you of his commitment to recovery and to come out the other side ready to fight harder than ever for the Catholic cause we all share.

Please keep him in your prayers and accept the gratitude of his father and mother for the kindness and support you’ve shown our family during this ordeal.

I’d also ask you to be patient with customer service at The Remnant as our family scrambles to keep this apostolate on track. With the help of my eldest daughter, Cecelia, and my faithful assistant back in the office, Tess Mullins, we’ve managed to put the January issue of The Remnant on the press just a few days late and, so my son tells me, we intend to shoot a From the Editor’s Desk RTV program remotely in a few days. So, God willing, we’ll keep The Remnant afloat even despite this bitter broadside.

Everything happens for a reason. To God be all glory and honor.

Many thanks for your prayers and patience, and may God bless you all.

[Comment Guidelines - Click to view]
The Remnant values the comments and input of our visitors. It’s no secret, however, that trolls exist, and trolls can do a lot of damage to a brand. Therefore, our comments are heavily monitored 24/7 by Remnant moderators around the country.  They have been instructed to remove demeaning, hostile, needlessly combative, racist, Christophobic comments, and streams not related to the storyline. Multiple comments from one person under a story are also discouraged. Capitalized sentences or comments will be removed (Internet shouting).
The Remnant comments sections are not designed for frequent personal blogging, on-going debates or theological or other disputes between commenters. Please understand that we pay our writers to defend The Remnant’s editorial positions. We thus acknowledge no moral obligation whatsoever to allow anyone and everyone to try to undermine our editorial policy and create a general nuisance on our website.  Therefore, Remnant moderators reserve the right to edit or remove comments, and comments do not necessarily represent the views of The Remnant.
back to top
Last modified on Saturday, January 25, 2020
Tweet

More in this category: « HIPPIES in the VATICAN: A Groovy Kind of Synod MAJOR VATICAN EVENT: Schneider, Burke Speak During Amazon Synod »