God’s Take on Abortion: “Before I formed you in the womb, I knew you” 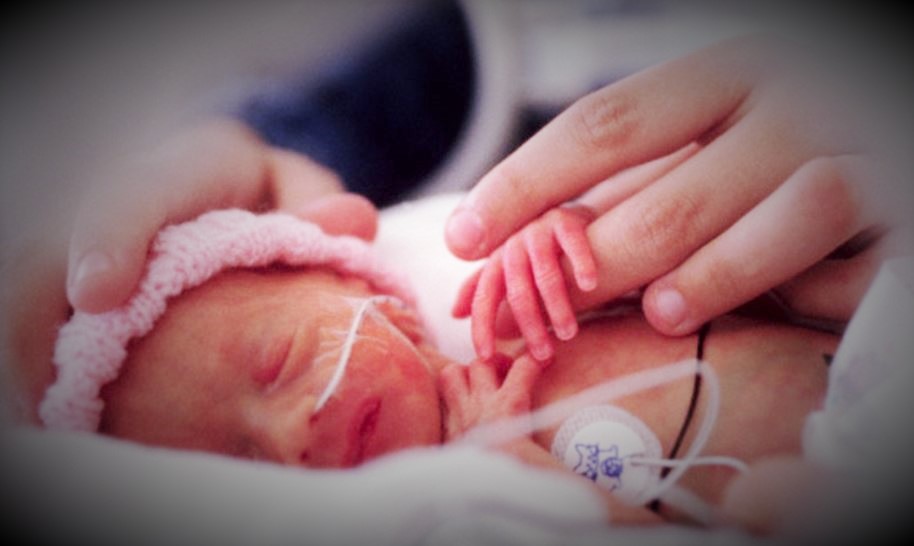 This beautiful quote from Jeremiah 1:5 shows that God loved us even before He formed us in our mother’s womb. We also know from Scripture that human life is distinct from all other forms of life on earth because in Genesis it is written: Then God said, “Let us make man in our image, in our likeness…”

So, given the unique nature of human life, it is deeply troubling that there were an estimated 56 million induced abortions worldwide each year between 2010 and 2014, and it’s thought that one in four pregnancies around the world now ends in abortion.

Whenever this subject is raised in the media, pro-choice campaigners are quick to highlight cases where the mother’s life would have been in danger had she not had an abortion, or where there were foetal abnormalities, or where a woman had fallen pregnant after having been raped.

However, research suggests that these three categories combined account for only 3% of all abortions. For example, in England and Wales in 2017 there were 192,900 abortions, of which 1.7% were carried out because of foetal abnormalities, the most common of which was Down’s Syndrome. 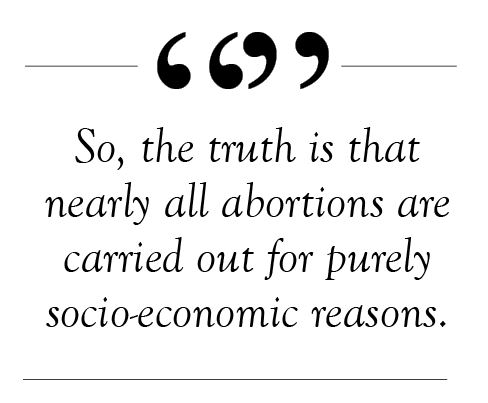 So, the truth is that nearly all abortions are carried out for purely socio-economic reasons. Abortions in the UK can still be carried out up to 24 weeks, despite the fact that about 60% of all babies born prematurely at 24 weeks now survive!

Pope John Paul II released the encyclical ‘Evangelium Vitae’ on the 25th of March 1995 concerning the inviolability of human life, and part of his encyclical covered the practice of abortion.

Evangelium Vitae 58: ‘Among all the crimes which can be committed against life, procured abortion has characteristics making it particularly serious and deplorable. The Second Vatican Council defines abortion, together with infanticide, as an ‘unspeakable crime.’’

Evangelium Vitae 61: ‘The texts of Sacred Scripture never address the question of deliberate abortion and so do not directly and specifically condemn it. But they show such great respect for the human being in the mother’s womb that they require as a logical consequence that God’s commandment “You shall not kill” be extended to the unborn child as well.’

Evangelium Vitae 62: ‘Given such unanimity in the doctrinal and disciplinary tradition of the Church, Paul VI was able to declare that this tradition (regarding abortion) is unchanged and unchangeable. Therefore, by the authority which Christ conferred upon Peter and his Successors, in communion with the Bishops - who on various occasions have condemned abortion and who in the aforementioned consultation, albeit dispersed throughout the world, have shown unanimous agreement concerning this doctrine - I declare that direct abortion, that is, abortion willed as an end or as a means, always constitutes a grave moral disorder, since it is the deliberate killing of an innocent human being.’

It’s interesting that the accidental harming or killing of an unborn child is described in Exodus 21:22:

“If men who are fighting hit a pregnant woman and she gives birth prematurely but there is no serious injury, the offender must be fined whatever the woman’s husband demands and the court allows. But if there is serious injury, you are to take life for life, eye for eye, tooth for tooth, hand for hand, foot for foot, burn for burn, wound for wound, bruise for bruise.” 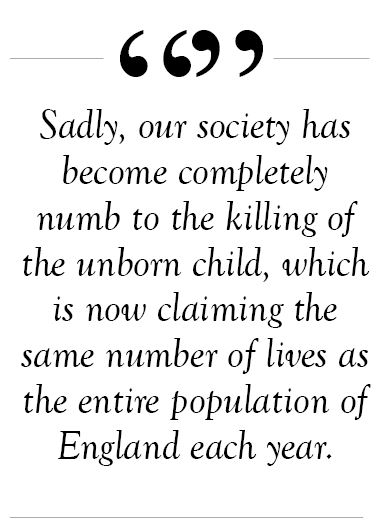 So, it’s clear from this text in Exodus that the protection of the unborn child was enshrined in Mosaic Law. Abortion was also described by Tertullian, one of the early theologians of the Church, in chapter 9, verse 8 of his work, the Apologeticum written around 197 AD:

“In our case, a murder being once for all forbidden, we may not destroy even the fetus in the womb, while as yet the human being derives blood from the other parts of the body for its sustenance. To hinder a birth is merely a speedier man-killing; nor does it matter whether you take away a life that is born, or destroy one that is coming to birth. That is a man which is going to be one; you have the fruit already in its seed.”

Sadly, our society has become completely numb to the killing of the unborn child, which is now claiming the same number of lives as the entire population of England each year. Pope Pius XII was able to describe our modern attitude to sin in a radio address which he made on the 26th of October 1946 to the U.S. National Catechetical Congress in Boston, when he said: ‘The sin of the century is the loss of the sense of sin.’

These words were later quoted by John Paul II at the Synod of Bishops in October 1983.

This article is a sneak peek of the August 15th Remnant Newspaper. Don't miss a single article--Subscribe today!

We often talk of the lack of positive role models in society, and when it comes to role models for mothers, we can turn to Mary for inspiration. At Guadalupe in December 1531, Our Lady appeared to Juan Diego as an expectant mother, just about to bring the Son of God into the world. She was wearing a black maternity bow of the same type that the Aztec women wore to show that they were with child, called a ‘nahui ollin’.  Her womb was an inviolate sanctuary protecting Jesus, and so Mary is surely the perfect model of motherhood and also the protector of the unborn child.

This was affirmed by Pope John Paul II on his visit to the Basilica of Our Lady of Guadalupe in 1999, when he entrusted the cause of life to her protection:

“Grant to our homes the grace of loving and respecting life in its beginnings, with the same love with which you conceived in your womb the life of the Son of God.”

So, what should our response as Catholics be when discussing an unwanted pregnancy with a friend or family member intent on having an abortion? Of course, we need to have great empathy for the person concerned, but our primary thought must surely be to protect the innocent life that she carries, and to gently guide her away from a termination. We should ask ourselves, “What would Jesus do in this situation?” and then call to mind the words written in Jeremiah: “Before I formed you in the womb, I knew you.”

Paul De Marco is the author of Fatima 2017, Bernadette of Lourdes, and Holy Mary of Guadalupe

[Comment Guidelines - Click to view]
The Remnant values the comments and input of our visitors. It’s no secret, however, that trolls exist, and trolls can do a lot of damage to a brand. Therefore, our comments are heavily monitored 24/7 by Remnant moderators around the country.  They have been instructed to remove demeaning, hostile, needlessly combative, racist, Christophobic comments, and streams not related to the storyline. Multiple comments from one person under a story are also discouraged. Capitalized sentences or comments will be removed (Internet shouting).
The Remnant comments sections are not designed for frequent personal blogging, on-going debates or theological or other disputes between commenters. Please understand that we pay our writers to defend The Remnant’s editorial positions. We thus acknowledge no moral obligation whatsoever to allow anyone and everyone to try to undermine our editorial policy and create a general nuisance on our website.  Therefore, Remnant moderators reserve the right to edit or remove comments, and comments do not necessarily represent the views of The Remnant.
back to top
Tweet
More in this category: « Italian Bishops on Gay Pride and Reparations (squirm, check watches) SAINT FRANCIS and the SULTAN: All About Conversion to Christ, Not Ecumenical Dialogue »