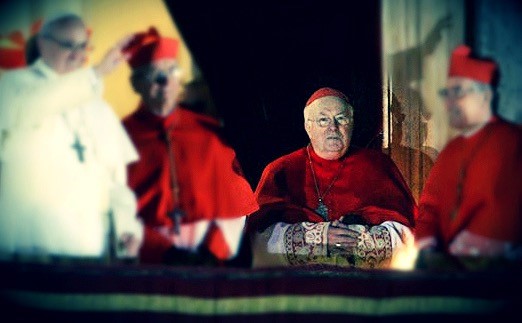 Thankfully, time marches on. Belgian Cardinal Godfried Danneels died on March 14th. This prince of the church proudly proclaimed his membership and allegiance in the “St. Gallen Mafia.” Unable to contain his ego any longer, Cardinal Danneels published his authorized biography in 2015, where he dropped the bombshell that he was a member of the St. Gallen Mafia that opposed Ratzinger’s election as pontiff, and sought to elevate Jorge Bergoglio to the papacy and radically reform the Catholic Church.

“The Sankt-Gallen group is a sort of posh name. But in reality we said of ourselves, and of that group: ‘The Mafia.’  --Danneels.

But now, the powerful Belgian Cardinal, the self-identified St. Gallen mafia member is dead, cold to the touch, decomposing into dust, and meeting his Almighty Judge. Will the Lord welcome Godfried Danneels into the celestial choir of angels because he is a “gentleman”, as John Allen of Crux obsequiously eulogized Danneels?

Or did he mean, the gentleman Mafia Don?

Be forewarned. Revisionist Church history is underway with Francis calling Danneels “dedicated to the Church” and “a zealous pastor.”

Pope Francis also waxed praise for Danneels by issuing a telegram eulogizing Danneels as a "zealous pastor," recalling his "dedication" as president of Belgian bishops and lauded his attentiveness to challenges of today's Church."

Be forewarned. Revisionist Church history is underway with Francis calling Danneels “dedicated to the Church” and “a zealous pastor.” The destructive record of this power-hungry prelate speaks volumes of his misplaced priorities.

During his 30-year reign from 1979-2010, as primate of Belgium, Cardinal Danneels oversaw the disastrous freefall of Catholicism in the once strongly Catholic country. Danneels presided over the precipitous secularization of Belgium which instituted abortion on demand, same-sex marriage, and euthanasia.

Is this a ‘dedicated Catholic pastor,’ Francis?

In June 2013, Danneels supported the legal recognition for same-sex couples in Belgium. He incomprehensibly argued that:

"The Church has never opposed the fact that there should exist a sort of 'marriage' between homosexuals, but one therefore speaks of a 'sort of' marriage, not of true marriage between a man and a woman, therefore another word must be found for the dictionary. About the fact that this should be legal, that it should be made legitimate through a law, about this the Church has nothing to say.”

Not surprisingly, under Danneels’ episcopacy, religious vocations sunk to a historic low and church attendance dropped to a pitiful 6%.

Is this a ‘zealous pastor’, Francis?

On April 8, 2010, the newly-retired Cardinal Danneels met with the nephew of his good friend, Bishop Roger Vangheluwe. The nephew described a sordid 13-year-long molestation by his uncle, Vangheluwe, the Bishop of Bruges.

Cardinal Danneels advised the nephew not to go public with the sexual abuse. During this meeting, Danneels advised the young man “not to make a lot of noise" about the abuse he endured from his uncle bishop because Vangheluwe was scheduled to retire in a year anyway. "It would be better that you wait," advised Danneels, while also urging the young man to forgive his uncle.

Is this an ‘attentive pastor’ to the challenges of the Church, Francis?

The conversation was tape recorded by the nephew and subsequently released to the press. Cardinal Danneels, the 30-year head of Belgium's Roman Catholic Church, could be heard on tape urging this sexual abuse victim to stay quiet and not disclose the abuse. That is a classic cover up. After the release of the recording, Danneels did not dispute the authenticity of the conversation.

Bishop/Uncle Vangheluwe admitted to the sexual abuse of his nephew and stepped down from his position shortly after the April 8 meeting. Because of the statute of limitations law, the Bishop of Bruges was never charged with the crime. However, the Danneels cover-up plot continued to unfold.

"The cardinal sometimes got angry and said it was not my job, that I should not get involved," DeVille said. Is this your definition of an ‘attentive and zealous pastor,’ Francis?

Cardinal Danneels’ clerical coverup of the Vangheluwe molestation case dominated European and global headlines for weeks. Yet, the Danneels scandal widened even further. Belgian Police conducted a surprise raid on the Cardinal’s residence and office looking for documents relating to clergy abuse and questioned the Cardinal for ten hours. Although the Cardinal was never charged, the Catholic Church’s own investigation commission issued a 200-page report on 10 September 2010.

According to the report, the commission heard allegations from 488 complainants, concerning incidents between 1950 and 1990. The report contained testimony from 124 people. Two-thirds of the complainants were men, now in their 50s and 60s. The head of the commission, Dr. Peter Adriaenssens, a prominent and respected psychiatrist, disclosed that Cardinal Godfried Danneels’ name surfaced in 50 cases, not as an abuser, but as someone who knew of the sexual child abuse by the clergy and did nothing.

The body count as a result of Danneels’ negligence and cover up of abuse resulted in 13 suicides of victims of clergy abuse in Belgium.

Is this an ‘attentive pastor’ to the challenges of the Church, Francis?

Catch Liz Yore in the March 31st issue of The Remnant Newspaper--Subscribe Today!

In 1998, a Catholic catechism textbook for Belgian children called Roeach 3 showed comic-book-style pictures of toddlers asking sexual questions and engaging in sexual play. The Belgian Catholic hierarchy, of which Danneels was the head, stated that the textbook was intended for adolescents, (as if that is a valid and Catholic justification) and that the pictures were meant to convey the idea that young children experience lust, a prevalent theory in contemporary psychology.

Catholic parents were enraged and demanded that the Catechism be pulled from classrooms. Danneels repeatedly rebuffed the parents’ requests for meetings and removal of the book. Ultimately, the textbook was withdrawn after Catholic parents were required to seek intervention from the Vatican.

It boggles the mind and rattles the soul that this Cardinal who oversaw the precipitous decline and destruction of the Catholic faith in Belgium, promoted the sexualization of children, served as a consulter on the future of the Catholic family as the personal appointment of Francis to the Synod on the Family in 2014.

That’s quite a legacy for a zealous and dedicated pastor!

In the classic tradition of a preening mafia don’s funeral, Danneels’ requiem will be a lavish display of pomp and circumstance, glowing tributes, with the pipe organ playing his beloved Bach, splendid floral displays, pews full of the princes of the European monarchy, those whom Danneels bowed down to.

Ah, yes, the floral displays honoring Danneels, the mafioso monsignor of St. Gallen, will be reminiscent of St. Catherine of Siena’s bitter denunciation of a similar Cardinal:

“What made you do this? The poison of self-love, which has infected the world. Flowers — you who shed no perfume, but only stench that makes the whole world reek! No lights you placed in a candlestick, that you might spread the faith; but, having hidden your light under the bushel of pride, and become not extenders, but contaminators of the faith, you shed darkness over yourself and others.”

“That evil which you have in yourself you wish to infect us with, withdrawing us from obedience to Christ on earth, and leading us into obedience to antichrist, a member of the devil, as you are too, so long as you shall abide in this heresy.”

Elizabeth Yore is an international child protection attorney who has investigated clerical abuse. She provided legal and technical advice to the Belgian victim parents of the children abducted and murdered by Belgian pedophile serial killer, Marc Dutroux.

[Comment Guidelines - Click to view]
The Remnant values the comments and input of our visitors. It’s no secret, however, that trolls exist, and trolls can do a lot of damage to a brand. Therefore, our comments are heavily monitored 24/7 by Remnant moderators around the country.  They have been instructed to remove demeaning, hostile, needlessly combative, racist, Christophobic comments, and streams not related to the storyline. Multiple comments from one person under a story are also discouraged. Capitalized sentences or comments will be removed (Internet shouting).
The Remnant comments sections are not designed for frequent personal blogging, on-going debates or theological or other disputes between commenters. Please understand that we pay our writers to defend The Remnant’s editorial positions. We thus acknowledge no moral obligation whatsoever to allow anyone and everyone to try to undermine our editorial policy and create a general nuisance on our website.  Therefore, Remnant moderators reserve the right to edit or remove comments, and comments do not necessarily represent the views of The Remnant.
back to top
Last modified on Thursday, March 21, 2019
Tweet

More in this category: « Viganò Speaks, Vatican Cover-up Continues STANDING WITH GOD & THE UNBORN: Trump, Pence Do It Again »