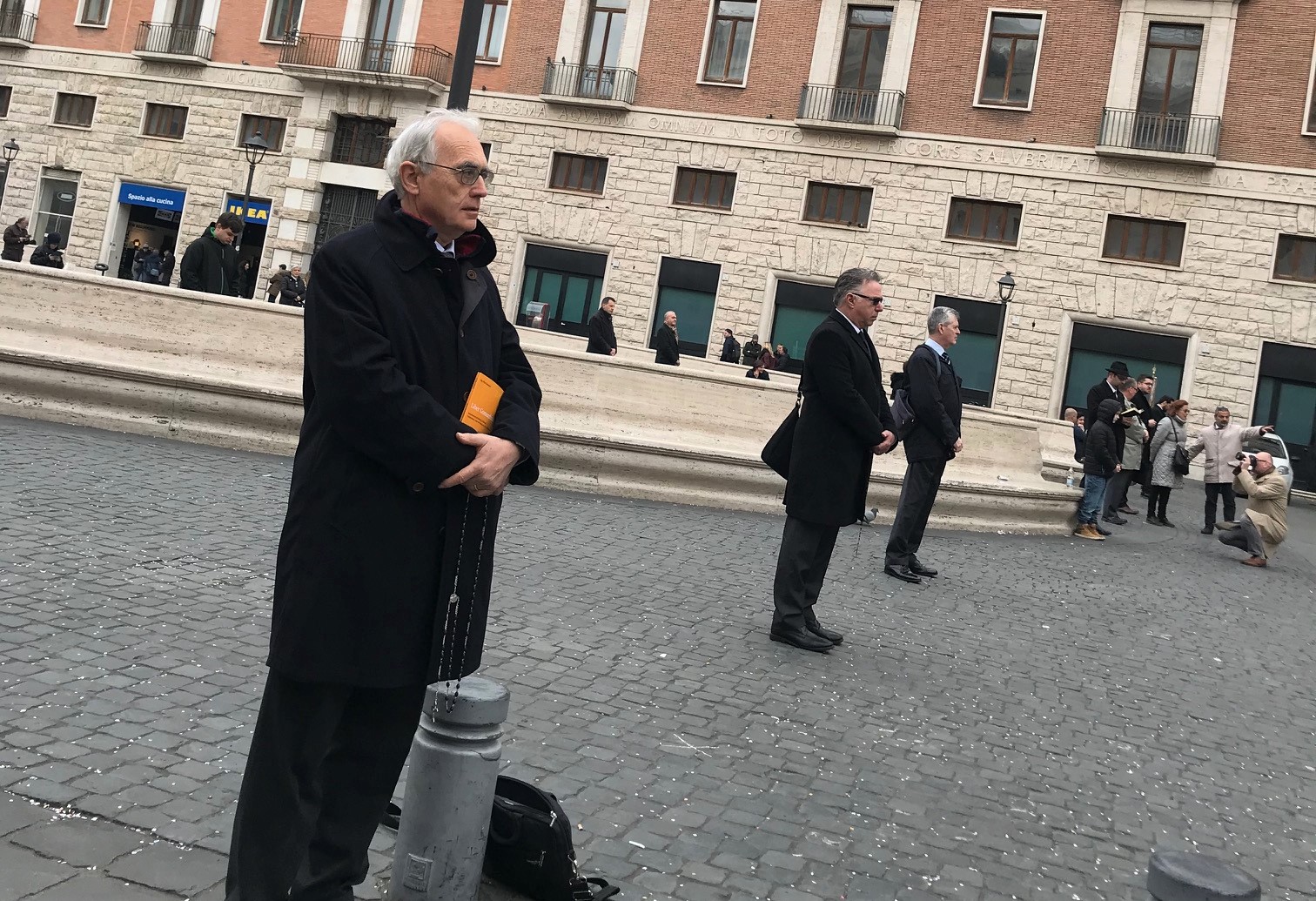 I’m writing tonight in the shadow of St. Peter’s Basilica, having just participated in the Stop the Silence public demonstration organized by our friends and allies of the international coalition called Acies Ordinata here in Rome. This demonstration concluded with a press conference in which Catholic representatives from Poland, Canada, the US, Italy, France, and England addressed mainstream media reporters from the AP, ABCNews, the Tablet, and many others.

The goal of this event was to call on the Vatican to address the root cause of the clerical sexual abuse crisis in the Church—homosexuality in the priesthood—not merely the abuse of minors. The demonstration itself included about 100 Catholic activists taking over the Piazza San Silvestro, in silent and prayerful witness to the many hundreds of thousands of Catholics around the world who have lost confidence in the Vatican’s desire and ability to confront this crisis.

Tomorrow our RTV team here in Vatican City will present video coverage of this extraordinary event, but tonight I wanted to share with our readers the exciting news that the prayers of Catholics around the world have been answered in the form of a poignant and powerful intervention against Vatican silence on the part of two high-ranking cardinals of the Catholic Church.

The letter appears below. We encourage our readers to continue to pray that this letter has the desired effect that its courageous authors intend. God bless and protect Cardinals Burke and Brandmüller.

OPEN LETTER TO THE PRESIDENTS OF THE CONFERENCES OF BISHOPS

Dear Brothers, Presidents of the Conferences of Bishops,

We turn to you with deep distress!

The Catholic world is adrift, and, with anguish, the question is asked: Where is the Church going?

Before the drift in process, it seems that the difficulty is reduced to that of the abuse of minors, a horrible crime, especially when it is perpetrated by a priest, which is, however, only part of a much greater crisis. The plague of the homosexual agenda has been spread within the Church, promoted by organized networks and protected by a climate of complicity and a conspiracy of silence. The roots of this phenomenon are clearly found in that atmosphere of materialism, of relativism and of hedonism, in which the existence of an absolute moral law, that is without exceptions, is openly called into question.

Sexual abuse is blamed on clericalism. But the first and primary fault of the clergy does not rest in the abuse of power but in having gone away from the truth of the Gospel. The even public denial, by words and by acts, of the divine and natural law, is at the root of the evil that corrupts certain circles in the Church.

In the face of this situation, Cardinals and Bishops are silent. Will you also be silent on the occasion of the meeting called in the Vatican for this coming February 21st?

We are among those who in 2016 presented to the Holy Father certain questions, “dubia,” which were dividing the Church in the wake of the conclusions of the Synod on the Family. Today, those “dubia” have not only not had any response but are part of a more general crisis of the Faith. Therefore, we encourage you to raise your voice to safeguard and proclaim the integrity of the doctrine of the Church.

We pray to the Holy Spirit, that He may assist the Church and bring light to the Pastors who guide her. A decisive act now is urgent and necessary. We trust in the Lord Who has promised: “Behold I am with you all days, even to the consummation of the world” (Mt 28,20).

[Comment Guidelines - Click to view]
The Remnant values the comments and input of our visitors. It’s no secret, however, that trolls exist, and trolls can do a lot of damage to a brand. Therefore, our comments are heavily monitored 24/7 by Remnant moderators around the country.  They have been instructed to remove demeaning, hostile, needlessly combative, racist, Christophobic comments, and streams not related to the storyline. Multiple comments from one person under a story are also discouraged. Capitalized sentences or comments will be removed (Internet shouting).
The Remnant comments sections are not designed for frequent personal blogging, on-going debates or theological or other disputes between commenters. Please understand that we pay our writers to defend The Remnant’s editorial positions. We thus acknowledge no moral obligation whatsoever to allow anyone and everyone to try to undermine our editorial policy and create a general nuisance on our website.  Therefore, Remnant moderators reserve the right to edit or remove comments, and comments do not necessarily represent the views of The Remnant.
back to top
Last modified on Wednesday, February 20, 2019
Tweet