BIG ABORTION IN THE BIG APPLE: Is America's Two-Child Policy Next? 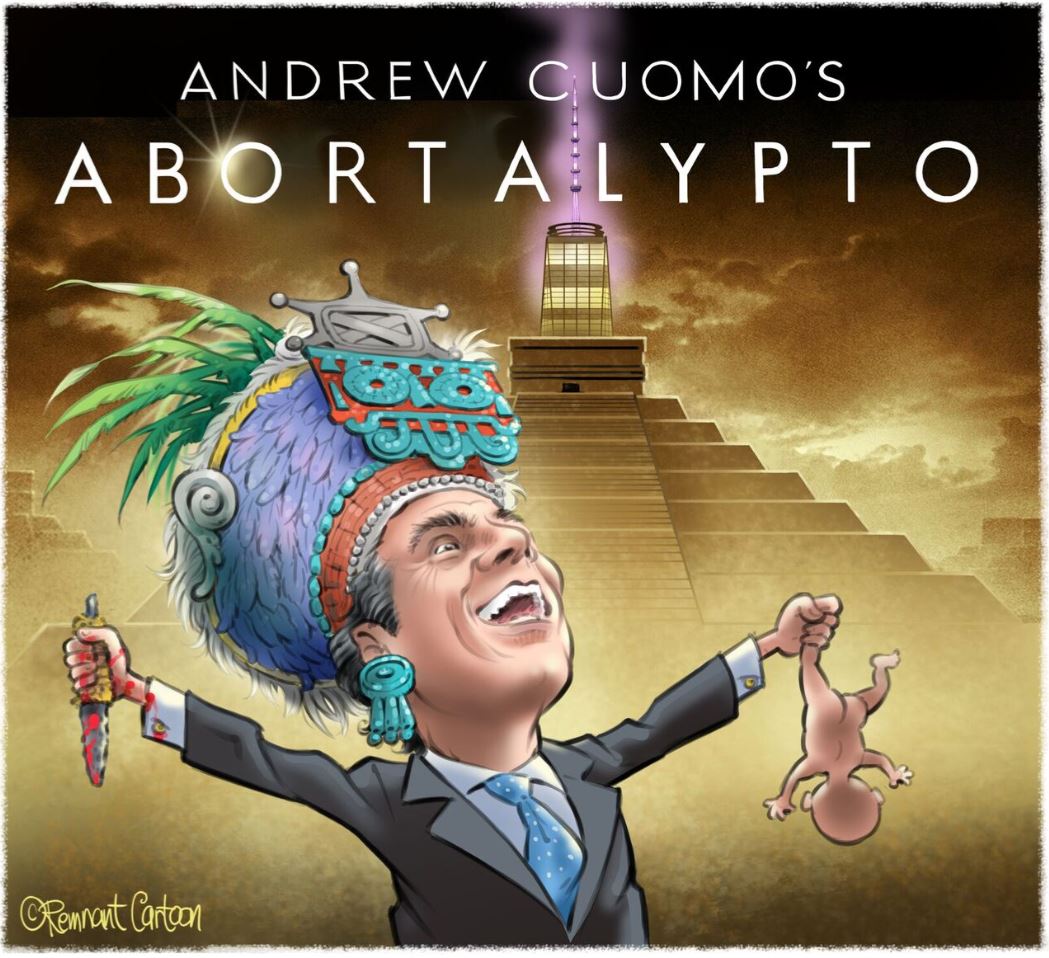 New York reached a new depth of evil on January 22, 2019, when The Reproductive Health Act passed with a 38-28 vote and was signed into law by New York Gov. Andrew Cuomo -- a...ahem...Catholic.

"With the signing of this bill, we are sending a clear message that whatever happens in Washington, women in New York will always have the fundamental right to control their own body," Cuomo said.

On the other hand, what about the little 9-month-old's fundamental right to control her own body? I guess Andy, an obvious misogynist, is only down with feminists old enough to vote. So, it's open season on little women.

Isn't this worse than pedophilia, by the way? Even the most monstrous pedophile will usually stop short of actually murdering the little girl. He needs to be locked up for life, even though he didn't poison her, hack her limb from limb, stand there and wait until she stops breathing—as Cuomo wants abortion providers to do.

I'd say it's little wonder people are comparing this creep Cuomo to Joseph Goebbels but that might not be fair....to Goebbels:

The act states, "every individual who becomes pregnant has the fundamental right to choose to carry the pregnancy to term, to give birth to a child, or to have an abortion."

Even up to the child’s birthday, in fact, for the “health” of the mother, which is not defined and has been interpreted by the Supreme Court to include, basically, any reason.

This is its own brand of sick.

But not to worry. Cardinal Dolan's pretty wrecked about this new law too which, according to His Eminence, is "letting down" the cute little babies:

"The New York community is rightly celebrated for its warm welcome to immigrants, for its hospitality, sense of embrace and inclusion, and gritty sensitivity for those in need. But we are tragically letting down the tiniest, most fragile and vulnerable: the little baby in the womb. ... I invite all to come together to make abortion rare, a goal even those who work to expand the abortion license tell us they share."

"Letting them down?" That's like saying the Titantic "took on some water."

And the anathema sit?  Fuhgettaboutit!  His Eminence's got friends in New York...lots of 'em!  But he did invite the demons to cool it on the baby-killing most of time. So, there's that. 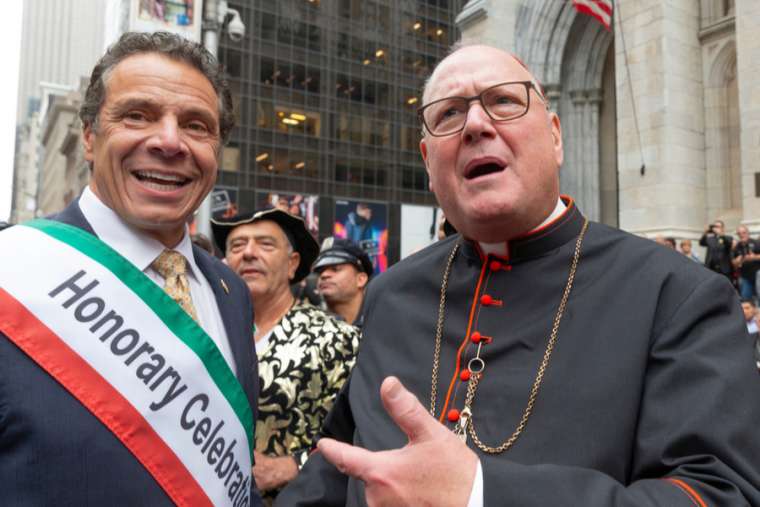 You’re one hell of a shepherd, Eminence!

Back in 1996, Bill Clinton famously coined the term “safe, legal, and rare” to describe the Democrats' policy outlook on abortion. Twenty years later, the Cardinal Archbishop of New York sounds more like Bill Clinton than Lila Rose, who reacted to the pasing of the RHA like this:

New York Senate cheers today for legalization of killing a baby old enough to born - poisoning a 6 month old to death in the womb & delivering her in pieces. This is the legacy of #Roe. It's time to end this barbarism."

We can sit around and talk about ancient civilizations and call them barbaric, yet we sacrifice little babies…  Millions upon millions of innocent little human beings, who have no chance of defending themselves, are placed in the safest environment that God could place them in, and we found a way to go in there and murder them.”

By the way, the law also removes abortion from the definition of homicide and New York's criminal code altogether. Previously, New York law treated the murder of an unborn child in its the third trimester as a felony offense punishable by up to seven years in prison. Not any more. So, this bill has stripped all possible legal protections for even pre-born women past 24 weeks in the womb.

Also, abortion will be regulated under public health law and a variety of medical professionals, not just licensed physicians, will be allowed to perform abortions without penalty.  So, the sick psycho Kermit Gosnell needs a Get Out Of Jail Free card, too. 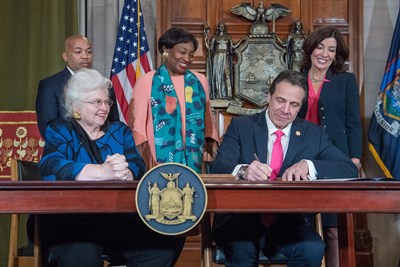 And, remember this: As New York goes, so goes the world.

Obviously, abortion in 2019 has little to do with women’s reproductive health or the rights of teenagers to terminate unplanned pregnancies.

Ours has become a society of experts on the prevention of conception, with entire generations of kids having been schooled in the black arts of the most sophisticated contraception methods in the history of the world.

Surgical abortion, in other words, is not nearly as “necessary” as it once was, even for a promiscuous society like ours.

And yet our political leaders and social elites are more fanatically committed to its unrestricted access and legalization than ever before.

Because abortion is ritual sacrifice and they are giving themselves over to the demonic. Abortion is sacrificial bloodletting, an inverted sacrament; a blood oath to proudly and publicly damn our own souls to hell under the full protection of law.

One proves loyalty to the regime of Antichrist by approving the ritual killing of the unborn.

And one can only imagine where this Luciferian depravity will end up. Now that they've legalized infanticide in America, it's no big deal for the population-controlling sustainable development crowd to hit up Soros for the next thing: Mandatory birth regulation laws.

America may get her very own two-child policy before we know it. And then the world will live as one --  one big Kingdom of Antichrist called the New World Order.

[Comment Guidelines - Click to view]
The Remnant values the comments and input of our visitors. It’s no secret, however, that trolls exist, and trolls can do a lot of damage to a brand. Therefore, our comments are heavily monitored 24/7 by Remnant moderators around the country.  They have been instructed to remove demeaning, hostile, needlessly combative, racist, Christophobic comments, and streams not related to the storyline. Multiple comments from one person under a story are also discouraged. Capitalized sentences or comments will be removed (Internet shouting).
The Remnant comments sections are not designed for frequent personal blogging, on-going debates or theological or other disputes between commenters. Please understand that we pay our writers to defend The Remnant’s editorial positions. We thus acknowledge no moral obligation whatsoever to allow anyone and everyone to try to undermine our editorial policy and create a general nuisance on our website.  Therefore, Remnant moderators reserve the right to edit or remove comments, and comments do not necessarily represent the views of The Remnant.
back to top
Last modified on Saturday, January 26, 2019
Tweet

More in this category: « ANATOMY OF A COVERUP: Francis, Vatican Exposed STOP THE BLEEDING: Why Pro-Abort Politicians Must be Expelled from the Catholic Church »